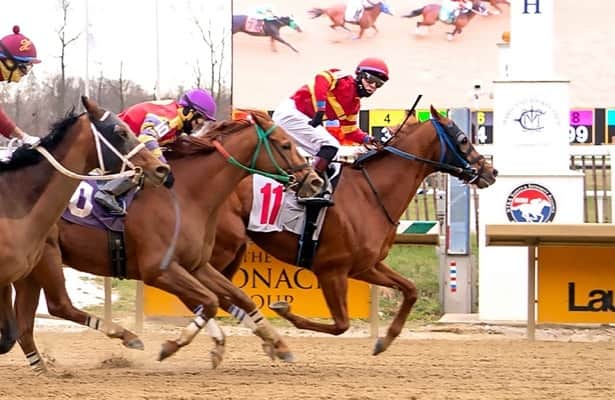 Flat Rate ($69.80), a 4-year-old Violence gelding owned by Top Notch Racing, ran 5 1/2 furlongs in 1:05.90 over a fast main track in the beaten claimer for 3 year olds and up to earn his fourth career victory and first since joining trainer Michael Jones Jr.

Hiraldo, 19, is a native of Puerto Rico who galloped horses for trainer Brittany Russell before making his professional debut running fourth on Maximo Strong Dec. 10 at Laurel. Hiraldo had gone winless in his first 18 mounts, including a third on Frontier Woman in Thursday’s third race.

“My cousin, Angel Cruz, he has been a big part of my short career. Xavier [Perez], Sheldon [Russell]. Sheldon is one of the best ones in there. He’s a great guy on and off the racetrack and he’s been a good mentor for me,” Hiraldo said.

Angel Cruz is member of Laurel Park’s riding colony who won with Dance and Dance ($16.60) Thursday and finished sixth in the fall meet standings with 20 wins. Hiraldo’s father, Joel, won 200 races between 2001 and 2011, the last coming at Charles Town.

“When I was growing up, my dad was a jockey so he was the person I would always look up to. I would go to school and always think about riding. I didn’t care about the grades, I just wanted to go to be a jockey when I grew up,” Hiraldo said.

“When I grew up I went to the farm and started learning as much as I could. I came back and was here for a couple months working for Brittany Russell. I have to thank her for all her help. I just felt like it was the right time to do it.”