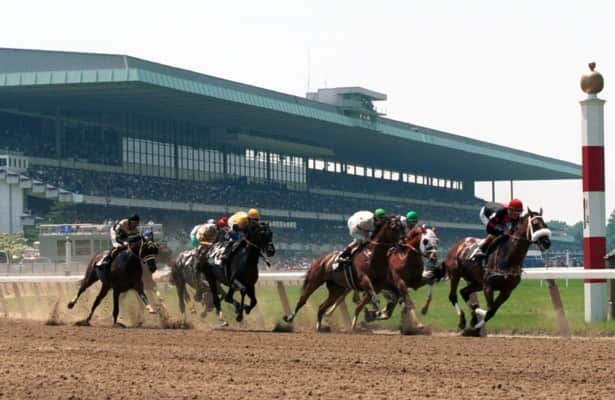 Godolphin’s Irish homebred Nations Pride will look to continue a tremendous run of form in North America for trainer Charlie Appleby when he takes on an international field of 13 in Saturday’s Grade 1, $1 million Belmont Derby Invitational, a 1 1/4-mile inner-turf test for sophomores at Belmont Park.

Appleby made a splash last summer in New York with Althiqa and Summer Romance running 1-2 in both the Just a Game (G1) at Belmont and the Diana (G1) at the Spa. He sent over Yibir in the fall to capture the Jockey Club Derby at Belmont ahead of a score in the Breeders' Cup Turf at Del Mar en route to champion turf male honors. His Breeders’ Cup successes also included Space Blues in the Mile and Modern Games in the Juvenile Turf.

On Saturday, he will saddle Nations Pride, who exits an eighth-place finish in the 12-furlong Group 1 Epsom Derby on June 4, which came five weeks after a seven-length romp over subsequent Derby runner-up Hoo Ya Mal in the 10-furlong listed Newmarket Stakes.

Nations Pride had a four-race win streak snapped at Epsom, with his three previous wins all coming on flat courses at 10 furlongs, including a 3 1/4-length score in the Jumeirah Derby at Meydan in Dubai. The son of Teofilo is a grandson of Group 1 winner and 2006 Breeders’ Cup Filly & Mare Turf fifth Satwa Queen, a 10-furlong specialist.

Appleby said Nations Pride should appreciate firmer footing as he cuts back in distance.

“He just didn’t stay in the English Derby. It’s as simple as that and the ground would have been a question,” Appleby said. “The quicker the ground, the better for him and he’s proven that already at Meydan’s quick, sound surface. More importantly, coming back to the 10 furlongs will suit. He stays that well and on a sound surface, especially. He’s coming over there in good order and I think he’ll be a live player.”

The Galileo colt ran a strong second as a maiden in the Criterium de Saint-Cloud (G1) in October before graduating in March at Navan in his seasonal debut. Stone Age followed with an eye-catching score in the Derby Trial (G3) at Leopardstown over 10 furlongs before finishing sixth last out in the 12-furlong Epsom Derby as the second choice.

Hall of Fame trainer Todd Pletcher will be in search of a third Belmont Derby score after wins by Finality (2002) and Take the Points (2009) when he sends out graded-stakes winners Emmanuel and Grand Sonata.

Emmanuel, by More Than Ready, made a winning turf debut last out with a gate-to-wire score in the nine-furlong Pennine Ridge (G2) on June 4 at Belmont.

Owned by WinStar Farm and Siena Farm, the versatile colt made his first five starts on dirt, graduating in December at Gulfstream Park ahead of an optional-claiming win in January at Tampa Bay Downs. Emmanuel tried his luck on the Kentucky Derby trail, finishing fourth in the Fountain of Youth (G2) at Gulfstream ahead of a third-place finish in the Blue Grass (G1) at Keeneland.

Pletcher said Emmanuel breezed well on the green ahead of his turf debut.

“He worked well on the turf and we felt like the Pennine Ridge was the logical place to give it a try. It was a good prep for the Belmont Derby,” Pletcher said. “He took to it and we’re happy to step it up and give it a try. I think the mile and a quarter should be within his scope.”

Grand Sonata, a Whisper Hill Farm Kentucky homebred, launched his campaign with a pair of stakes scores on the Gulfstream turf, capturing the one-mile Dania Beach on New Year’s Day and the 1 1/16-mile Kitten’s Joy (G3) in February. He returned in April to finish a close second to Belmont Derby rival Sy Dog in the 1 1/16-mile Transylvania (G3) before a deep-closing third last out in the nine-furlong Audubon on June 4 at Churchill Downs.

“That was kind of a tricky course to go wide on,” Pletcher said. “He didn’t get away well and was in a compromised position. But he ran well and he’s been very consistent.”

Irad Ortiz Jr. will pilot Emmanuel from post 11, while Grand Sonata will emerge from post 5 under Tyler Gaffalione.

Tiz the Bomb returns to turf after a ninth-place finish in the Kentucky Derby on May 7 at Churchill Downs.

The Hit It a Bomb colt boasts wins on dirt, turf and synthetic and posted turf scores in the Kentucky Downs Juvenile Mile in September and the Bourbon (G2) in October at Keeneland. He completed his 2-year-old season by rallying to finish second in the Breeders' Cup Juvenile Turf in November at Del Mar.

The Kentucky-bred millionaire returned with an off-the-board effort in the Holy Bull (G3) in February over the Gulfstream Park dirt before taking both the John Battaglia Memorial in March and Jeff Ruby Steaks (G3) in April over the Turfway Park synthetic, defeating a field that included subsequent Kentucky Derby winner Rich Strike.

McPeek said Tiz the Bomb will relish the conditions.

“I think the further the better with him. He's all class,” McPeek said. “A mile and a sixteenth has been easy enough for him but I think he should be able to get into a nice rhythm, and I think he'll have a big shot in the race.

"He's doing really well," McPeek added. "He's been training here in Kentucky on the grass all spring since the Derby and we're excited to get him back on turf.”

Classic Causeway will make his turf debut in his second start for McPeek. The Giant’s Causeway chestnut captured the Sam F. Davis (G3) and Grade 2 Tampa Bay Derby over the winter at Tampa Bay Downs before finishing 11th in both the Florida Derby (G1) at Gulfstream and Kentucky Derby for his former conditioner Brian Lynch. He enters from a prominent third in the nine-furlong Ohio Derby (G3) on June 25 at Thistledown.

"He's a horse that it seems like pace dictates his game. I think the pace in a mile and a quarter race will suit him better than the pace in a mile race," McPeek said. "He's a lovely horse to be around. It's definitely a switch in his game, but we galloped him on the grass at Saratoga and he's got a foot that I think will suit the turf.”

Stolen Base, trained by Mike Maker for Three Diamonds Farm and Deuce Greathouse, enters from a rallying 1 1/4-length score in the 1 1/16-mile American Turf (G2) on May 7 at Churchill Downs, where Sy Dog ran third.

The versatile colt is a winner on dirt and turf as well as stakes-placed on synthetic when a close second to returning rival Tiz the Bomb in the John Battaglia Memorial in March at Turfway Park.

Sy Dog, by Slumber, won his first three career starts, including a nose score in the 1 1/16-mile Central Park in November at the Big A ahead of a closing three-quarter length win in the Transylvania (G3). Owned by Head of Plains Partners, he was a rallying third last out in the American Turf (G2).

Four-time Eclipse Award-winning trainer Chad Brown will send out the Peter Brant homebred Napoleonic War, who finished a game second to Emmanuel last out in the Pennine Ridge.

“He was pace compromised, but he ran well last time,” Brown said. “He finished up well. He’s probably looking for a mile and a quarter and so we’ll see if he can step up to this class level.”

The War Front bay was a troubled fourth to Sy Dog in the Transylvania ahead of a determined nose score in an optional-claimer here on May 5.

Napoleonic War will emerge from post 3 under Flavien Prat.

Abdullah Almaddah’s Implementation, a homebred son of Constitution trained by Pia Brandt, exits an even effort when last of four in the one-mile Prix Paul de Moussac (G3) at Chantilly over good-to-soft ground. One race prior, he was third in the nine-furlong Prix de Guiche (G3) to subsequent Prix du Jockey Club (French Derby, G1) and Coral-Eclipse (G1) winner Vadeni.

He will leave the inside post in rein to Hall of Famer John Velazquez.

Rashit Shaykhutdinov’s Machete, trained by Fabrice Chappet, chased home Vadeni in his past two starts – a seventh in the French Derby on June 5 and a second in the Prix de Guiche, a head in front of Implementation. Earlier this season, Machete soundly defeated Implementation by two lengths in Chantilly’s Listed Prix Maurice Caillault at nine furlongs over its flat all-weather course.

Multiple graded stakes-placed Limited Liability (post 12, Jose Ortiz) was last seen finishing third to Emmanuel in the Pennine Ridge for Hall of Fame trainer Shug McGaughey and owner/breeder Stuart S. Janney III. He earned another pair of graded placings when third in both the With Anticipation (G3) and Pilgrim (G2) behind Annapolis last year.

Each of the 13 contenders are assigned 122 pounds.