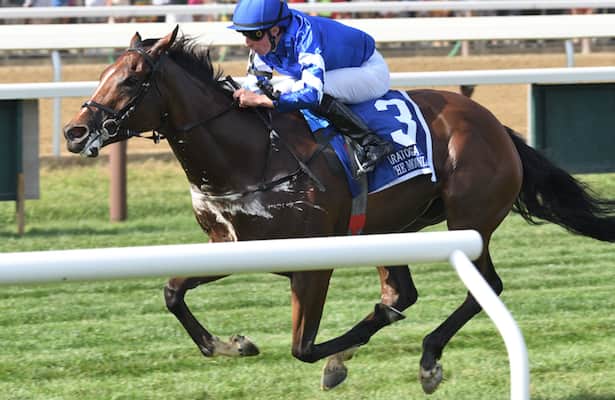 Godolphin homebred With The Moonlight will look to build on a strong win in the Saratoga Oaks Invitational (G3) as she returns just 13 days later in the Grade 2, $200,000 Lake Placid, a 1 1/16-mile inner turf test for sophomore fillies.

Trained by Charlie Appleby, With The Moonlight scored the first graded win of her career when pouncing from 1 1/2 lengths off the pace set by Contemporary Art and securing a 1 3/4-length victory over McKulick, who had previously bested her in the Belmont Oaks Invitational (G1) in July at Belmont Park.

“We couldn’t be happier with her,” said Chris Connett, traveling assistant to Appleby. “She’s doing well and eating up and giving us all the signs you want to see – positive vibes.”

The Lake Placid will mark the third American start for the daughter of Frankel, a venture that comes on the heels of a strong European campaign to start her career. Last year, she scored a maiden victory at second asking in August at Chelmsford and followed with an allowance coup at Wolverhampton. This year, With The Moonlight was an open-lengths winner of the Pretty Polly in May at Newmarket one start before an uncharacteristic 11th in the Epsom Oaks (G1) in June, her last outing before coming stateside for the Belmont Oaks.

With The Moonlight now will cut back by a furlong from the Saratoga Oaks and by 1 1/2 furlongs from the Belmont Oaks, something Connett said will be to her benefit.

“The run at Belmont was really as far as she wants to go, so coming back in trip is really not a bad thing for her,” said Connett. “She shows plenty of pace and travels really strongly in her races. We’re very pleased with her.”

Although the 13-day turnaround will be With The Moonlight’s shortest rest between starts, she has experience racing with short spacing, breaking her maiden at Chelmsford 18 days after a debut fourth in allowance company at Newmarket last summer.

Connett said he expects the quick turnaround to give the filly no problem.

“Back in Europe, it wouldn’t be uncommon for that to happen,” Connett said. “She’s come out of her run really well and we couldn’t be happier with her.”

Connett added that With The Moonlight has blossomed physically since beginning her American campaign.

“Physically, she’s done wonders. She’s always been a tall filly, but kind of on the leaner side,” Connett said. “Since she’s been here in America, she’s done really well. She’s grown and filled out. Even from her last run, she looks phenomenal.”

With The Moonlight will exit the inside post in rein to Luis Saez, who takes over riding duties from William Buick.

Four-time Eclipse Award-winning trainer Chad Brown has four chances to secure a fourth win in this event as he sends out Consumer Spending, Dolce Zel, Eminent Victor and Haughty.

Domestic Spending was last seen finishing third behind With The Moonlight and stablemate McKulick in the Belmont Oaks, making up ground late under Manny Franco to be bested just 1 3/4 lengths. Earlier this year, she won the Wonder Again (G2) over yielding turf at Belmont and the Memories of Silver at Aqueduct Racetrack.

Dolce Zel was a last-out winner of the Lake George (G3) on July 22 at the Spa, winning a dramatic photo over stablemate and returning rival Eminent Victor in the one-mile test over firm going. It was the second graded win for the daughter of Zelzal, who captured the Florida Oaks (G3) in March at Tampa Bay Downs in her first stateside outing. She followed with placings in the Appalachian (G2) at Keeneland and Edgewood (G3) at Churchill Downs.

Irad Ortiz Jr., the rider in each of her four American starts, has the call again from post 5.

Lightly raced Eminent Victor looks to make the grade after her tough loss in the Lake George. A daughter of Mr. Z, Eminent Victor became her sire’s first stakes winner when she won the Wild Applause on June 25 at Belmont by a half-length. The effort ended a nine-month respite that came after a solid third-place effort in the Natalma (G1) in September at Woodbine.

Eminent Victor will exit post 3 with Flavien Prat in the irons.

Haughty will also be making her first start since the Belmont Oaks, where she finished ninth after tracking in third and tiring under Flavien Prat. The Empire Maker bay was a close third in the Breeders’ Cup Juvenile Fillies Turf in November at Del Mar before returning with authority to post a 4 3/4-length score in the Penn Oaks six months later at Penn National.

Trainer Christophe Clement will hope to see Canisy relish a cutback by a half-furlong after grinding out a gutsy win last out in a nine-furlong first-level allowance on July 14 at the Spa. Canisy was a winner at first asking on May 1 at Belmont Park and followed with a close runner-up finish to Spirit and Glory in a June 16 allowance at Belmont.

Clement’s assistant, Miguel Clement, said that turning back in distance slightly should be fine for the daughter of Point of Entry.

“She’s doing very well,” Clement said. “She’s lightly raced and improving all the time. She pleases us with every run. I think she has a lot of ability and I don’t think the distance will be an issue for her. She’s quite versatile in the mornings and she should be able to run wit them in the afternoon.”

Canisy will emerge from post 7 with Hall of Fame rider Javier Castellano aboard.