Another defendant in Servis and Navarro case will plead guilty 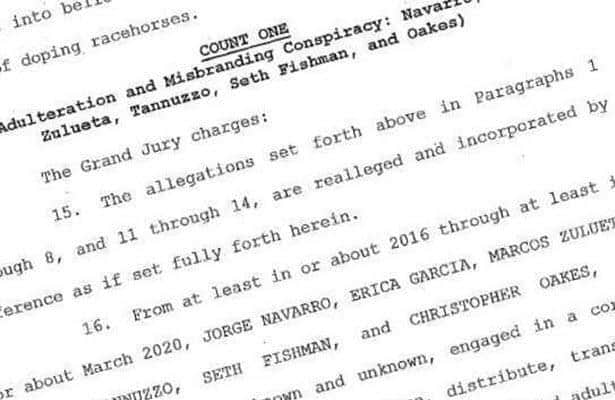 Harness trainer Chris Oakes, named in the same indictment as Jason Servis and Jorge Navarro, will change his plea to guilty in the federal drug case, according to court documents filed in New York Southern District Court and obtained by Horse Racing Nation.

Oakes will join a host of others in the case who have pleaded guilty, including Navarro. The news was first reported by BloodHorse

According to the superseding indictment in the case, filed in November, Oakes “assisted Navarro by obtaining, shipping and administering misbranded and adulterated PEDs for Navarro’s benefit.”

Oakes was charged in the indictment with one count of drug adulteration and misbranding conspiracy. He is alleged to have been instructed by Navarro to visit XY Jet, who died in January 2020, to administer illegal “blocker” PEDs to the horse and to lie to racing officials if needed.

“Drive through,” Navarro allegedly told Oakes. “If anything, if they stop you. You are an owner and you come to Navarro’s barn”

The indictment also claimed Oakes invented and made his own PED, known as a “drench,” which was supposed to be undetectable in drug tests. Oakes allegedly provided the drug to Navarro.

Oakes was caught with various adulterated and mislabeled PEDs in his barn in March 2019.

The hearing will be held next Wednesday. Another defendant in the case, Marcos Zulueta, is expected to change his plea to guilty on Wednesday in another hearing before judge Mary Kay Vyskocil.

Navarro faces up to five years in prison for his part in the operation. Servis has maintained his not guilty plea.