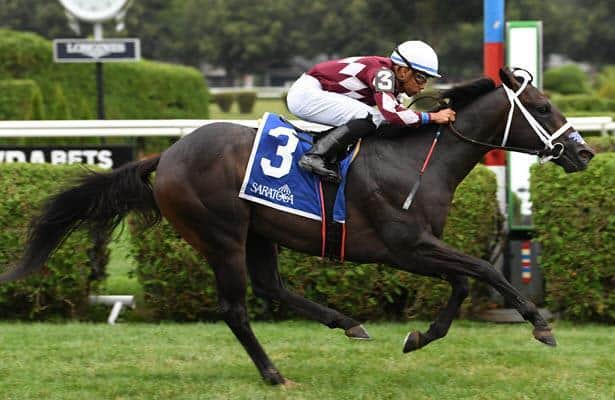 Leonard Green and Jonathan Green's Another Miracle took to the turf in impressive fashion, winning both his grass and stakes debut when overtaking 4-5 favorite Montauk Daddy in deep stretch and drawing away from Proven Strategies to win the $100,000 Skidmore for juveniles on Friday at Saratoga Race Course.

Another Miracle, from the first crop of Triple Crown winner American Pharoah, was forwardly placed by jockey Manny Franco, sitting in second position as Montauk Daddy, under Jose Lezcano, led the eight-horse field through the opening quarter-mile in 21.82 seconds and holding that edge into the stretch, registering a half-mile in 44.05 as rain started to pelt the Mellon turf still listed as firm.

Straightened for home, Another Miracle closed the separation and surged in the final furlong under Franco's left-handed encouragement, taking the lead from the outside and closing a 1 ¾-length winner. He stopped the clock in 1:01.61 for the 5 ½-furlong sprint.

"My horse broke good like always. Once I saw Lezcano's horse [Montauk Daddy] wanted to go, I just let him go," Franco said. "I knew I had horse all the way around. I just waited for the right moment to move, and that's what I did. He's talented. He can run on both surfaces."

Another Miracle, trained by Gary Contessa, ran second in his debut on July 4 on Belmont Park's main track and broke his maiden next out on July 21 at the Spa in a race taken off the turf. His turf bow in the Skidmore continued a trend of grass contenders from American Pharoah, the 2015 Triple Crown winner, who has already produced talented turf runners in Europe, including Group 3-winner Maven in England.

"He's little, but he's got a big heart in that little body," Contessa said. "It probably takes up the most space in his body. He's just a neat horse. It was very professional for him to let [Montauk Daddy] go and then come back and get him."

Off at 5-2, Another Miracle returned $7.10 on a $2 win wager and nearly doubled his career bankroll to $120,500. Contessa said the $200,000 Indian Summer on October 6 at Keeneland could be a potential landing spot as he looks to target "Win and You're In" qualifiers for the Grade 1 Breeders' Cup Juvenile Turf Sprint in November at Santa Anita Park.

Proven Strategies is also owned by Leonard Green in partnership with Aron Yagoda and Empire Racing Club, a non-profit organization whose purpose is to introduce fans to racehorse ownership. Established by the New York Thoroughbred Horseman's Association, the Empire Racing Club provides members with racing and horse ownership experience with an all-in cost of $500 for the term.

"We had a good trip. He's still a little green; still learning," Gaffalione said. "That was a big race and a huge effort from him. He's going to keep improving. Once we got it all together, he was finishing nicely and he galloped out well. I'm looking forward to him moving on down the road."
Memorable, Now Is, Venerate, Frosted Rose and River Hawk completed the order of finish.
Live racing will resume Saturday with an 11-race card highlighted by the Grade 1, $600,000 Alabama presented by NYRA Bets for 3-year-old fillies in Race 10 and the Grade 2, $200,000 Lake Placid for 3-year-old fillies in Race 9. First post time is scheduled for 1 p.m. Eastern.
Another Miracle Skidmore Skidmore (2019)