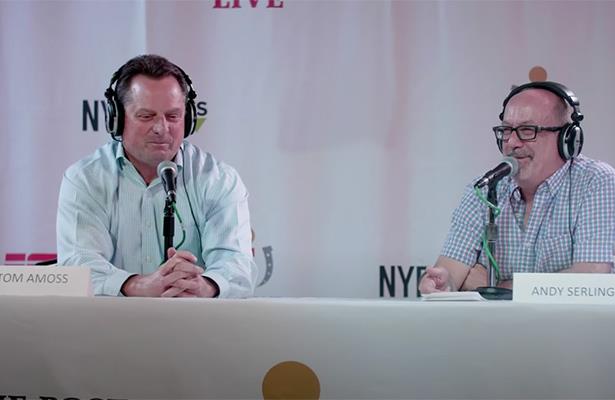 Television has been built for decades on snarky rivalries. The Dunphy sisters. The Harper brothers. And in racing, Andy and Tom.

In their case, though, handicapper Andy Serling and trainer Tom Amoss are not reading from a script on “Saratoga Live,” the New York Racing Association’s daily presentation of the races on FS1 or FS2 and regional channels that include MSG. An even bigger audience will see for itself Saturday, when the $1 million Travers Stakes (G1) will be showcased on Fox and its 227 local TV stations nationwide.

New viewers will learn what NYRA TV regulars already know. Serling and Amoss have opinions that are strong. And disagreements that are real.

“The other night we were sitting down somewhere having dinner,” Amoss said in a phone call from Saratoga Springs. “I got a number of odd stares as people walked by the table. I had to make it clear the next day on the show that I was just recouping a bet that Andy had lost. It wasn’t like I was going to eat with my pal.”

Oh, yes. The bite is always there. And so is the respect. It is strong. And it is mutual.

“Tom and I agree on a lot of things, and we disagree about some other things,” Serling said. “One of the first times we were on the air together, Tom was teasing me about something and giving me a hard time. Then when the camera was turned off, he turned to me and said, ‘I hope you’re OK with that.’ And I said, ‘Of course I am.’ He’s such a good guy.”

Both these 58-year-old men are racetrack lifers. Calling Louisiana his home since birth, Amoss has trained more than 3,700 winners from nearly 15,000 starts with earnings of more than $105 million over the past 33 years. Born a morning breeze from Saratoga, Serling was  stock trader before NYRA hired him 12 years ago to handicap, analyze and opine on TV.

Executive producer Tony Allevato decided four years ago to bring Amoss aboard, establishing part of the foundation for the battalion of talent that he has brought together.

“If you look at what we did, it’s almost like it’s starting an expansion team,” Allevato said this spring. “We created these shows from scratch. The people had to come from somewhere. They came from all these different places.”

In the case of Amoss and Serling (alphabetically, please), little did Allevato know that he was moving Felix Unger in with Oscar Madison.

“Tony took myself and Andy to dinner,” Amoss said. “Before that I had never met Andy except to say hello. I forgot what I ordered, but Andy ordered the same thing. About halfway through the dinner I was all done with my meal. He was still eating his, and he told me without even knowing me very well, ‘You eat too fast.’

“I said, ‘Andy, I’ve got five brothers. At my house you learn to eat fast.’ I remember leaving dinner walking home and wondering, ‘What kind of a person says that to somebody they don’t know?’ I think it’s gone from there.”

Serling said that the mealtime zingers actually began years before that.

“The first time I actually met Tom he was training horses for a friend of mine,” Serling said in his telephone conversation Thursday. “My friend and I were having lunch, and Tom was running a horse at Belmont that day. So he stopped by and said hi. I started teasing him about his horse. I didn’t even know him at all, and he turned to me and said, ‘Now I know why so many people hate you.’”

Serling remembered that story with a big laugh – and the realization that the seeds of their friendly but very real rivalry were planted.

“I think they’re full of it,” said Jonathon Kinchen, the professional horseplayer who became a first-hand witness to the byplay when he joined the “Saratoga Live” team last year. “They like each other. They just like to play it off.”

Kinchen, 38, looks at Serling as a throwback to old-school bettors. Instead of wagering quietly at home, they would be near the rail or the betting window airing out their passionate debates with one another.

“At its rawest form that’s why our game works,” Kinchen said. “You think this, I think this, and we can bet on it. I think Andy loves that aspect of the game, and I think he just likes to have conversations.”

Amoss certainly brings a bit of that since, unlike many of his peers, he is not shy about going public with his opinions as a bettor. As much as he looks comfortable in the role of an informed horseplayer or expert TV analyst, though, he would not give up his day job for either of those.

“Training is far and away what I want to do,” said Amoss, who limits his TV work to Fridays, Saturdays and Sundays. “The other two don’t interest me from a full-time standpoint. Training does. I love training horses.”

One of them, Serengeti Empress, challenges Bellafina on Saturday in the Ballerina (G1) sprint on the Travers undercard. So Amoss will take off his microphone and detour from his TV chair to saddle Joel Politi’s millionaire filly.

“I am disappointed with drawing the rail,” he said. “But I said the exact same thing when I drew the extreme outside (before winning the 2019) Kentucky Oaks. Hopefully I’m wrong again.”

Otherwise when Amoss or Serling is wrong, there is likely to be a side bet in play.

“Sometimes it’s on the air and sometimes off,” Amoss said. “But now that we’re working on different desks, it’s not as if I can yell at him if I want to make a bet. Now we have to make them all on the air. He made me look like a chump the other day, but that’s all right. I plan to get even.”

And when he does, viewers will be reminded of it.

“It’s been a good relationship,” Serling said. “Now we’re very good friends. But we like to give each other a hard time.”