Anatomy of a bargain: Finding hidden gems at Keeneland sale 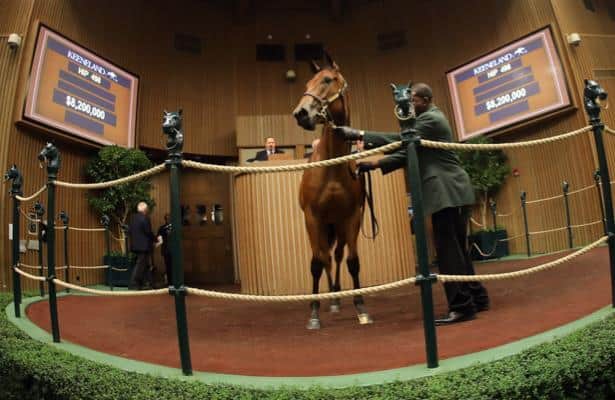 It was pouring rain Wednesday morning on the first day of the Keeneland September yearling sale’s fifth and final book. As the horses paraded in front of prospective customers in the barn area, their footprints in the gray dirt and gravel quickly filled with water.

Prospective buyer Bruno De Julio, with plastic bags inside his sneakers to try to keep his feet dry, was roaming the backstretch with a single mission in mind.

Book 5 is home to something less than the cream of the crop. Traditionally horses that are late in the sale can be had at great value, but finding the best ones can be difficult.

Consignor James Keogh, who operates Grovendale farm in Versailles, Ky., spoke of the importance of knowing his clientele on day 5, when the buyers are looking for different qualities.

“The further you go back here, it’s less involved in pedigrees and more involved in physical (conformation),” Keogh said. “Early on it’s very, very much pedigree-driven.”

De Julio agreed with Keogh’s assessment, saying that even in the later books, buyers can get carried away by a pedigree, leading them to ignore soundness and conformation when considering the horse.

“That catalog page is like crack cocaine,” De Julio said. “And they have the money, so they’ll look at a horse and go, ‘Yeah, it looks fantastic.’ There’s a lot of conscientious guys who buy those horses, and my point is that they’re overspending, and a lot of times that catalog page can lie to them about what they’re getting.”

On the first day of the book, De Julio was having trouble finding even one that met his standard. As he toured the stock, nearly every horse had something he could not get past.

As he watched the horses walk, first from the side view, then from behind and straight ahead, he softly described the various issues what he was seeing.

“Short neck, the body doesn’t match the front half of the body.

“Not athletic at all.

“The right hind clips the left hind when he walks. That horse will never make a good racehorse.”

“Why are all of these so long? It’s like they put every wiener dog in book 5.”

Rudy Delguidice of Excel Bloodstock also was making the rounds at Keeneland, often confirming or disagreeing with De Julio’s assessment of the available horses.

Delguidice said that late in the sale, the need to inspect and confirm horses as opposed to obsessing over the pedigree sheet is paramount. He said it takes an educated eye because of the cleverness of the blacksmiths at the sale.

While book 5 attracts some of the top names in horse racing looking for bargains, it also serves as an opportunity for smaller trainers and owners to add to their barns. Bargains can be found, but buyers have to know what they are looking at, making strong horsemanship as or more important than earlier in the sale.

“(Anyone) could come up with those big-ticket horses,” De Julio said. “It’s not that hard to go in and find the best looking horse at the sale.”

Keogh agreed with De Julio on that point, noting that even at the back of the sale, great horses can be found if a horseman is diligent.

“You’ve got to be a little more open-minded. These are rougher-cut diamonds,” Keogh said. “But one has to bear in mind that both Big Brown and I’ll Have Another were both catalogued back here in Book 5.”

De Julio and Delguidice, sometimes together, sometimes separately, were among the hordes of buyers going from barn to barn, filling out cards to indicate the horses they would like to see.

De Julio explained his strategy for which prospects he would take a look at.

“A lot of the time I may like three horses, and I’ll just pull everything,” he said. “You never know what you might find, and you don’t really want to tip your hand.”

Delguidice agreed on keeping things close to the vest, discussing his unwillingness to talk pricing with the consignors.

“You play games, because if you ask, they know you committed,” Delguidice said. “If I never ask, they never know where I’m at.”

After closely inspecting each horse, De Julio noted on his card which hip numbers he was further interested in. He then walked back to the barn to inspect a binder full of veterinarian reports, which often confirmed things he suspected while watching the horses walk.

If he was further interested, he placed a call to his own vet. Often the resulting news was not good.

That did not bother De Julio, who said the vet report is key to his process.

“If something tells you this is going to be very hard to get to the races, you've got to back off,” De Julio said. “I don’t use a vet to tell me no. I use a vet to make an informed decision.”

The 2021 edition of the sale was affected by an extreme bull market for horses. Average and median price were both at record highs, and the flood of money, especially early in the sale, led to later horses going for higher prices as well.

The high prices, which result in part from agents incentivized to buy big, has had an impact on the smaller barns – both trainers and owners – that have struggled to get horses.

“The smaller guys have to go do it themselves,” De Julio said. “They can’t rely on agents to do it for them. And a lot of times if it’s a good horse, the agent isn’t going to give it them. They’re going to give it to the bigger guy.”

Nothing clicked for De Julio on the first day of the book. One of Keogh’s available horses that the prospective buyer had liked went for more than he wanted to pay.

Eventually though, De Julio ended up making three purchases in book 5, including a Dialed In filly he was particularly excited about.

“We just kind of stumbled on to her. Rudy found her and I went to look,” De Julio said. “She looks like a rocket ship.”