By the numbers: Ranking the fastest Preakness contenders 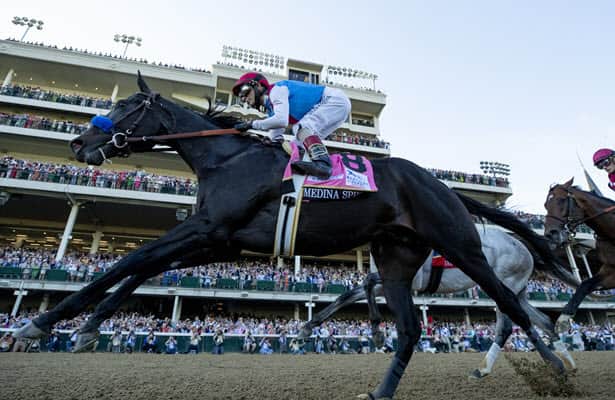 When Medina Spirit and three other horses crossed the finish line only 1 1/4 lengths apart in the Kentucky Derby, it appeared a competitive Preakness Stakes would be in the works.

It took less than a week for those dreams to fizzle when the second- through fourth-place finishers, Mandaloun, Hot Rod Charlie and Essential Quality all were withdrawn from consideration.

Interestingly enough, the biggest competition for the Kentucky Derby winner could come from stablemate Concert Tour.

Medina Spirit does not possess the sheer brilliance that Bob Baffert's other recent Kentucky Derby winners have, but he has shown a ton of grit and fight. He has proven to be extremely hard to pass on the lead but has not been quite as effective while tracking another runner.

Concert Tour appears to be a horse that strictly needs the lead to be at his best. His debut score and his win in the Rebel (G2) were sparkling. He was able to make the front in both of those efforts. He was all out to beat Freedom Fighter in what should have been a walkover in the San Vicente (G2) and had nothing to offer late in the Arkansas Derby (G1). He did not make the early lead in either of those races.

Steve Asmussen's Midnight Bourbon also is likely to apply pressure and surely will be ridden more aggressively in the Preakness than he was in the Kentucky Derby.

Although the discussion of who will set the early pace could go multiple ways, Medina Spirit is the clear leader of this field in terms of speed figures.

He earned an 102 Beyer Speed Figure, 101 Brisnet Speed Ranking and 122 TimeformUS Figure for his victory in the Kentucky Derby.

His last five TimeformUS Figures are higher than the career high of anyone else in the field.

As dominant as Medina Spirit appears on figures, he will offer no value. So it is worthwhile to search for possible alternatives in case the favorite is not able to replicate his big effort two weeks later.

Chad Brown's Crowded Trade disappointed in the Wood Memorial when running third, but his second-place finish in the Gotham makes him a favorite of speed figure handicappers.

The 104 Brisnet Ranking he earned puts him 3 points ahead of Medina Spirit's career best number. TimeFormUS and Beyer Speed Figures do not rank him quite as highly, but his 95 and 113 numbers, respectively, still are among the best in the field.

Midnight Bourbon's career best 96 Beyer Speed Figure is the second highest in the field. He has shown great consistency this year and could sit a cozy trip.

TimeformUS favors Concert Tour as the top alternative to Medina Spirit as the 116 figure he earned in the Rebel makes him competitive with his stablemate. If Concert Tour is able to wrangle away the lead, he might never give it up.

While this year's Preakness field is not very deep, it offers three viable alternatives for those trying to beat the heavy favorite based on speed figures.

Below we take a closer look at the career high Beyer Speed Figures, Brisnet Rankings and TimeformUS Figures for each runner in the second jewel of the Triple Crown.

Barn Tour: Could one of these 9 be Barclay Tagg's next star?
Check out Barn Tours on Horse Racing Nation R ober...