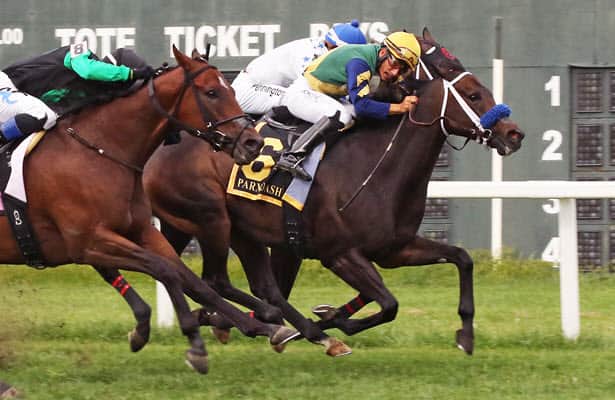 Chasing the pace early and trading the lead with rivals in the homestretch, heavy betting favorite The Critical Way (1-5) got his head down first at the wire and won by a nose Tuesday in the Grade 3, $200,000 Parx Dash Stakes, a five-furlong turf sprint at Parx Racing.

Owned by Monster Racing and trained by José Delgado, the 7-year-old Tizway gelding ran his winning streak to three races, all stakes and all with Paco López riding.

Battle Station (9-1), a 6-year-old gelding that was claimed this summer at Saratoga and sent from trainer Rob Atras to the barn of Danny Velázquez, finished second. Francatelli (7-2), a 4-year-old gelding, set the early pace and was a head behind in third. He was two lengths clear of fourth-place So Street (15-1), another 4-year-old gelding who has lost his last 14 starts.

The winning time on the firm turf was 58.55 seconds off early fractions of 23.03 and 46.44 seconds. There were seven starters left after four scratches from the primary field.

The Parx Dash was originally scheduled for last Tuesday but was postponed because of wet weather in Bensalem, Pa. The $200,000 Parx Dash (G3) serves as the prep for the $300,000 Turf Monster (G3), to be run on Saturday, Sept. 25 at Parx Racing.