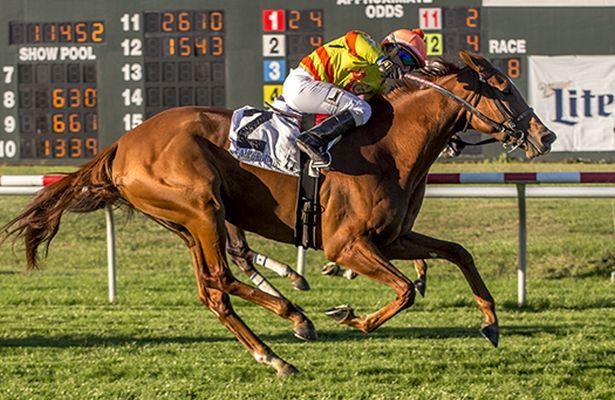 Rain or shine, turf or dirt, when it comes to Saturday’s track condition, trainer Gary Scherer is just fine either way.

Stakes entries Twoko Baby (Woodchopper) and Remember Daisy (Pago Hop) are slated to perform on the Stall-Wilson Turf Course, but if Mother Nature fails to cooperate and the races are forced to the main track, the connections remain confident in their chances to run well.

A two-time stakes winner already this Fair Grounds meet, Al and Bill Ulwelling’s Remember Daisy has also won two stakes over a sloppy main track which took place in the last out Louisiana Champions Day Ladies Stakes which she won by eight lengths. In February, she won the Louisiana-Bred Premier Night Starlet Stakes at Delta Downs which also was contested over a sloppy going.

“I’m sure coming off the turf could give her a better chance but obviously she’ll run both ways,” Scherer said. “We’ll see how it sets up and see who scratches.”

The Pago Hop Stakes will be the 3-year-old daughter of Misremembered’s first stakes start against open company. She is a four-time stakes winner against follow Louisiana-breds. Jockey Mitchell Murrill will ride Remember Daisy who breaks from post 11 at 9-2 morning line odds.

Like his stable mate, Winchester Place Thoroughbreds’ Twoko Bay also has winning experience over both surfaces. The Minnesota-bred 3-year-old son of Neko Bay broke his maiden at first asking over a sloppy going at Canterbury Park. Three starts later, Twoko Bay defeated state-breds once more over the turf at the Shakopee oval.

Last time out however, he was a troubled fifth over the Stall-Wilson Turf Course when facing open company for the first time.

“All systems are go for him,” Scherer said. “He’s ready to run a big race. He’s another one that will run either way. He’s been training well. The first race he ran here off the layoff wasn’t as bad as it looked. It looks like he ran fifth by seven (lengths) but he got trapped on the rail, had to wait and then move out to the four path before he could really start running.”

Twoko Bay will be guided by jockey Jose Valdivia, Jr. and will break from the seven hole at 20-1 odds.