Amoss to test exciting state-bred No Parole on 'national level' 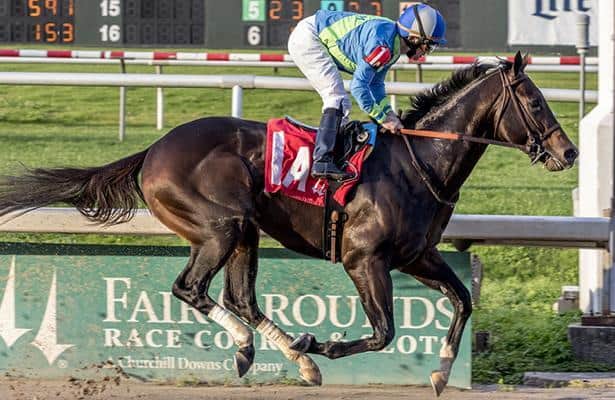 No Parole, trainer Tom Amoss’ budding star Louisiana-bred colt, will be pointed to a two-turn race against open company after another exceptional showing Saturday.

The Violence colt, who won his 3/4-mile debut on Dec. 15 by 14 1/4 lengths, stepped up to allowance company going the same distance, this time winning by 13 1/4 lengths at Fair Grounds.

No Parole quickly cleared his rivals from the gate and kept going after an opening quarter mile in 21.79 seconds. He finished up in 1:10.24 over a muddy, sealed track that may have slowed down less talented rivals.

“He’s a deceptive horse because he’s so gifted athletically,” Amoss said. “He has the ability to float across the ground. If you watch his races, you can see it. That’s one good-looking stride he has. If you’re that mechanically efficient, and he is — I don’t want to sound technical. It’s a pretty thing to see.

“Sometimes, how fast you’re going is not as important as how easily you’re doing it.”

Amoss wasn’t immediately sure where he’d try No Parole next, except to say the Maggi Moss-owned 3-year-old will get a chance to go long, and not against only state-breds.

“The whole idea of where we go from here is, are we competitive on the national level as well?” the trainer said.

A $75,000 yearling purchase, No Parole is out of the Bluegrass Cat mare Plus One. He’s the third foal to race from the dam, whose first runner by the same sire, Violent Ways, won three of six starts in Louisiana. Her second foal by Songandaprayer remains a maiden.

“His pedigree doesn’t shout two turns, but it’s hard to resist the urge to at least try it this time of year and see how it goes,” Amoss said. “I think it’s safe to say our next race will be around two turns. If you’re a young horse and you’ve already won two races, there really aren’t any allowance races for you. Those conditions don’t exist.”

“He’s always showed me he’s a really good horse, but there’s a big difference in beating maidens and stepping up and beating winners,” Amoss said. “The fact that he did it today pretty effortlessly is extremely encouraging and has us excited.”