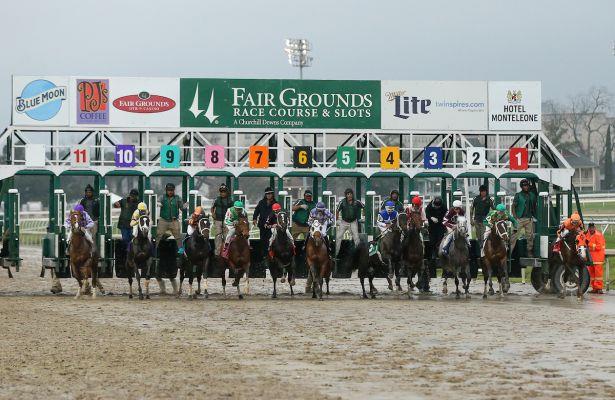 Photo: Steve Dalmado/Eclipse Sportswire
One of the more impressive winners from the current sophomore class this season, Shareholder Value continues to work well toward his next start for 11-time meet-leading conditioner Tom Amoss and owners Klaravich Stables and Bill Lawrence. A good-looking son of Uncle Mo, Shareholder Value flashed impressive acceleration in both his starts this meet, including an allowance tally over well-regarded Society Beau in December and then a wide, late-charging fifth in the Grade III $200,000 Lecomte Stakes on Jan. 21, beaten only 2¼ lengths and a half-length for third.
On Saturday, the $190,000 Keeneland September 2015 purchase worked a sharp half-mile in 48 flat, pleasing his connections.
“It was one of his best works,” Amoss said. “He went really well. As of this point, I’m going to look at the noms for the (Grade II $400,000) Risen Star (on Feb. 25) and go from there. We haven’t made a decision yet with him, but it’s very much on the radar.”
Shareholder Value’s time was the sixth-best of 97 moves and was a a full two seconds faster than his previous drill one week prior at the same distance. He has a pair of victories from six starts and has faced salty competition. In addition to Guest Suite and Untrapped, the first two finishers in the Lecomte, he was sixth behind McCraken in the Grade II Kentucky Jockey Club at Churchill Downs three back.
SUMMERTIME SKY REROUTES; VALADORNA, TAKEOFF WORK FOR CASSE
John C. Oxley’s Summertime Sky, who may have dodged a bullet when she scratched from the $50,000 Joseph E. ‘Spanky’ Broussard Memorial on Saturday morning — an event in which Stallion Heiress manhandled her foes by nearly eight lengths — has rerouted to an allowance race next week. The Mark Casse trainee is entered for next Sunday, Feb. 19, in a two-turn main track event. The daughter of Sky Mesa exits a respectable fourth in Farrell’s Listed $150,000 Silverbulletday Stakes and worked toward her third career start on Saturday morning with a five-furlong move in 1:01.40.
“We decided to go to the ‘A-other-than’ on the dirt next week because of timing,” said David Carroll, assistant to Casse. “This race is on the dirt and we feel like she didn’t run a bad race in her only dirt try. She may likely be turf down the road, but we wanted the extra week.
“She worked this morning and worked fine,” Carroll continued. “It’s a good time to experiment.”
Summertime Sky will have to take on likely favorite Jenda’s Agenda, who romped on debut last month for breeder-owner-trainer Larry Jones and recent 50-percent buy-in Fox Hill Farm.
Also on the tab for Casse Saturday morning was barn favorite Valadorna, who worked a sharp five furlongs in 1:01 flat for Stonestreet Stables.
“It was just a maintenance work,” Carroll said. “We are really happy with her and her energy level. She’s never one to blow you away in the morning, but she went well today.”
Casse’s Grade II $400,000 Risen Star Stakes candidate Takeoff worked five furlongs, as well, in 1:00.20, good for fifth-best of 53 moves. The son of Arch was third last out in the Grade III $200,000 Lecomte Stakes.
JENDA’S AGENDA ZIPS IN WORK, TOPS TAB
Jenda’s Agenda, one of the serious buzz horses this season who amplified such into a roar when romping on debut for breeder-owner-trainer Larry Jones, zipped through a bullet five furlongs on Sunday morning in 59.80. The daughter of multiple graded stakes-winning mare Just Jenda is set to take on Summertime Sky next weekend in her two-turn debut in allowance company.
Donegal Racing’s Arklow, a high-profile maiden aiming toward the Grade II $400,000 Risen Star Stakes, worked five furlongs Saturday in 1:01 flat for trainer Brad Cox. The rangy son of Arch was fourth, beaten less than two lengths, last out in the Grade III $200,000 Lecomte Stakes on Jan. 21.
Brad Grady’s promising sophomore Cool Arrow, winner last out of the $250,000 Springboard Mile at Remington Park for trainer Joe Sharp, worked five furlongs in 1:01.60.
Brittlyn Stables’ Forevamo worked a half-mile in 49.20 for trainer Al Stall, Jr. The good-looking son of Uncle Mo is aiming toward his 4-year-old bow.
Abdullah Saeed Almaddah’s Green Mask, winner last out of the $75,000 Bonapaw Stakes, worked a smart half-mile in 47.20 for leading conditioner Brad Cox, who also sent out Richard Klein and Bertram Klein’s track record-setting turf filly Believe in Bertie to go five furlongs in 59.80.
Undefeated turf sprinter Equation worked a half-mile in 50.60 for trainer Brendan Walsh and owner Ben McElroy. The daughter of In Summation was a half-length winner of the $50,000 Big Easy Stakes on Jan. 28 and is now 4-for-4.
Louisiana Stakes winner Hawaakom worked five furlongs in an easy 1:05 flat for trainer and part-owner Wes Hawley. He is considered possible for the Grade III Mineshaft Handicap on Feb. 25.

Clark Brewster’s talented, hard-knocking graded stakes-winning stayer Neck ’n Neck, who was recently purchased by Brewster at auction for $50,000, worked five furlongs in 1:03 flat for trainer Steve Asmussen. The son of Flower Alley is unraced since an eighth-place finish in the Grade II Brooklyn Stakes at Belmont Park on June 11 behind subsequent Grade I winner and Pegasus Invitational World Cup runner-up Shaman Ghost. Said off-the-board finish was only his second in his previous nine starts — all for previous trainer Ian Wilkes.