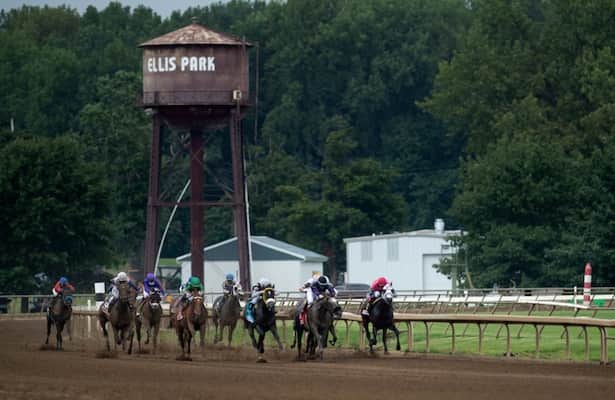 The Indiana Derby (G3) had a heavy favorite in Churchill Downs’ Matt Winn winner Fulsome. But the time-honored racing tenet is that you don’t run away from one horse. Indeed, Sermononthemount finished second at 18-1 as Mr. Wireless rolled to victory in the 1 1/16-mile stakes. Fulsome finished a non-threatening third.

The 1 1/8-mile Ellis Park Derby would not appear to have a prohibitive favorite in its field of six 3-year-olds. While Super Stock won the Arkansas Derby (G1), he also finished fourth in the Texas Derby and Iowa Derby following a 16th in the Kentucky Derby. Also entered: Indiana Derby fourth-place finisher Starrininmydreams, Ellis Park allowance winner Colonel Bowman, allowance runner-up (by a nose) There Goes Harvard and Ellis maiden-winner Hanks.

“He’s a horse that wants some pace up front and be allowed to finish. And we really didn’t get that in the Indiana Derby,” Amoss said. “He’s also a horse, in my opinion, that rather come around than go inside. He kind of likes to have one of those trips where he’s not crowded in any shape or form, and he didn’t get that either. But he still ran well. The Ellis Park Derby is a logical race for us because No. 1, it’s right there. It’s very attractive purse-wise, and I like the distance.”

The Indiana Derby “was a race on paper that I thought was worth rolling the dice,” he said. “I think that’s kind of what’s happening again… I see a field in the Ellis Park Derby with a lot of horses that are up and coming and improving, but certainly no horse in there that would scare another one out.”

James Graham has the return mount on Sermononthemount. Graham turned out to be prescient when he said this before the Indiana Derby: “He tries his butt off every time, so you have to take a little bit of a shot — and he’s doing good. What if Fulsome has a bad day? And hopefully we have a good day. Give it a shot and see what happens.”

“He showed he is legit by the results of the West Virginia Derby,” Amoss said. “So that’s nice, too.”

Sermononthemount didn’t run well on turf when claimed for $50,000 at the Fair Grounds in March. Two races later, Amoss put him in for a $30,000 claiming race as a confidence-builder, and off that win began tackling stakes company. The result was third in the Prairie Mile and then the Indiana second.

“The Ellis Park Derby will give him a chance to really show what he can do at more distance,” Amoss said. “He’s an improving young horse.”

The Brad Cox-trained Dreamalildreamofu, among the favorites for the $125,000 Groupie Doll at a mile, has won on dirt, turf and synthetic, including taking Turfway Park’s $100,000 Latonia for her first stakes victory. Since then she was second in Pimlico’s Allaire DuPont (G3)at 1 1/8 miles on dirt and a close third in Arlington Park’s Chicago Stakes (G3) over Polytrack at seven-eighths of a mile.

Owner Dann Glick of Louisville believes getting back to a mile, which is conducted around basically 1 1/2 turns at Ellis Park, is a benefit.

“It fits her, and her best speed figures are on the dirt,” he said. “She just seems to run better on dirt. She’s a big mare and just gets over it well. She’s so consistent, you’re thankful when you get one that nice.”

The Groupie Doll drew an overflow field of 13 fillies and mares, with Dreamalildreamofu's stablemate Matera needing a scratch in order to run.

Dreamalildreamofu, a daughter of Commissioner bought by Glick’s Full of Run Racing LLC partnership for $65,000 at a 2-year-old auction, has been worse than third only once in 10 starts, with a 4-2-3 mark. Her only poor effort came over yielding turf. Ellis also will be the eighth track over which the filly has raced. Martin Garcia was named to ride.

“She’s a good one,” Glick said. “You don’t get ’em like that who can run on every surface is try every time.”

Dreamalildreamofu tuned up for the Groupie Doll with a half-mile work in a sparkling 47.6, the fourth-fastest of 55 timed workouts at the distance Sunday morning.

“When I talked to Brad, he said she looks unbelievable,” Glick said. “Just glowing. So we’re anxious; we’re excited.”

So is Jorje Abrego, Cox’s assistant trainer who oversees the Ellis Park division. “I’m excited to see Dreamalildreamofu run,” he said. “If this filly runs the race I think she’ll run, she could be tough to beat.”

Madaket Stables bought into Dreamalildreamofu after her Turfway stakes victory. Madaket previously teamed with Glick’s Right Time Racing partnership on the Grade 1-placed Meadow Dance after that filly won her debut at Ellis Park in 2018.

“We’ve had three stakes horses in the last three years,” Glick said. “I don’t buy a lot of horses. We only buy two or three a year. So we had Meadow Dance, Dreamalildreamof you and (stakes-placed) Color of Dawn. We’re small, but we’ve had some decent success, knock on wood. I’d say (Grade 3 winner) Bouquet Booth was the best, but this filly might be better than Meadow Dance, though she was Grade 1-placed.”

Glick knows it’s rare to find a horse to handles so many surfaces, especially when one has a small stable.

“They are few and far between,” he said. “We have to feel very fortunate we’ve got one of this type, and hopefully she’ll keep going and maybe we’ll run her as a 5-year-old.”

Candy Landing won his debut at Churchill Downs impressively enough that Walsh took him to Saratoga to run in the Sanford Stakes (G3) - his only 2-year-old to run at the Spa. Candy Landing finished sixth that day as the third choice.

“He was very impressive first time out, that’s why we took him up there,” Walsh said Thursday morning at Ellis Park. “It didn’t work out good for him, though. It was a deep track early in the meet. He broke a little slow, got stuck down on the inside, and that was it pretty much. He came out of it well, and we thought we’d get him back here and give this one a go. If he gets back to his maiden form, I wouldn’t write him off.”

It was pointed out that several years ago, the Tom Amoss-trained Serengeti Empress went up to Saratoga off a maiden victory, was a non-threatening fourth, came back to Kentucky to win the Ellis Park Debutante impressively and went on to win the Kentucky Oaks, four other graded stakes and more than $2.17 million in earnings.

“Well, if he’s half as good as Serengeti Empress, I’d be happy,” Walsh said cheerfully. “He’s a nice little horse. We’ve always thought highly of him. I think that’s what it was: You know a baby, when they get stuck in a bad spot like that with no experience, it just kills them. Hopefully he can bounce back here.”

Being stuck down on the inside shouldn't be a problem this race as Candy Landing drew post 7 in a field of seven. James Graham has the return mount.

As far as Baladi and Freelancer, both owned by global-power Godolphin, Walsh said he’s not sure what’s next.

“I just had them out jogging to see how they came out” of their races, he said. “I think it’s important to do the right thing with 2-year-olds, especially when they show they have some talent like those two have. Hopefully if we can manage them correctly, they can have good careers. But they look like they have the talent right now.”

Walsh began having a division at Ellis Park in 2019, including having Grade 1 winner Maxfield training over the surface all summer before launching his career that now stands at seven wins out of nine starts and $1.45 million. He’s become a big fan of the track surface and quiet environment and has found it a good way to develop a young horse.

“I’d rather run them here rather than run into deep waters up there,” he said of Saratoga, a meet for which the big New York outfits often point their expensive 2-year-olds. “Not that you’re not (doing that) here anymore. You still are going to come up with some tough horses here. But I think it’s very tough on the horses up there. I rather if they run well here, if something ran second or third here, then maybe take them up there for a maiden race. But so far, the only 2-year-old we’ve run up there was Candy Landing.”

“Everything points toward Kentucky Downs with him,” Walsh said. “We’re delighted with him to get that done. That was the whole idea running him here. The 5 1/2 furlongs is as short as he wants. He obviously loves Kentucky Downs, as he showed last year.”