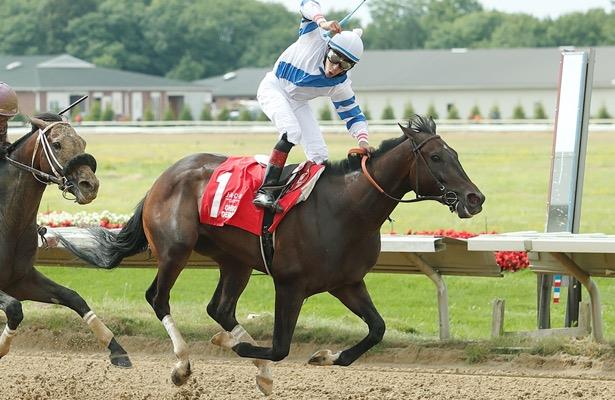 Dean Martini made his first start at Ellis Park last Aug. 4, finishing second at 24-1. Now, after winning last Saturday’s $500,000 Ohio Derby, Louisville-based Raise the BAR Racing’s 3-year-old gelding could be coming back to Henderson, Ky., for the $200,000 Ellis Park Derby on Aug. 9.

The Ohio Derby was Dean Martini’s second start for his new owners and Amoss after they claimed him out of a $50,000 maiden-claiming race at Churchill Downs, which made him a winner on his eighth attempt. Yet even in defeat, there was only one race in which Dean Martini did not run well. That was his second start, which came at Del Mar in California.

Dean Martini won by 6 3/4 lengths the day he was claimed, the only time he was in a claiming race. He returned to finish a good second after breaking from post 12 in an allowance race won by Man in the Can, a strong contender for Keeneland’s Grade 2 Toyota Blue Grass Stakes. That encouraged Amoss to go hunting bigger game in the Ohio Derby (G3), whose runner-up was stakes-winner South Bend and whose third-place finisher was 2019 Breeders’ Cup Juvenile winner and Eclipse Award champion Storm the Court.

Amoss is a disciple of the Ragozin handicapping sheets, which chart form cycles by taking into account variables such as ground lost, traffic trouble and how fast or slow the track is playing in assigning a number for each horse’s race. The lower the number, the faster the performance, regardless of what the official time might be.

“I liked the fact that he was a horse who looked like on the ‘sheets’ that he was developing,” Amoss said of the claim. “The day we claimed him, he ran a very big race. In the allowance race, he ran just as well. … I just got lucky. I didn’t do anything special with this horse. He came in great shape. I think I got him at the right time. I claimed a horse that was in the process of developing, getting better. I did nothing more than pick up where the old barn left off.”