Amoss: Roiland looking for pace to chase in Indiana Derby 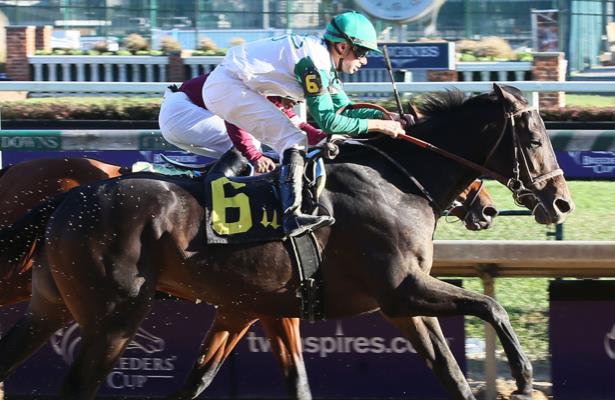 Tom Amoss — who tied for the 2018 Indiana Grand trainers title and won the crown outright in 2017 — will attempt to win the Grade 3, $500,000, Indiana Derby for the first time Saturday, sending out James and Mary Durlacher’s Roiland.

The son of Successful Appeal is a deep closer whose biggest credential is his third-place finish in the Fair Grounds’ Risen Star (G2), in which the top two finishers that day went on to win the Preakness Stakes (War of Will) and Kentucky Derby (Country House).

In the Indiana Derby they'll all be trying to beat Mr. Money, an open-lengths winner of his last two starts. The Bret Calhoun trainee should be installed as the morning line favorite at Wednesday's post position draw.

“It’s a bit of a surprise that Mr. Money is going in that spot,” Amoss said of the Indiana Derby. “For Roiland, we need a race that has a lot of speed in it. He has a big come-from-behind style. His best race to date is probably the Risen Star. That race, which is at the same distance as the Indiana Derby, has us very encouraged. But pace is important, and we’re hoping for a lot of that Saturday night.”

While Mr. Money has natural speed, Amoss cheerfully acknowledged that’s not what he had in mind as far as having a lot of pace in the Indiana Derby.

“No,” he said with a laugh about Mr. Money. “He’s a good horse. No, I’m not happy about it at all. He’s certainly the prohibitive favorite and deserves to be.”

Roiland closed to be fifth, beaten 4 3/4 lengths, in the new $300,000 Oaklawn Invitational held May 4, same day as the Kentucky Derby.

“We gave him a month off, let him be a horse out in the field and brought him back in,” Amoss said. “We’ve trained him up to this race, and we’re hoping that with a little bit of a break — his first break ever since he came to the racetrack — can make a difference when he starts his second half of the year.”

Amoss said he’s also considering entering Drinking Dixie in the Indiana Oaks (G3), with the idea of looking at the field before committing to running. Entries for that race will also be taken Wednesday.

A Delta Downs allowance winner, Drinking Dixie was second in a small stakes at Prairie Meadows in her last start. She’s owned by Gayle Benson, the New Orleans Saints and Pelicans owner whose late husband, Tom Benson, bought Dixie Brewing Co. in 2017 with the intention of bringing the iconic brand back to its New Orleans roots.

“She’s a developing 3-year-old filly,” Amoss said of Drinking Dixie. “What we’d like to see is a race that has a lot of developing fillies, rather than proven horses. Now we know the filly that won the Fair Grounds Oaks will be in the race, and she’s the favorite. But we want to see what else is in there.”