Amoss: No Kentucky Derby decision yet about Hoosier Philly 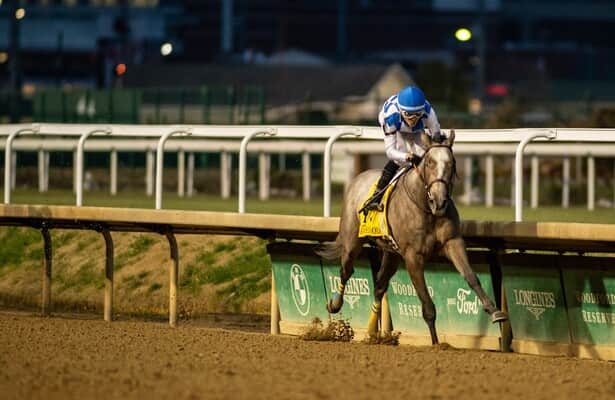 Asked to clarify his thoughts about aiming Hoosier Philly toward Kentucky Derby 2023, trainer Tom Amoss said Monday “we haven’t made any decision” about where to send the undefeated filly next spring.

“I wouldn’t do that without the owners and what she’s showing when the next year comes around,” Amoss told Horse Racing Nation in a Monday telephone conversation.

ZIPSE: Amoss opens door to a Philly in the Kentucky Derby.

Amoss raised hopes that the Into Mischief 2-year-old owned by Bill Stone and Rod Ratcliff could try to become the first filly since Devil May Care in 2010 to start in the Derby. After Hoosier Philly won Saturday’s Golden Rod Stakes (G2) to run her record to 3-for-3, Amoss told Churchill Downs TV, “She’s a filly, but I have entertained the thought of putting her on the road to the Kentucky Derby.”

Asked about 15 minutes later whether that would be his mission in 2023, Amoss told HRN, “No. I only meant that it crossed my mind. That’s all.”

Putting all this into context Monday, Amoss said his TV statement “was part of a bigger comment. It was designed to talk about how good I thought she was.”

The talking points were stoked Saturday when Hoosier Philly drew away to a five-length victory in the Golden Rod, a 1 1/16-mile Kentucky Oaks points prep that was won at a time of 1:43.94. That was 1.31 seconds faster than Instant Coffee’s victory over the same course and distance a half-hour later against rival 2-year-old colts in the Kentucky Jockey Club (G2), a points prep for the Derby.

Yet the Beyer Speed Figures from Daily Racing Form revealed Instant Coffee earned an 82 and Hoosier Philly an 81, no doubt an adjustment for the slow, early pace in the Kentucky Jockey Club.

Amoss said Hoosier Philly could have shown even more if jockey Edgar Morales had asked her for it.

“I was tempted to tell Edgar, ‘You know what? When she gets down the lane, open the reins and let her run.’ But that’s not in her best interests. There’s a lot of racing ahead. When she passed that group, and Edgar had a lot of horse, we had already made the decision that we were just going to (cruise). We weren’t going to take any chances with a horse like that.”

Morales, who also rides Hoosier Philly in daily training, said there is more to her.

“She’s just doing everything so easily,” he said Saturday. “She doesn’t even realize how fast she’s going in the mornings. It’s unbelievable. … She pulled me around in the gallop-out. I stopped her with the outriders over there, or else she would have kept on going all day. When she switched leads, and she was just waiting for company. She’s really professional in company in the mornings, so I know that she’s got a lot more in there. I never have to wait for anything, so I know she’s really good.”

While Amoss goes next to the ongoing meet at Fair Grounds in New Orleans, Hoosier Philly gets a month off at a farm in Florida before her 2023 debut, wherever it may be – and wherever it may lead.

Asked if it just was too soon to be planning for any race next May let alone the Kentucky Derby, Amoss said, “I think we’re both saying the same thing.”