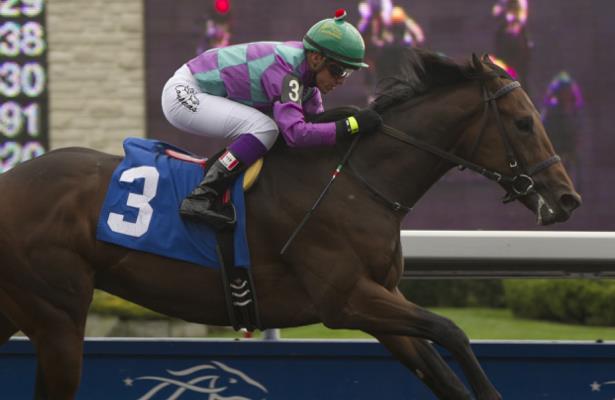 Ivan Dalos’ Ami’s Flatter, winner of the 2016 Commonwealth Stakes (G3) at Keeneland, has been retired and will stand the 2019 breeding season at Ocala Stud, the farm announced Thursday. A fee will be announced at a later date, and he is available for inspection.

“We are looking forward to working with Mr. Dalos on standing Ami’s Flatter,” said Ocala Stud’s David O’Farrell. “He is an accomplished racehorse with tremendous sprinter speed and versatility. He possesses sire power, his female family is loaded with runners of the highest quality, and he has a great physical to match.”

Bred by Dalos’ Tall Oaks Farm, one of the most successful breeding operations in Canadian history, Ami’s Flatter is by Flatter, the sire of 2017 3-year-old champion West Coast, and the millionaire Flat Out. He is produced from the Victory Gallop mare Galloping Ami, Broodmare of the Year in Canada in 2016 and a full sister to stakes winner Victorious Ami who is the dam of multiple Graded stakes winner Ami’s Mesa, champion female sprinter and older female in Canada in 2017, and Graded stakes winner Ami’s Holiday.

An earner of $536,931 for trainer Josie Carroll, Ami’s Flatter defeated a competitive and classy field in the Commonwealth, sweeping past the pacesetters into the lane and beating Graded stakes winner Ready for Rye by 2 ¾ lengths. His final time of 1:21.66 for seven furlongs earned a Beyer Speed Figure of 105 and just missed Taris’ 2014 track record of 1:21.32.

Ami’s Flatter was precocious, winning his 2-year-old career debut over Woodbine’s all-weather surface. The following season at three, he finished second to Carpe Diem in the $350,000 Tampa Bay Derby (G2) and third behind Materiality and Upstart in the $1,000,000 Florida Derby (G1). He also finished third to Grade 1 winner A.P. Indian and multiple Graded stakes winner Limousine Liberal in the Phoenix Stakes (G3) at Keeneland.

For more information about Ami’s Flatter, or to set up an inspection, please contact David or Joe O’Farrell at (352) 237-2171 or visit www.OcalaStud.com.