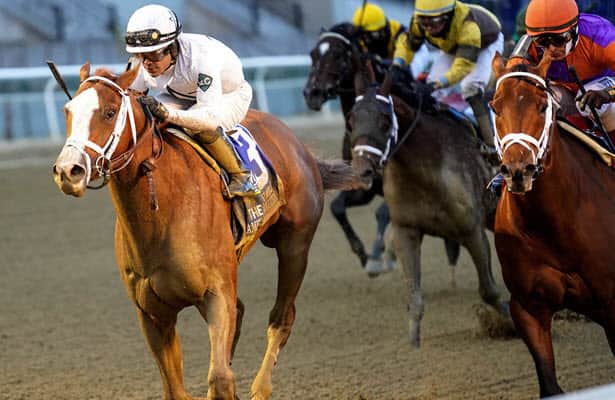 On what was an eventful day for trainer Todd Pletcher, the Hall of Famer survived an inquiry in three straight stakes races on Saturday when Americanrevolution collared stablemate Following Sea to secure victory in the 32nd running of the Grade 1, $750,000 Cigar Mile at Aqueduct Racetrack.

Americanrevolution, owned by WinStar Farm and CHC Inc., arrived at the one-turn mile handicap for 3-year-olds and upward from an open-length victory against fellow New York-breds in the nine-furlong Empire Classic on October 30 at Belmont Park.

The son of leading third crop sire Constitution earned his first graded stakes victory while making his first start against Grade 1 company since finishing third in the Pennsylvania Derby at Parx in September.

Americanrevolution provided Pletcher with his third graded stakes victory of the card following triumphs with juveniles Mo Donegal in the Grade 2 Remsen and Nest in the Grade 2 Demoiselle. But the prosperous day did not come without anxious moments as all three of Pletcher’s winners overcame objection. In the case of Americanrevolution, an objection was filed by jockey Manny Franco, aboard third-place finisher Plainsman, for possible interference in mid-stretch, but no change was made in the order of finish.

“We felt good coming into today that we had some horses that were training the way you’d want them to be training leading up to a big race,” Pletcher said. “We were excited about the day coming in and it was one of those rare occasions where everything fell into place and everyone ran their race.”

Americanrevolution back to fifth early on in between horses while Following Sea commanded the field down the backstretch through an opening quarter-mile in 23.19 seconds with Ginobili tracking a close second to his outside.

Positions remained unchanged through a 46.04 half-mile, but Saez began coaxing Americanrevolution around the far turn.

Under right-handed encouragement, Americanrevolution began making up ground from the three path in upper stretch while frontrunners Following Sea and Ginobili duked it out on the front end. After some bumping with Plainsman in the stretch drive, Americanrevolution found a new gear and collared Following Sea in the final sixteenth of a mile to become the first New York-bred to win the Cigar Mile. He won by a half-length and completed the mile in a final time of 1:36.68.

“When he came around the three-eighths he was a little bit off the bit. I had to start riding him to get the momentum and at the top of the stretch, when he switched leads, he gave me that kick,” said Saez, who previously piloted Maximum Security to victory in the 2019 Cigar Mile. “After that, I knew I could win the race but I wasn't sure because I still had Following Sea in front of me and he was battling but in the end Americanrevolution made his move and he got there.”

Saez said he kept a true course down the lane.

“I feel like Manny tried to come out and he was trying to push me away and wanted my spot, but I was in my lane and it looked like the horse inside came out a little bit too and that's what made it look like that,” Saez said.

“Luis rode him terrifically,” Pletcher said. “He kept him going in the turn when he was in traffic and things were getting tight. He responded to an energetic ride. He never gave up on him and I think that was important, especially backing up from the mile and an eighth. He never wanted to take his foot off the peddle. He kept coming and we knew he’d be fit backing up in distance.”

Pletcher admitted some concern on cutting back Americanrevolution back to one mile after the colt made his previous three starts at nine furlongs.

“We weren’t 100 percent positive about the mile, but a lot of times good horses do multiple things really well and I think he’s a great example of that,” Pletcher said. “Constitution puts so much determination into his offspring and they’re just like he was – very tough horses and versatile. It’s great to see him get that Grade 1 win.”

Pletcher praised runner-up Following Sea, who entered off a troubled third in the Grade 1 Breeders’ Cup Sprint at Del Mar.

“I thought he ran great. Johnny [Velazquez] did a super job just letting him find his way up to the lead,” Pletcher said. “He was under pressure most of the way and it looked like Ginobili had put a good neck in front of him and he kept fighting back. He ran a big race.”

Completing the order of finish were Olympiad, Code of Honor, Ginobili, Independence Hall and Pipeline.

Americanrevolution now sports a ledger of 7-5-0-1 and earnings of $944,535, having won at all four New York racetracks this year. This summer, he captured the New York Derby at Finger Lakes and the Albany at Saratoga Race Course, both against state-breds.

Americanrevolution was purchased for $275,000 out of the 2019 Fasig-Tipton New York-bred Yearling Sale, where he was consigned by Taylor Made Sales Agency. He returned $7.50 as the 5-2 favorite.