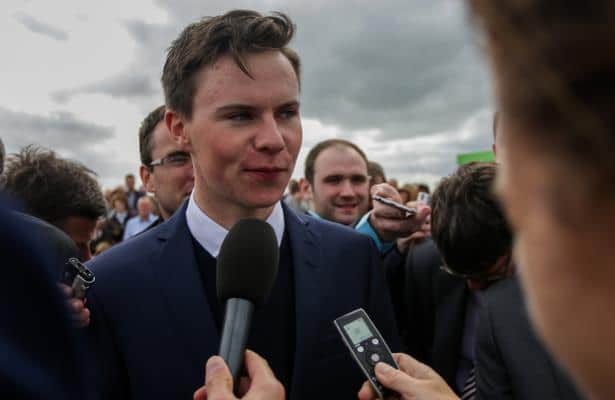 Coming in a once-raced maiden two weeks after her third-place debut over the same course, an American-owned and bred filly was the upset winner of Friday night’s Kentucky Derby points prep in Ireland.

“No firm plans yet,” O’Brien said in a text to HRN. “Delighted to get a stakes win under our belt. Will see how she pulls up before chatting with (the owners). We’ll make a plan from there.”

“I can’t express how proud we are of this young lady raised at Hill ’N’ Dale Farm,” Heider wrote on Twitter. “(Irish bloodstock expert Tony Lacy) loved her from the day she was born, and you were right, Tony. Thank you as always to Joseph O’Brien and everyone on ‘The Hill.’ I’m speechless.”

Staying within two lengths of the lead early in the race, My Generation was taken back to fourth place in the turn before she was let loose in the stretch. With the field fanned across the width of the track, Crosse’s right-handed urging fueled My Generation’s surge down the middle of the course. She took the lead in the last 300 yards and widened it all the way to the winning post.

My Generation tied Highland Avenue, the winner of a Wednesday prep at Kempton, for the lead in European qualifying from which one Kentucky Derby invitation is reserved. The Cardinal Condition Stakes, a synthetic-track race April 1 at Chelmsford City, England, will be the last and most valuable of the points preps in Europe.