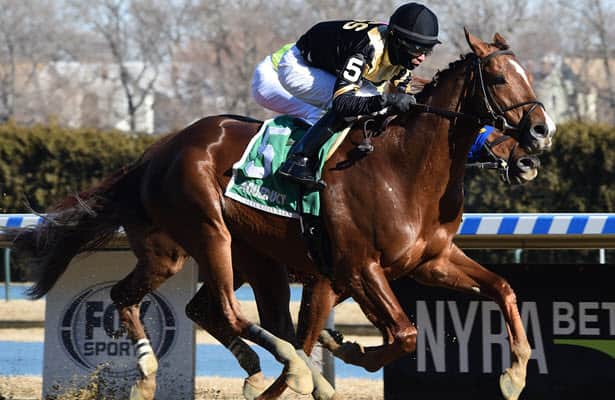 American Power made his first stakes appearance in 16 months a winning one, dueling pacesetter Pete’s Play Call in the stretch before taking command in the final sixteenth of a mile to win the 128th running of the Grade 3, $150,000 Toboggan for 4-year-olds and up by a half length on Saturday at Aqueduct Racetrack.

Owned by Sanford Goldfarb, Irwin Goldfarb and the Estate of Ira Davis, American Power was making his first stakes start since running fourth in the Vosburgh (G1) in September of 2019 at Belmont Park. The 6-year-old son of Power Broker broke well from the outermost post under jockey Kendrick Carmouche and stalked the pace of Pete’s Play Call, who led the five-horse field through the opening quarter-mile in 24.08 seconds and the half in 48.11 on the fast main track.

Pete’s Play Call, under rider Jorge Vargas, Jr., maintained his slim lead out of the turn, staying near the rail as American Power sustained pressure to his outside when straightened for home. The duo continued to go stride-for-stride until American Power earned the advantage in deep stretch, completing the seven-furlong course in a final time of 1:24.28.

American Power, trained by Rob Atras, won his third consecutive race overall in taking the first graded stakes of 2021 on the New York Racing Association calendar. The effort built on his victory by a head against claimers on Oct. 12 at a one-turn mile at Belmont followed by a 3 ¼-length score against optional claimers going seven furlongs on Dec. 11 at the Big A.

“He had been training well going in,” Atras said. “When Kendrick rode him last time, he broke sharp and it seemed like he really got his confidence back. Kendrick had a game plan going in and it worked out great. The outside post definitely helped.”

Off at 4-1, American Power, bred in Kentucky by Gary and Mary West Stables, returned $9.20 on a $2 win wager. He improved his career earnings to $499,359 and also netted Atras his first career graded stakes victory.

“It feels great. I’m not sure if it’s relief or what it is, but it’s just a great feeling,” said Atras, who trained his first winner in 2009.

Carmouche, the Aqueduct winter meet’s leading rider, registered his second Toboggan win, adding to his triumph in 2017 aboard Green Gratto.

“I had the best position looking at the whole screen,” Carmouche said. I thought Manny [Franco, aboard Share the Ride] would go a little bit with the other horse, but I had him in the position where he had to take back. I let the one horse go as easy as he can. When I got to the three-eighths pole I had so much horse I just made it a race home and make me or Vargas win the race. That’s the way I looked at it and the horse ran good.

“Congratulations to Rob and his owners. That was Rob’s first graded stakes win. It’s a cold, brisk day but the winner’s circle made us warmer,” he added.

American Power improved to 3-for-3 since Atras removed blinkers.

“These older horses know how to run,” Atras said. “When they’re younger sometimes the blinkers helped because they need to focus up a bit. It came to the point where he didn’t really need them. It’s all about having confidence, ability and heart, and he has all three.”

Michael Dubb’s Pete’s Play Call, who won the Gravesend in his 8-year-old debut on Jan. 2 at Aqueduct, finished 2 ¾-lengths clear of 6-5 favorite Share the Ride for runner-up status. The Rudy Rodriguez trainee has finished first or second in six of his last seven starts.

“He had no excuses,” Vargas, Jr. said “I would have liked to have been just behind [the pace], but we had the one hole, so we really had to go from the gate. He was just second best today.”

Drafted and Stan the Man completed the order of finish.