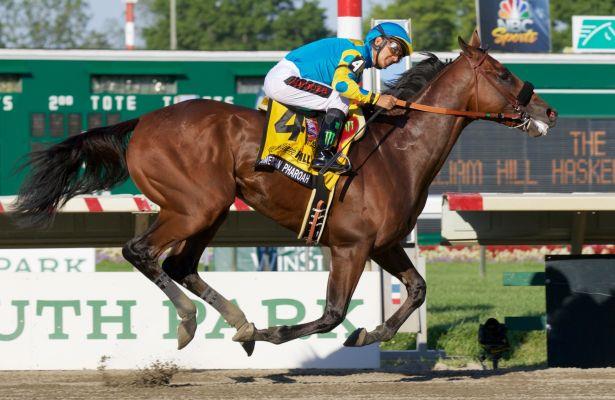 Photo: Matthew Scott
Triple Crown hero American Pharoah tops a list of 16 sophomores nominated to the Grade 1, $1.25 million Travers on August 29 at Saratoga Race Course.
Owned by Zayat Stables, American Pharoah breezed five furlongs in 1:00.13 Sunday morning at Del Mar, his first timed move since his runaway victory on August 2 in the Grade 1 Haskell at Monmouth Park. After the work, Hall of Fame trainer Bob Baffert said he would wait until next Sunday's scheduled breeze before making a decision on whether to run the 3-year-old Pioneerof the Nile colt in the 1 ¼-mile "Mid-Summer Derby."
The New York Racing Association will increase the purse for the Travers to $1.6 million should American Pharoah compete in the race. Three Triple Crown winners have run in the Travers, with Gallant Fox finishing second in the 1930 edition, Whirlaway winning in 1941 and Affirmed finishing second to Alydar via disqualificiation in 1978.
Joining American Pharoah among the Travers nominees are a number of his familiar foes, including Keen Ice, who was seventh in the Kentucky Derby, third in the Belmont and second in the Haskell; Grade 1 TwinSpires.com Wood Memorial winner Frosted, fourth in the Derby and second in the Belmont; Preakness runner-up Tale of Verve, who was seventh in the Belmont; Grade 2 West Virginia Derby winner Madefromlucky, second to American Pharoah in the Grade 2 Rebel, fourth behind him in the Grade 1 Arkansas Derby - both at Oaklawn Park - and sixth in the Belmont; and Upstart, who was 18th in the Derby and third in the Haskell.
Other nominees who have faced American Pharoah previously are Frammento, 11th in the Derby and fifth in the Belmont; Far Right, second in the Arkansas Derby and 15th in the Kentucky Derby; and Mr. Z, third in the Arkansas Derby, 13thin the Derby and fifth in the Preakness.
Nominated also is 2014's 2-year-old champion Texas Red, who finished third to  American Pharoah in the Grade 1 Frontrunner at Santa Anita Park last September. Knocked off the Triple Crown trail with a foot bruise after a second-place finish in the Grade 2 San Vicente, the Breeders' Cup Juvenile winner returned to finish second in the Grade 3 Dwyer on July 4 at Belmont Park and then posted a half-length victory over favored Frosted on August 1 in the Grade 2 Jim Dandy at the Spa.
Among those who would be meeting American Pharoah for the first time are the first- and third-place finishers from the July 31 Curlin at the Spa, Smart Transition and King of New York; Japan, who was third in the Jim Dandy; Tommy Macho, third in the Dwyer at Belmont Park behind winner Speightstown and Texas Red; Face of Winner, making his stakes debut; and recent maiden winner Mid Ocean.