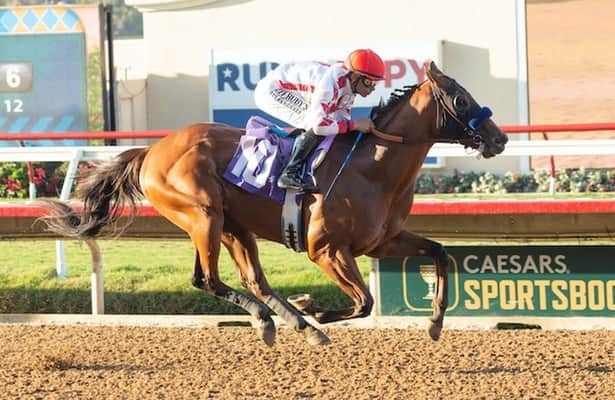 Yet, this running comes with the caveat that none of Baffert’s runners can earn qualifying points Friday toward the first Saturday in May.

Corniche, Rockefeller (3-1) and Flying Drummer (10-1) are all currently ineligible to collect Road to the 2022 Kentucky Derby points, which the American Pharoah doles out on a 10-4-2-1 basis to its top four finishers. That is due to Baffert’s suspension from entering horses at Churchill Downs, a ban that runs through the track’s 2023 spring meet.

The Churchill suspension is just part of the fallout stemming from Medina Spirit’s failed drug test after winning the 2021 Kentucky Derby. Baffert is engaged in courtroom battles with regulators in Kentucky and New York while the Breeders’ Cup reviews his participation for November’s World Championships at Del Mar.

Baffert’s barn remains stocked with pricy 2-year-olds, despite the fact none of them can collect Kentucky Derby points while racing for him.

Friday’s morning line favorite, Corniche, sold for $1.5 million to owner Speedway Stables at an Ocala sale in April. The Quality Road colt won by 4½ lengths on debut Sept. 4 at Del Mar and retains the services of jockey Mike Smith for the American Pharoah.

Michael Lund Petersen, owner of Baffert’s champion filly Gamine, bought Flying Drummer for $850,000 at the same Ocala sale. The Gun Runner colt is 0-for-2 to start his career with a pair of runner-up efforts at Del Mar.

Rockefeller was a $750,000 purchase last September at Keeneland for a conglomerate of SF Racing, Starlight Racing and Madaket Stables. He was a Del Mar debut winner and makes his second start here.

Of the four non-Baffert runners entered for the American Pharoah, the shortest price on the morning line is Oviatt Class (3-1). Keith Desormeaux trains the Virginia-bred Bernardini colt, who broke his maiden third out going a mile at Del Mar.

Friday’s American Pharoah winner collects a “win and you’re in” berth to the Breeders’ Cup Juvenile. Major General won the division’s only qualifying race to have run thus far, the Iroquois Stakes (G3), with more bids to be earned Saturday in Belmont Park’s Champagne Stakes (G1) and Oct. 9 in Keeneland’s Breeders’ Futurity (G1).

Here is a look at the 2021 American Pharoah Stakes field (trainer and jockey in parentheses) with morning line odds:

Here is a look at the three other stakes races on Friday’s Santa Anita card. Post times are EDT, and TVG will broadcast all races.

Forbidden Kingdom (2-1) will look to improve to 2-for-2 in this spot rather than stretching out on the dirt in the American Pharoah, a race named for his sire. The Richard Mandella trainee debuted a winner in August at Del Mar and retains the services of jockey Juan Hernandez for this Breeders' Cup Juvenile Turf Sprint "win and you're in" race. One Timer (5-2) ships to California off winning efforts at Arlington Park and Woodbine for trainer Larry Rivelli. Another shipper, Miss Alacrity (5-2), was a last-out stakes winner at Monmouth Park.

Grace Adler (9-5) became a Grade 1 winner last month with a Del Mar Debutante score and aims to improve to 3-for-3 here in this Breeders' Cup Juvenile Fillies qualifier under jockey Flavien Prat. The Curlin filly and stablemate Censorship (12-1) are ineligible to collect the Road to the Kentucky Oaks points that the Chandelier also awards its top four finishers. That is due to her trainer Bob Baffert’s suspension from running horses at Churchill Downs through the track’s 2023 spring meet. The second choice on the Chandelier morning line is Ain’t Easy (5-2), a first-out Del Mar winner for trainer Phil D’Amato.