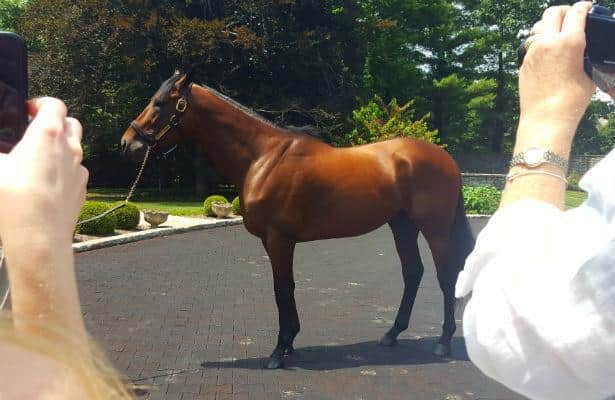 Photo: Candice Cicalla Curtis
Tuesday before the Preakness I sat at my computer, frantically refreshing my screen, determined to finally get a ticket to see American Pharoah at Coolmore Ashford Stud. The $20 tickets were set to go on sale at Noon on the dot at VisitHorseCountry.com, the new portal for horse farm tours in the bluegrass. The last time they'd sold tickets for Pharoah, I was sadly, shut out.
Not this time - at noon I clicked on the Coolmore tour page and navigated directly to the date I wanted - Wednesday, July 6 - my birthday. In a few more clicks, I had secured my spot for a meeting with the 12th Triple Crown winner, the most honored birthday guest a racing fan can imagine.
I was lucky - within the next 55 minutes, every tour time in June and July sold out - again!
Last week, I made the trip out to Versailles, Kentucky for my eagerly-awaited visit.
The approach to the farm takes you through the picturesque, rolling farmland and iconic board fences that define the region. By the time you're pulling up to the imposing stone entrance, you almost want to join the horses out in the fields - no worries, no bills... A snazzy little detail of the whole experience happens right at the very beginning. You have to press the farm's intercom and tell them your name to open the gate. It makes you feel very official, like an insider. Then, the enormous, wrought-iron gate swings open, and the Pharoah's court lies ahead of you.
All tour groups meet at a tidy stone building that at one time was the farm's office. Inside, the two guest rooms are full of memorabilia from Coolmore's champions, and flat-screen TVs show American Pharoah's life story on a loop. The tour guide, Nathaniel, himself a groom, gathered up the group of about 20 of us, and we headed out to the main stallion barn for our first brush with greatness. This barn is like something out of MTV's Cribs, if they had a farm episode - a magnificent limestone building with a medieval-looking sliding door and arched entryway. It is definitely not your average horse barn! From out of the darkness, American Pharoah stepped into the sunlight to the ooo's and aahh's and camera snaps of his adoring fans.

Tour groups are separated from the horse by a small gate - it doesn't block the view at all, but it does keep the crowds from getting too close. Pharoah's groom led him around so that we got a good view of both sides of the Triple Crown and Breeders' Cup winner. As AP posed, Nathaniel gave us his career stats and also answered questions from the group. AP has settled in nicely to his new role as breeding stallion and ambassador for fans.
The best part was when Nathaniel had the groom turn AP to face the gate - it was SELFIE TIME!

I invited AP to my birthday party pic.twitter.com/ybG1CD0VYw

One by one, we were allowed to go up next to Pharoah (with the safety gate in between) and get a photo! Nathaniel happily took group shots so that everyone could be in pictures. AP took it all in stride, standing majestically, eyeing everyone with a ruler's gaze.
Because of the difficulty in getting a ticket, there isn't a time limit for these photos - Nathaniel encouraged us to enjoy this time with the champ and let everyone get as close as possible - without petting him, unfortunately.
After about 20 minutes of Pharoah time, the heat began to take its toll, and AP ducked back into the cool barn. We followed him inside, where we were introduced to Giant's Causeway and Munnings. AP stood in his stall as we snapped more photos, ever the professional celebrity.
The tour continued into two more barns, where we were introduced to Uncle Mo, Fusaichi Pegasus and Thunder Gulch, among others. The tour time coincided with feeding time, so the horses were talkative, especially Uncle Mo.
We ended up after an all-too-brief hour inside the breeding shed, standing on the cushioned rubber shavings and getting a quick lesson in the Thorougbred birds & bees. As the tour group said our goodbyes to Nathaniel, I took a final, long look at the beautiful grounds of Coolmore: the towering, shady trees, the stone barns, the wildflowers and the smell of grass and horses. HEAVENLY!
It was an amazing way to spend a birthday, one I will never forget.
-- By: Candice C. Curtis (@skipaway2000)
American Pharoah Coolmore Ashford Stud