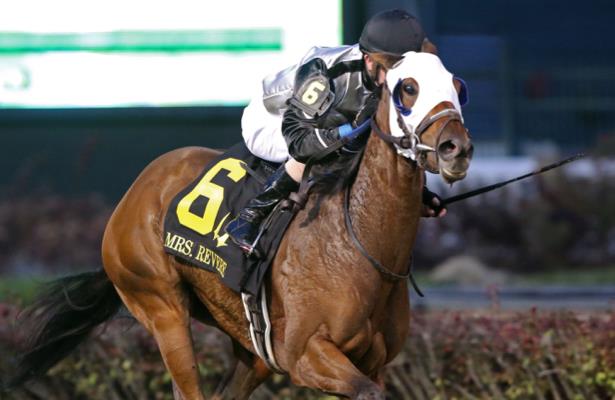 The final Grade 1 race of the year runs Saturday in the form of the American Oaks, now no longer run either in the summer or at Hollywood Park. But it remains an important fixture for 3-year-old fillies going 10 furlongs on grass.

For one, it's a chance to snag a top-level win while still in age-restricted company. For another, a victory sets up the winner to contend next year as a top older horse.

Here's a look at the field with the morning line:

What sticks out here?

Well, Amandine -- should she not scratch on race day -- just ran Wednesday at Santa Anita Park, where she won the Lady of Shamrock Stakes in easy fashion. The European import is now 2-for-2 in the U.S. for Jeff Mullins, whose training job on 3-year-old male turf runner River Boyne has also been exquisite.

Among the locals, multiple stakes winner Paved was established as the morning line favorite off a 12th-place effort over a giving surface in the Breeders' Cup Filly & Mare Turf. The question here is whether there's enough pace in the race for the Michael McCarthy trainee. Californiagoldrush could control the early tempo and benefit as the 5-2 second morning line choice.

Post time for the American Oaks, Race 8 of 10, is 6:34 p.m. ET in Arcadia, Calif. TVG will carry the race with on-site coverage and handicapping, or you can live stream it through advanced deposit wagering services such as NYRABets.

Also on the card

The Grade 3, $150,000 Robert J. Frankel Stakes for 3-year-old fillies and mares and up runs as Race 4 at 4:34 p.m. ET. While 12th in Del Mar's Matriarch (G1), there appears to be no value in betting Fahan Maura, who was established as the morning line's top choice. Others in the field of eight are the hard-knocking Canadian, Escape Clause, and Excellent Sunset, both 7-2.

• Super Screener: Why the best contender may not win

• Why the American Oaks distance gives Colonia an advantage