American Gal scampers to an impressive victory in Anoakia 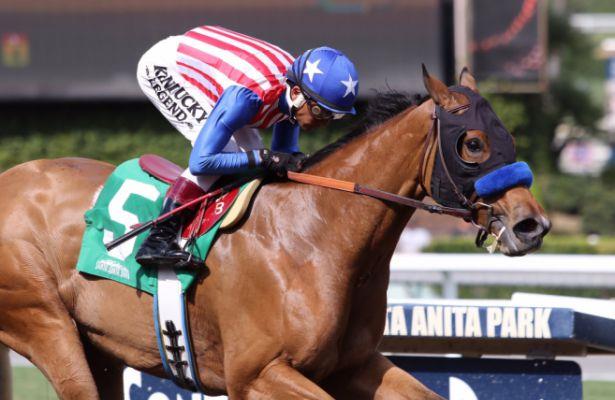 The overwhelming 1-9 favorite, American Gal ran like it, taking Sunday’s $70,000 Anoakia Stakes for 2-year-old fillies by 6 ½ lengths under Rafael Bejarano.  Owned and bred by Kaleem Shah, the Kentucky-bred filly by Concord Point, trained by Bob Baffert, covered six furlongs in 1:10.46.

Breaking from the far outside in post position five, American Gal sat a close third into the far turn and overtook dueling leaders Bernina Star and Woot Woot leaving the quarter pole en route to an authoritative victory.

“She surprised me today,” said Bejarano.  “I thought she would show more speed away from the gate, more than last time.  But today, she was calmer in the post parade and even in the paddock and at the start as well.

“She finished better today than in her last race.  Last time, she was head and head, but she showed more finish today, more kick.”

“Today was good, it’s always nice having a home-bred,” said Baffert.  “It’s crazy, I think she blew a shoe leaving there, I want to see how her foot is.”