Amazombie vs. The Factor in San Carlos 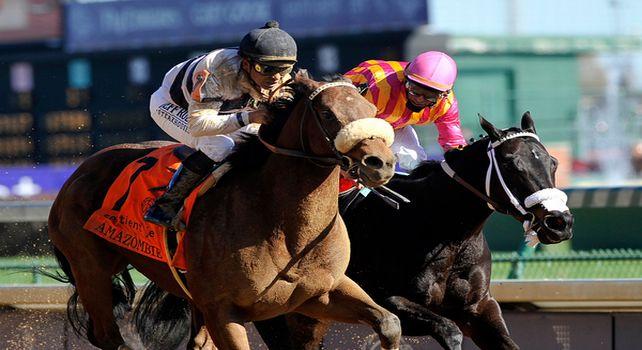 An off-track tabled the 6-year-old California-bred gelding’s scheduled return in the Jan. 21 Palos Verdes Stakes (Grade II). Weather is not expected to be a factor when Amazombie finally resurfaces from his gutsy neck victory over Force Freeze at 7-1 odds in the Grade I, $1.5 million Breeders’ Cup Sprint at Churchill Downs on Nov. 5.

By all accounts, trainer and co-owner Bill Spawr’s late-blooming champion is primed to launch his 2012 campaign. He faces a formidable test against a solid cast that includes trainer Bob Baffert’s The Factor, sizzling winner of the Grade I Malibu Stakes at seven furlongs on the Santa Anita meet’s opening day, Dec. 26.

“It’s hard to surpass the year he had (in 2011), but we feel he could be as good,” said Spawr, who owns the winner of $1,525,708 in partnership with Tom Sanford. “We ain’t seen the best of him,” declared Mike Smith, aboard for 12 of Amazombie’s last 13 starts. Should Amazombie earn another Sprint Eclipse this year, he would join Housebuster (1990-91) as the only two-time winner.

Hall of Fame jockey Smith, who is now just 10 wins shy of 5,000 career victories, was along for the complete ride last year when Amazombie’s career soared. A non-stakes winner in 14 starts entering his 5-year-old season, the son of Northern Afleet never finished out of the money last year while posting a 5-1-3 record in 9 starts and earning $1,327,000. During his two previous seasons of racing, Amazombie had earned virtually one-tenth of what he took in during his championship season.

“I know he’s getting older, but man, he’s just getting right,” said the 46-year-old Smith. “I mean in November (for the Breeders’ Cup), Bill had him really, really good. But from the looks of things, and you don’t know it until they run, he seems to have gotten even better.”

Smith referred to fellow jockey Alex Bisono, who regularly exercises Amazombie. “I know Alex knows he has (gotten better),” said Smith. “He told me the other day the horse is a machine, and he never said that about him before. Bill (Spawr) is beside himself with this horse right now.”

Coming off some down time ought not to be a concern. The bay gelding, bred by Gregg Anderson, has been victorious on each of the past four occasions when returning from a layoff. Amazombie will break from post position No. 2 on Saturday.

The presence of The Factor makes Amazombie’s assignment all the more interesting. They met once before, and it was only two races back for Amazombie, Santa Anita’s Grade I Ancient Title Stakes on Oct. 11. The Factor went into the six-furlong race as the 2-5 favorite, but Baffert’s gray colt would fade to fourth, 5 ¼ lengths behind the victorious Amazombie at 3-1.

Owned by Fog City Stable and George Bolton, their $250,000 sales purchase was pointed to the Grade I Breeders’ Cup Dirt Mile rather than the Sprint on racing’s championship weekend at Churchill Downs. In the Dirt Mile, The Factor wasn’t. After setting the early pace, he faltered badly, finishing eighth.

The Factor, however, bounced back from two showings that deeply disappointed Baffert with his scintillating 3 ½-length victory in the Malibu. “When The Factor runs his race, it’s going to be tough to really beat him,” Baffert said afterward. “The Factor we know showed up today.” Said jockey Martin Garcia, “I don’t think there was a horse that could beat him today.”

The Factor, whose name was taken from commentator Bill O’Reilly’s widely-watched Fox News show, comes into the San Carlos with earnings of $652,180 from 5 wins in 9 starts. With Garcia back aboard, the 4-year-old son of War Front drew post position No. 3, just outside of Amazombie. Both carry 123 pounds.

Mensa Heat, a California-bred son of Unusual Heat who was claimed for $25,000 last April, came within three-quarters-of-a-length of Amazombie when rallying for third in the Ancient Title. Trained by Ted H. West for Peter Redekop, the 6-year-old gelding has won 5 of 9 starts including a pair of ungraded stakes since being claimed. Joe Talamo will handle Mensa Heat.

Padua Stables’ Rothko, trained by Steve Asmussen, ran second to The Factor in the Malibu, his first stakes endeavor. A 4-year-old homebred son of Arch, Rothko had a three-game winning streak snapped in the Malibu. He has posted a 3-2-0 record in six starts while earning $158,080. Leading jockey Joel Rosario will ride for the first time on Saturday.

Sway Away, second to The Factor in last February’s Grade II San Vicente Stakes at seven furlongs, returns from eight months on the sidelines with Rafael Bejarano to ride for trainer Jeff Bonde. The 4-year-old son of Afleet Alex shows a 2-2-0 record in seven starts with earnings of $157,800 for a partnership headed by Batman Stable.