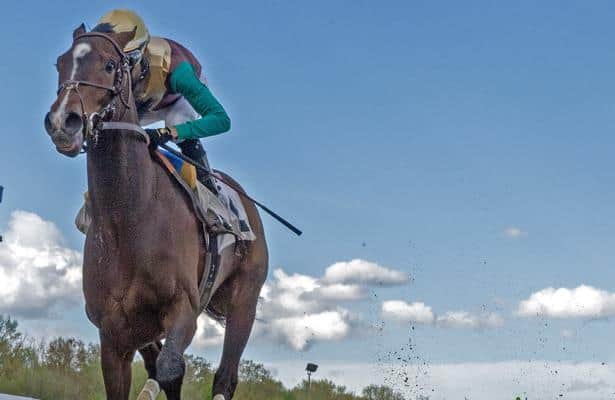 The 1-9 favorite Alwaysmining ran to his odds Saturday at Laurel Park, winning the Federico Tesio Stakes by 11 1/2 lengths to earn a "Win and You're In" Preakness Stakes spot.

The gelding by Stay Thirsty is now 3-for-3 in 2019, winning each stakes stop at Laurel Park.

“The plan was to try to make the lead, but I didn’t want to chase them, so I let them go. I decided to take him back and put him behind them," said jockey Daniel Centeno. "He was comfortable, nice and relaxed. I put him on the outside on the backstretch and when it was time to go, he took off,”

“[The Preakness] will be a completely different game. I told Kelly, he’ll be completely relaxed," he continued. "We don’t need to put him on the lead. We can do whatever we want with him."

With 2 1/2 furlongs left, the Kelly Rubley trainee, who showed a new dimension to rate behind his rivals, made a three-wide bid past Bozzini and Trifor Gold before cruising in the stretch.

“As long as we come back ok, that’s our goal,” Rubley said.

“You just hate to get overconfident, but this is what I had expected to happen so I’m really glad it came true,” she continued. “We’re all very excited. It’s a fabulous day.”

Alwaysmining becomes the eighth Maryland-bred and first since Concealed Identity in 2011 to win the Tesio since it was opened up beyond restricted company in 1987.

For Runnymede Racing, Alwaysmining has now won six straight overall. Connections considered the Kentucky Derby trail before electing to remain in Maryland, where the horse was bred.