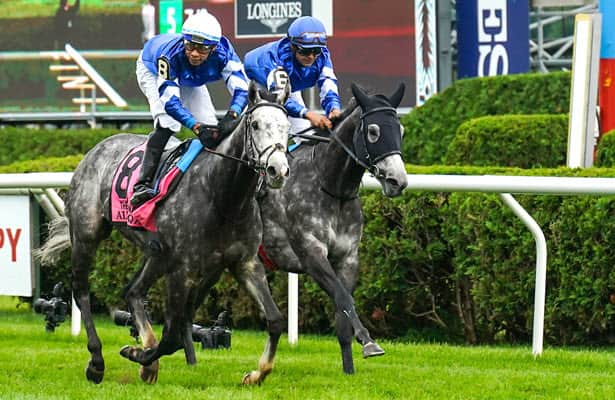 Godolphin owned and Charlie Appleby-trained fillies Althiqa and Summer Romance gave the racing public a sense of déjà vu as they replicated an exacta from their North American debut in the Just a Game (G1) at Belmont Park. On Saturday, Althiqa bested her stablemate yet again in Saturday’s 83rd running of the Grade 1, $500,000 Diana at Saratoga Race Course.

Althiqa replicated last month’s score down to the same three-quarter length winning margin from the Just a Game when capturing the Diana. While the result was the same, how it transpired varied. Rather than targeting Summer Romance with an inside stretch rally, Althiqa collared her stablemate from the outside and was wrapped up in the final strides.

Breaking from the outermost post in the eight-horse field under Manny Franco, Althiqa took to the rear of the field past the grandstand as Summer Romance recorded the opening quarter-mile in 23.57 seconds. Down the backstretch, Summer Romance maintained her advantage with Vigilantes Way sitting off her flank in second through a half-mile in 48.17 over the good inner turf course.

Althiqa began inching her way closer to the front approaching the far turn and made a sweeping five-wide move at the top of the stretch. Summer Romance was under a full out drive under jockey Luis Saez as Althiqa loomed large with her outside bid. Just strides outside the sixteenth-pole, Althiqa took command and completed the nine furlongs in 1:47.65.

Althiqa and Summer Romance saw an extra furlong from the Just a Game and Franco said he took the added distance into account when piloting the talented gray filly for the first time.

“I just wanted to wait as long as I could because I knew the distance was further than the last race,” Franco said. “That was the question, but she did it. They didn’t tell me much. They just told me to cover her and follow somebody until I made my move. I think that was the key; that she was so relaxed behind horses and then she gave me a nice move and nice kick.”

Following the Just a Game, both fillies stayed in New York under the watchful eye of Appleby assistant Sophie Chretien to prepare for Saturday’s engagement.

“We’ve been in America since the first of May; it’s the 17th of July and we had two big targets in Grade 1s and we just couldn’t do better,” Chretien said.

Chretien said Althiqa has improved significantly since arriving in the United States.

“Summer Romance didn’t take the rematch with Althiqa, but what I realized with Althiqa with all the time she’s been with us, she’s becoming stronger physically and mentally. Summer Romance is a lot more of a nervous filly,” Chretien said. “It’s a great feeling. It’s my first time coming to America and you don’t know the tracks, but these horses are smart. You just have to listen to them.”

Althiqa, who returned $9.90 in victory, added a third graded/grouped victory to her ledger through a consistent 11-6-2-3 record and banked $275,000 in victory, pushing her lifetime earnings just shy of the three-quarter million mark at $741,213.

A Great Britain homebred, Althiqa is by Dark Angel and is the first offspring out of the Shamardal mare Mistrusting, who has a 2-year-old full-sister and a yearling full-sister to Althiqa.

Prior to the Just a Game, Althiqa was third to Summer Romance in the nine-furlong Balanchine (G2) on Feb. 18 at Meydan Racecourse in Dubai after winning her 2021 debut in the Cape Verdi (G2) at one mile over the same course.

Saez, who maintained the mount aboard Summer Romance from the Just a Game, was gallant in defeat.

“She was good but she got beat,” said Saez, who has already won two stakes this meet. “I feel like she ran her race. I knew the 4 [Vigilantes Way] had speed and was going to go with me, but that was the race.”