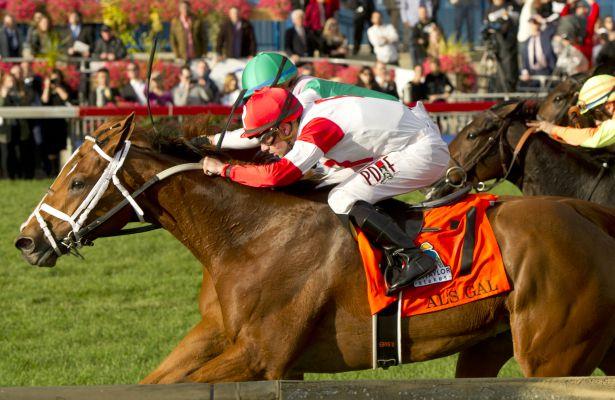 Al’s Gal, prominent throughout, held off a furious late charge from Suffused to capture the Grade 1, $500,000 E.P. Taylor Stakes at Woodbine by a nose and give the United States a 1-2 sweep in the 1 ¼ turf race for fillies and mares.

There were six Europeans in the field of 12 for the E.P. Taylor but Banzarj, the only 4-year-old in that contingent, was the only one to crack the top four as she finished third at 21-1.

Best In The World, the Irish invader who was sent off as the 3-1 favorite for trainer Aidan O’Brien and jockey Ryan Moore, seemed to be in a good spot while running third on the rail.

Suffused, who been racing within striking distance in fifth, just before Banzari, with Guapaza well back in the field. There seemed to be plenty of chances turning for home but Parvaneh was hanging tough through a mile in 1:37.93 and Al’s Gal was not going away.

Al’s Gal finally hit the front heading into the final furlong and was all out to hold off Suffused with a rallying Banzari just a half-length back. Guapaza, closing strongest of all on the outside, was just another head behind in third.

Completing the order of finish were Rainha da Bateraia, Swiss Range, Nezwaah, Parvaneh, Tuttipaesi, Strut the Course, Aim to Please and Best of the World. Uchenna was scratched. The final time on a firm course was 2.01.6.

Jockey Florent Geroux is now 3-for-3 aboard Al’s Gal with their most recent collaboration a victory in the Kentucky Downs Ladies Marathon on Sept. 15.

“There was no traffic for me today,” said Geroux. “When we broke from the gate I was right there, second position all the way and when I asked her turning from home she just gave me a nice turn of foot and was very brave.

“I don’t have any game plan especially with horses like this who are very manageable and have tactical speed.”

Jose Ortiz, aboard runner-up Suffused, was philosophical in defeat.

"I wish I could have been in the clear before but I followed the winner the whole way,” said Ortiz. ”It was very close in the end. I thought I had it but I guess the head bob went to him."

Al’s Gal, claimed for $35,000 at Gulfstream in February of 2015, was winning her third stakes since then but her first of the graded variety.

The 5-year-old mare is owned by Ken and Sarah Ramsey and trained by Mike Maker, the connections behind this year’s Queen’s Plate winner Sir Duddley Digges.

Calgary Cat pounces in the Nearctic

Calgary Cat, the senior member of the field at age 6, came charging down the outside under Luis Contreras to score by a head at 15-1 in Sunday’s Grade 2 Nearctic Stakes at Woodbine.

Eight horses went postward in the $300,000 Nearctic, a six-furlong turf race for 3-year-olds and upward, and it was Kentucky shipper Expected Ruler who took charge early and opened up two lengths through an opening quarter in :22.39. Stacked Deck had taken closest attendance with Divine, the lone European shipper who was running third after breaking from the inside, another half-length back in third.

Then the Nearctic turned into a mad scramble in deep stretch as Conquest Enforcer had established a tentative lead with Stacked Deck and Full Mast running hard to his inside and Calgary Cat rallying strongly.

In the end, it was Calgary Cat, who was Canada’s champion male sprinter in 2014, who prevailed over 2015 Sovereign Award male sprinter Stacked Deck. Conquest Enforcer was just another head back in third and three-quarters of a length ahead of Full Mast.

Springhouse, Divine, Passion for Action and Expected Ruler completed the order of finish.

“I got a prefect trip,” said Contreras, who rode Calgary Cat for trainer Kevin Attard. “My horse gave me anything from the quarter pole to the wire.”

“It was his first time going 5 ½ (on turf). He came flying at the end. He’s worked into this race really well. We were expecting a good performance out of him,” said Attard.

For Stacked Deck, there was honour in defeat.

"The trip was perfect,” said jockey Rafael Hernandez.  “My horse just didn't see the other horse (Calgary Cat) coming on the outside.

"It was just a tough beat, he ran hard to the wire. He dug in from the sixteenth pole. He's a fighter."