Aloha West, 'better than ever,' is pointed to Met Mile 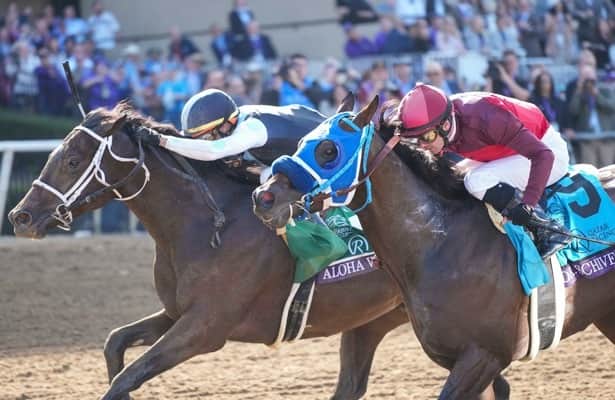 Aloha West, winner of last year's Breeders' Cup Sprint, is being pointed to the $1 million Metropolitan (G1) on June 11 at Belmont Park.

In his first start since the Breeders' Cup, the 5-year-old son of Hard Spun finished third in the Churchill Downs (G1) on the Kentucky Derby undercard.

Trainer Wayne Catalano told Horse Racing Nation Monday that the 5-year-old son of Hard Spun "is better now than he's ever been."

The Met Mile would be the first time Aloha West would race farther than seven furlongs. Is that a concern? "We don't know yet," Catalano said.

Jackie's Warrior won the Churchill Downs by four lengths over Reinvestment Risk, with Aloha West another length behind. Under Jose Ortiz, Aloha West was in second at the top of the stretch "but weakened late in the drive," according to the Equibase chart.

"It was a good race off the bench. I liked everything about the race. I like the way he came out of the race. He's moving forward, and he'll be ready to run."

Aloha West has had one work since the Churchill Downs, breezing four furlongs in 48.00 seconds at the Louisville, Ky., track.

His Breeders' Cup victory is his only graded stakes win, although he was second by a neck in his preceding start in the Phoenix (G2) at Keeneland.