'All systems go': Art Collector on track for Preakness Stakes 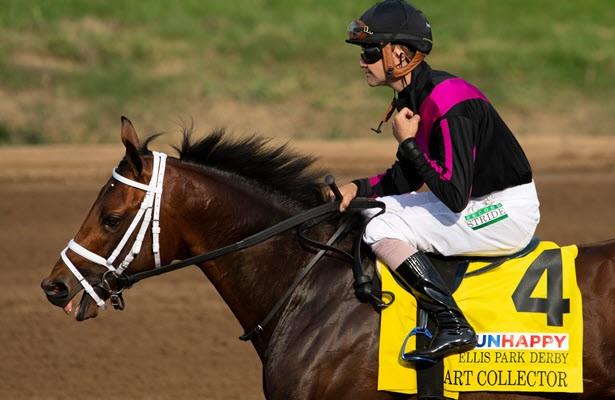 Bruce Lunsford’s Art Collector remains on track for the Oct. 3 Preakness Stakes after missing the Kentucky Derby (G1) with a minor foot issue.

Art Collector worked a half-mile in 48.10 seconds on Saturday at trainer Tommy Drury’s Skylight Training Center base under jockey Brian Hernandez Jr. Drury said the son of 2006 Preakness winner Bernardini likely will ship into Churchill Downs within the next few days and work over that track this weekend.

Art Collector, who would have been the co-second choice behind Tiz the Law, was not entered in the Kentucky Derby after nicking a piece of flesh off his left front heel in training.

“He just grabbed the back of his quarter,” Drury said. “The thing was sensitive and sore to the touch. There was a little flap there that needed to be trimmed away. We knew when we trimmed it away, it was going to be even more sensitive, and the right thing to do was sit that one out and put it behind us.”

“We were able to get him right back to the track,” he said. “I jogged him the first day and he was back to galloping. It wasn’t that he had some major issue, it was just bad timing. There wasn’t much we could do for it Derby Week with the medication rules. To run, it would have just been for ego. If you don’t win the Kentucky Derby, then it doesn’t matter. Nobody wants to talk to the guy who finishes fifth.

“At least for me, I don’t want to just lead one over there just to be leading them over there. I want to take my best shot. Had he been a $10,000 claimer, could we have patched him up? Sure we could have. But is that the right thing to do for the horse? Absolutely not. Now we’re going to go into the Preakness, and we’re going to take our best shot. I’m not thinking about a race. I’m thinking about a career. Bruce has already said he’s more than willing to run this horse next year. So why would we do something stupid at this stage of the game?”

The lifelong Louisvillian might have missed out on what would have been his first Kentucky Derby starter, but he said trainers make such decisions all the time outside the spotlight.

“Have I thought, ‘What if?’ Sure I have,” Drury said. “That being said, I slept better that night than I did the entire two weeks leading up to the race. I was very comfortable with the decision I made, and I’m very comfortable where the horse is. We want him to be good for the long haul and not just one race.”

Now the trainer is looking forward to his possible Triple Crown debut in the Preakness.

“The timing of it is good,” he said. “The thing I like is that he doesn’t have to take his racetrack with him. I would expect him to do that in Baltimore as well. I’m just looking forward to giving him the opportunity to run against those horses. He may or may not have run well in the Derby had he been there. We’re certainly not going to take anything away from the winner. He ran a huge race. But we’re looking forward for our opportunity to go after him.”

Drury said he’s really glad now that Art Collector ran in the Aug. 9 Ellis Park Derby at 1 1/8 miles instead of training up to the Derby off of the July 8 Blue Grass.

“Absolutely,” he said. “This didn’t really interfere with our schedule a whole lot. We missed a couple of days and we were right back at the track. He’s been training very forwardly. He worked good Saturday, so it seems like at this point, it’s all systems go.”