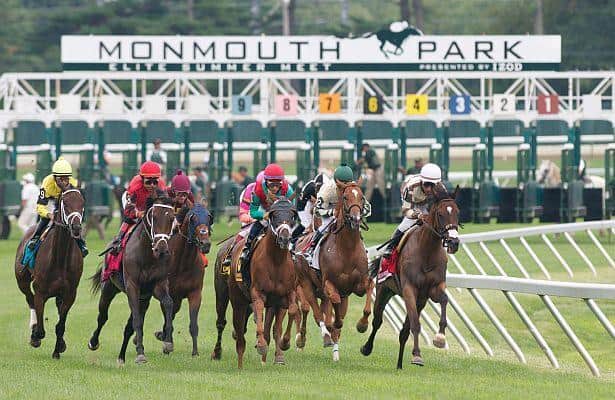 Algier’s Point jumps from maiden claiming ranks to her first stakes try when she enters the gate with seven rivals in Saturday’s $60,000 Colleen Stakes for 2-year-old fillies going five and a half furlongs on the Monmouth Park turf.

“She has been doing really well,” said Joan Scott, who trains the horse for Michael Laurato. “She’s really moving forward and eats well. When you have a 2-year-old win this early, it’s great to take a chance in stakes company.”

The 2-year-old filly by Eskendereya out of the Candy Ride mare Beautiful Candy broke her maiden at first asking in a $40,000 maiden claiming event going five furlongs on the Monmouth main track when she sat third for most of the race before storming home to grab the victory by a head.

Algier’s Point has worked twice since the debut score, both over the Monmouth Park dirt. The latest came on July 28 when she went four furlongs in :51.

“I’m happy with the outside post,” said Scott. “I think the extra half furlong will help her. Eventually, I think she will want to go two turns.”

To get to the winner’s circle in the Colleen, Algier’s Point, who breaks from post eight, will have to get by two stakes placed horses, the Ben Colebrook trained China Grove, who finished second in the Astoria Stakes on the main track at Belmont Park on June 9 and Harlands Thunder, for trainer Bill Mott, who graduated from the maiden ranks on her first try and finished third in the Grade 3 Schuylerville in her latest start at Saratoga on July 22.

Two of Algier’s Point’s rivals in the race are coming in off victories including Awesome Drama, for Gregg Sacco, and Iron Mizz out of Todd Pletcher’s barn.

PHONE MY POSSE GETS THE OUTSIDE DRAW FOR TYRO

Phone My Posse will try to make it 2-for-2 to start his career when he enters a field of seven in Sunday’s $60,000 Tyro Stakes for 2-year-olds going five and a half furlongs on the Monmouth Park turf.

“He has training well and doing everything right,” said trainer Chuck Spina, who also owns the horse with Joseph and Gayle Ioia. “Being by Posse, he should like the turf because most of them do. I expect him to run really well.”

The 2-year-old gelding by Posse out of the Phone Trick mare Phone Express took the field gate-to-wire in his four and a half furlong debut on June 3 in a $45,000 maiden special weight event.

“He had some serious gas when he broke from the rail in his first start,” said Spina. “He worked great the other day and did it in hand. The post doesn’t bother me. I’d rather be on the outside.”

Phone My Posse, who will break from post seven Sunday, has worked three times since his maiden score. The most recent came on July 24 at Monmouth Park where he went four furlongs in :48, third fastest of the 68 horses to go that distance on that day.

Two of Phone My Posse’s rivals are exiting starts in graded stakes company. Bay Numbers comes out of the Grade 3 Sanford at Saratoga on July 23 for trainer Eddie Plesa Jr. and Lightning Dove’s most recent start for conditioner Wesley Ward came in the Grade 3 Schuylerville on July 22.

Other than Phone My Posse, two other entrants in the Tyro are coming into the race off debut maiden scores. Wesley Ward trainee Iron Mane graduated on July 23 at Indiana Grand and Ardmore Bay, conditioned by Tom Morley, made a winning debut on July 4 at Belmont Park.

The Tyro will be race 9 in Sunday’s 10-race card, complemented by the second day of the first-ever Italian Festival atMonmouth Park. Gates open at 11:30 a.m. with first post scheduled for 12:50 p.m.

The first-ever Italian Festival brings a taste of Italy to the Jersey Shore for the two-day event this weekend atMonmouth Park.

The festival will include authentic music, games for all ages including two bocce courts, and delicious food from Luzzo’s La Pizza Napoletina, Mangia Mangia Catering, Four Boys, The Little Sicilian, Enzo’s Pizza, The Tasty Trolley and so much more.

Live music will be playing “On the Green” all weekend long with the Metropolitan Festival Band on Saturday as well as the Rory Daniels Band on Sunday, which is also Family Fun Day featuring pony rides, face painters and bounce house.

Saturday’s 11-race, live thoroughbred racing card will be headlined by the $60,000 Colleen Stakes for 2-year-old fillies on the turf with Sunday being the boys turn in the $60,000 Tyro Stakes.

This Sunday, Monmouth Park will once again host Kortney’s Challenge, a two mile fun run/walk. Proceeds from the event will go to the Kortney Rose Foundation, an organization devoted to raising money to support research related to the treatment and cure of pediatric brain tumors.

The race will begin at 10:00 a.m. at the track’s entrance and will end two miles later in the Grandstand. Runners will also receive free Grandstand parking and admission to the park with registration to Kortney’s Challenge. Participants can register on race day in person starting at 8:30 a.m., or online at www.thekortneyrosefoundation.org.

Nonparticipants can also receive free admission by participating in Food Bank Day and donating a canned food or a non-perishable item. All food donations will go to the Monmouth/Ocean County Food Bank.