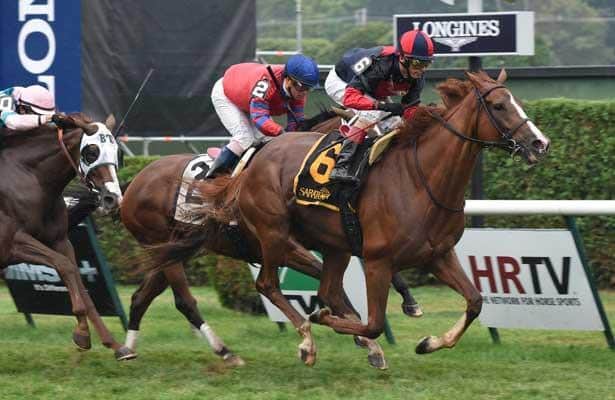 Last summer, two improving sophomores gave excellent showings of themselves at the highest level in the Grade I $1,000,000 Haskell Invitational – Brereton C. Jones’ Albano and Donegal Racing’s Irish You Well – finishing second and fourth, respectively, and separated by a diminishing two lengths. The tactically savvy Albano and late-running Irish You Well – both based at Fair Grounds Race Course & Slots – could meet again next out in the Grade III $125,000 Mineshaft Handicap on Feb. 21.

Albano exits a disappointing third behind Larry Jones-trained stablemate and fellow Mineshaft possible Hard Aces – beaten nearly seven lengths – as the 3-5 chalk in the Listed $75,000 Louisiana Handicap. Students of history and pedigree need not despair, as Albano’s half-brother Mark Valeski lost the Louisiana two years ago en route to an impressive tally in the Mineshaft. Irish You Well, on the other hand, has been off since the Haskell for trainer Wayne Catalano, but has been working extremely well in the mornings. Consistent against some of the best of his generation in 2014, the son of Broken Vow has every right to improve as a 4-year-old.

The proverbial ‘now’ horse in the Jones barn among handicap horses is Dreamchaser Thorobreds’ aforementioned Hard Aces. A son of Jones’ most accomplished male pupil Hard Spun, the 5-year-old bay horse has come into his own in a big way in his last two starts – both at Fair Grounds – including a game second to Frank Fletcher Racing Operations’ Rocket Time in the Tenacious Stakes on Dec. 21 and a resounding victory in the Louisiana by four lengths.

An allowance prep to keep an eye on this week is Sunday’s seventh race, a non-winners of two allowance that could produce a contender for the Mineshaft and features Jim Tafel LLC’s Street Spice, Louis Roussel III’s improving Treasury Bill and yet another Jones trainee in Fox Hill Farm’s slow-developing General Ike.

Perhaps the highest profile member of the locally based handicap division is Winchell Thoroughbreds’ Tapiture, who recently returned to the worktab for the first time since finishing a game second in the Grade I $1,000,000 Breeders’ Cup Dirt Mile at Santa Anita Park. A multiple graded stakes winner, it is unlikely we will see him run at this meet, but a return in the Mar. 28 Grade II $400,000 New Orleans Handicap has not been ruled out.

Another high-profile handicap horse to return to training is Claiborne Farm and Adele Dilschneider’s multiple graded stakes-winning Departing. The 5-year-old gelding is still galloping and has yet to work, which all but precludes him from racing at the meet. It will be interesting if his connections try the son of War Front on grass in 2015 – a surface over which he may be well-suited.

Returning to the worktab in the last 10 days was Brittlyn Stable’s Sunbean, who worked an easy five furlongs on Thursday morning in 1:03 for trainer Ron Faucheux. The son of Brahms is under consideration for the $200,000 Louisiana Premier Night Championship at Delta Downs, which could function as a prep for the Grade II $400,000 New Orleans Handicap on Mar. 28.

Next week we will check in again with Jones and his powerhouse stable, as two Grade I-level runners – Normandy Invasion and Coup de Grace – are expected to start working toward their 2015 seasons.

Charles C. Smith’s String King has been the sovereign of Louisiana-bred turf racing for a few years now, but the aging process during that period seems to have skipped the gelded son of Crowned King. Such youthfulness was on display when the 7-year-old bested seven other rivals in the Grade III $125,000 Col. E. R. Bradley Handicap on Jan. 17 at Fair Grounds Race Course.

Fresh off a track record-setting victory in a swift 1:41.84 over a firm course in the $100,000 Louisiana Champions Day Turf at the same 1 1/16-miles distance, the 15-time winner proved himself in a race in which he had finished fourth and second in the previous two editions. Next up for the Pelican State homebred will be a short break, according to triple-threat owner/trainer/breeder Smith, and a focus on winning the Grade II $400,000 Mervin H. Muniz, Jr. Memorial on Louisiana Derby Day – a race in which the earner of $818,552 finished a game third in 2013.

Finishing a closing third in the Bradley – just missing by a nose for second – and worth watching is Gary and Mary West’s locally based Highball. In the shedrow of Wayne Catalano, the son of Lemon Drop Kid always seems to be late on the scene in his races, but also has been ridden by seven different jockeys in his eight career starts. That being said, it would not be a surprise to see the 4-year-old Kentucky-bred improve vastly if Shaun Bridgmohan retains the ride and begins the bay charge’s rally earlier in the $125,000 Grade III Fair Grounds Handicap on Feb. 21. Highball returned to the tab on Wednesday with a workmanlike four-furlong move in :49.40.

Though not likely to stretch out, one cannot mention impressive turf horses at the New Orleans oval without at least a word about Hugh Roberston-owned and –trained Voodoo Spell. Three-for-three this meet in 5½–furlong races (two of those on grass), the son of Roar of the Tiger has earned impressive speed figures and won with surety over allowance ranks. Said triad of wins also has occurred since meet-leading rider James Graham took over the mount. A true rags-to-riches story, Robertson purchased the gray gelding for $3,500 at Ocala two years ago and the Florida-bred has now earned $115,925 with an impressive record of 7-3-3 from 18 starts.