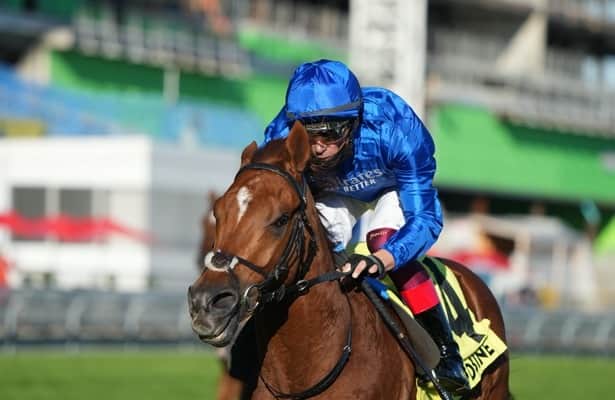 A commanding win Sunday by Albahr completed a dominant weekend at Woodbine for his jockey, trainer, and owner.

Albahr’s win was the third Grade 1 of the Woodbine weekend for jockey Franke Dettori, trainer Charlie Appleby and owner Godolphin. Those connections enjoyed a victory one race prior with Wild Beauty in the Natalma Stakes (G1) and Saturday with Walton Street in the Canadian International (G1).

“It’s been a great weekend,” Alex Merriam, assistant to Appleby, told NBCSN. “… This fellow had some decent form. He’s tough. (Albahr and his stablemates) settled in really well, traveled well, took everything in stride. We were hopeful. They ran up to what we expected, so it’s great.”

Albahr raced eighth of nine early on the Summer Stakes while First Empire went out to the lead. That Mark Casse-trained colt set the early pace of 23.95 and 47.93 seconds while followed by Heat Merchant and Degree of Risk.

Dettori moved his mount forward through the turn and was ready to strike by the top of the stretch. Degree of Risk moved out and bumped Albahr, but the favorite shook off that rival and drove home to a 2 1/4-length win.

Albahr improved to 5: 4-0-1 lifetime. He entered on a three-race winning streak, including a stakes win at Salisbury.