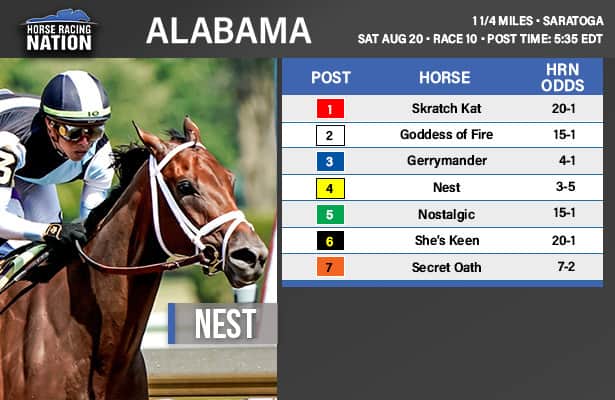 The Alabama features the third matchup between Grade 1 winners Secret Oath and Nest. Secret Oath beat Nest in the Kentucky Oaks by two lengths in May, and then Nest turned the tables on Secret Oath when she won by 12 1/4 lengths in the Coaching Club American Oaks at Saratoga on July 24.

Here is a full-field analysis for the Alabama with morning-line odds provided by the Horse Racing Nation staff. The Alabama is carded as race 10 out of 10 with post time set for 5:35 p.m. ET.

1. Skratch Kat (20-1 – Arrogate – Philip Bauer / Julien Leparoux – 5: 2-1-0 - $124,055) Skratch Kat has a maiden victory at Fair Grounds and then an allowance win at Churchill Downs in a July 1 start. Making her first Grade 1 start against the two best 3-year-old fillies in the country is certainly a daunting task for the daughter of Arrogate. Toss.

2. Goddess of Fire (15-1 – Mineshaft – Todd Pletcher / John Velazquez - 8: 1-4-1 - $248,875) Although Goddess of Fire has only a debut maiden victory at Saratoga last year to her credit, she has four second-place finishes in stakes races, such as the Rachel Alexandra (G2) at Fair Grounds and the Gulfstream Park Oaks (G2). She was a long shot in the Kentucky Oaks when she faded to finish 11th in her only start in a Grade 1. Most recently, Goddess of Fire was second in the Wilton Stakes at Saratoga. The Alabama is clearly a class challenge for this daughter of Mineshaft. Toss.

3. Gerrymander (4-1 – Into Mischief – Chad Brown / Joel Rosario – 6: 3-2-0 - $378,000) Gerrymander became a Grade 1 winner when she was victorious in the Mother Goose by three lengths at Belmont Park in June at odds of 6.50-1. She also won the Tempted at Aqueduct as a juvenile when she defeated Nest and was second in Frizette (G1) behind Echo Zulu. Her only finish outside of the top three was in the Eight Belles (G2) at Churchill Downs on Kentucky Derby weekend. On that day she got banged around at the start and was unable to get to her usual pace-pressing position. Although the Mother Goose was run at 1 1/16 miles, Gerrymander has yet to race around two turns. Use underneath.

4. Nest (3-5 – Curlin – Todd Pletcher / Irad Ortiz Jr. – 8: 5-2-1 - $1,405,550) Nest has yet to run a bad race in her eight starts with five wins, including the Coaching Club American Oaks (G1) at Saratoga last month and the Ashland (G1) at Keeneland during the spring meeting. Sandwiched between those Grade 1 victories are a pair of outstanding second-place finishes. The daughter of Curlin ran behind Secret Oath in the Kentucky Oaks (G1) and then was beaten by only Mo Donegal in the Belmont Stakes (G1). That Triple Crown performance was the best of her career until the CCA Oaks, when the Todd Pletcher runner beat her rival Secret Oath by more than 12 lengths with an effortless front-running effort. Top choice.

5. Nostalgic (15-1 – Medaglia d’Oro – Bill Mott / Jose Ortiz – 7: 3-0-1 - $307,900) Nostalgic won the Gazelle (G3) at Aqueduct in April for Bill Mott and Godolphin. She stepped into Grade 1 company from that victory to face Nest and Secret Oath in the Kentucky Oaks and the CCA Oaks. In Kentucky, she had a poor trip and finished 10th, but in New York she was third behind the aforementioned rivals. The stretch to 10 furlongs should not be a problem for the daughter of Medaglia d’Oro compared with the class challenge of this Grade 1 field. Use underneath.

6. She’s Keen (20-1 – Keen Ice – George Arnold II / Jose Lezcano – 5: 1-0-1 - $80,600) She’s Keen broke her maiden in her fifth try on July 28 at Saratoga with a front-end performance going 1 1/8 miles. The daughter of Keen Ice began her career in April at Keeneland and then ran three times at Churchill Downs. She is owned by Calumet Farm, which frequently has long-shot entries in Grade 1 stakes across the country. Toss.

7. Secret Oath (7-2 – Arrogate – D. Wayne Lukas / Luis Saez – 10: 5-1-2 - $1,494,417) Hall of Fame trainer D. Wayne Lukas always has challenged his best horses against the toughest competition, and that has certainly been true with Secret Oath. She has three wins this year, including the Kentucky Oaks to go with a third against the boys in the Arkansas Derby (G1) and then a fourth in the Preakness (G1). Back in competition against 3-year-old fillies, she was overwhelmed by the eye-catching performance of Nest in the CCA Oaks. Win contender.

Summary: The Alabama features the third matchup between Secret Oath and Nest, the top two 3-year-old fillies in the country. They are both $1.4 million earners, and each has a pair of Grade 1 victories in their past performances. Head-to-head the fillies have a win and a second that came in the Kentucky Oaks and then the CCA Oaks. That makes those fillies very hard to separate.

Based on recency, Nest has to have the advantage after her runaway victory in the CCA Oaks and the second-place finish in the Belmont Stakes going 12 furlongs.