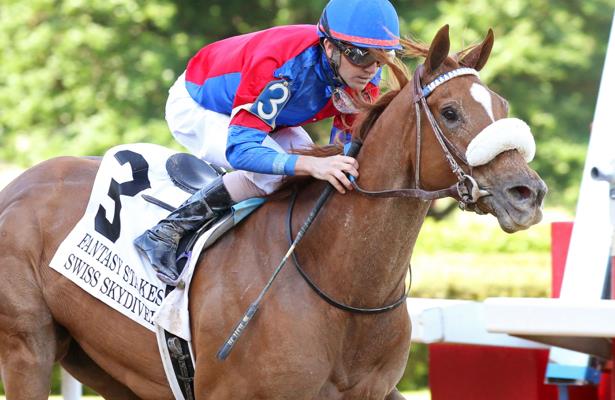 One week after Tiz the Law dominated Saratoga’s Travers Stakes, 3-year-old fillies will take the same 1¼-mile trip around the Spa on Saturday in the Grade 1, $500,000 Alabama.

Swiss Skydiver, purchased for a modest $35,000 two years ago, will try to make the Alabama her fourth graded stakes win of 2020. She’s won her last three races against female competition and is the even money favorite Saturday.

Trainer Kenny McPeek is looking for his second Alabama victory in three years. He took the race’s 2018 edition with Eskimo Kisses and saddles Swiss Skydiver off a strong second-place showing July 11 against males in Keeneland’s Blue Grass Stakes (G2).

"The further she goes, the stronger she gets,” McPeek said. “She's been a real sturdy filly. She eats really well and she's easy to be around. The Alabama is a great race. It's a race I've won before and I would love to win it again."

Seven sophomore fillies are entered for the 140th running of the Alabama, which offers its winner a Breeders’ Cup Distaff “Win and You’re In” berth.

Here’s a look at the field:

TimeformUS’ pace projections show Swiss Skydiver as likely to go right out to the lead Saturday. Last out, she led at the four- and six-furlong calls of the Blue Grass before winner Art Collector got by her.

Crystal Ball, second-place finisher over the same Saratoga course July 18 in the Coaching Club American Oaks (G1), could go up and press the pace.

Check out free PPs from our friends at Brisnet for more information on the Alabama’s runners.

Breeders’ Cup broadcasting partner NBC will bring live coverage of the Alabama, which is scheduled for a post time of 5:43 p.m. EDT. The network will also show the $500,000 Saratoga Derby Invitational, with a 5:07 p.m. post time.

Saratoga Live, a production of Fox Sports and the New York Racing Association, will also broadcast Saturday from the Spa. For a full schedule of Saratoga Live, see https://www.nyra.com/saratoga/racing/tv-schedule.

Speaking of the Alabama’s distance, Reinier Macatangay notes that Harvey’s Lil Goil – by American Pharoah out of a Tapit mare – also has the breeding to go far.

Juddmonte Farms has 3-year-old fillies ready to go in Saturday’s Alabama and Sunday in the $500,000 Saratoga Oaks Invitational. Juddmonte general manager Garrett O'Rourke said Bonny South will need a good pace up front to contend for the win.

The Alabama is one of four Breeders’ Cup “Win and You’re In” races on tap between Saturday and Thursday. Take a look at the four fillies and mares who’ve clinched Distaff berths this summer.

First post Saturday is 1:10 p.m., with full Saratoga entries available via HRN. Here’s a look at the card’s other stakes race, the Saratoga Derby Invitational, courtesy of the NTRA:

Decorated Invader, who already has registered a graded stakes win over Saratoga Race Course's turf this meet, will put his undefeated sophomore record on the line in a return engagement headlining the second running of the $500,000 Saratoga Derby Invitational. The Saratoga Derby was initiated last year as part of the New York Racing Association's Turf Triple series to showcase the country's best 3-year-old turf runners. Decorated Invader is 3-for-3 in 2020, starting with a 1 ¼-length score in the one-mile Cutler Bay in March at Gulfstream Park before romping a six-horse field by 4 ¾-lengths in the Pennine Ridge (G2), also at one mile, on June 20. Returning to historic Saratoga, Decorated Invader won the Grade 2 Hall of Fame on July 18.

Peter Callahan's Swiss Skydiver has established herself as one of the leading 3-year-old fillies in the country. On Saturday, she will attempt to build on her form in the 140th running of the Grade 1, $500,000 Alabama going 1¼-miles over the main track at Saratoga Race Course.

The prestigious event for sophomore fillies honors horse owner William Cottrell, who was too modest to have a race named after himself and requested that instead it be named after his home state of Alabama. As one of the oldest American stakes races for females, the historic test has seen many notable winners over the years, including Hall of Famers Miss Woodford (1883), Beldame (1904), Top Flight (1932), Tempted (1958), Gamely (1967), Mom's Command (1985), Go for Wand (1990), Sky Beauty (1993), Heavenly Prize (1994), Silverbulletday (1999) and Royal Delta (2011).

Trained by Kenny McPeek, who saddled Eskimo Kisses to a win in the 2018 edition, Swiss Skydiver arrives at the Alabama off a runner-up finish against colts in the Blue Grass (G2) on July 11 at Keeneland, where she finished a game second to Art Collector.

This season, the daughter of second crop sire Daredevil has put together a ledger which includes three graded stakes triumphs over three different tracks, taking the Gulfstream Park Oaks (G2) on March 28, the Fantasy (G3) on May 1 at Oaklawn Park and the Santa Anita Oaks (G2) on June 6.

"Once we got her going to two turns, she really figured it out and it clicked," McPeek said. "The further she goes, the stronger she gets. She's been a real sturdy filly. She eats really well and she's easy to be around. The Alabama is a great race. It's a race I've won before and I would love to win it again."

Swiss Skydiver was purchased for $35,000 by McPeek at the 2018 Keeneland September Yearling Sale, from the Select Sales consignment. She is out of the Johannesburg broodmare Expo Gold.

With a record of 8-4-2-1, Swiss Skydiver is the most seasoned filly in the field and boasts the highest amount of lifetime earnings with $677,980.

Jockey Tyler Gaffalione, who piloted Paris Lights to a Coaching Club American Oaks (G1) win July 18, will attempt to sweep both two-turn Grade 1 events for 3-year-old fillies at Saratoga as he climbs aboard Swiss Skydiver from post 5.

The dark bay daughter of Uncle Mo is still in search of her first career stakes win, but acquired Grade 1 black type last out with a third-place finish to Speech in the Ashland (G1) on July 11 at Keeneland.

Third time was the charm for Envoutante, who broke her maiden going 1 1/16 miles at Gulfstream Park on April 2 and defeated winners two starts later going the same distance at Churchill Downs.

"This filly is sitting on her biggest race," McPeek said. "She's a filly that has done everything right and we have been pointing to this race for a while. I think the mile and a quarter will hit her right on the head. It's unfortunate that I've got to run them against each other, but she's going to run well."

Jockey Jose Ortiz will attempt his fourth straight victory in the Alabama when piloting Envoutante from post 1.

McPeek said a strong run from both fillies would likely result in a start in the Kentucky Oaks on Sept. 4 at Churchill Downs. The Alabama offers 100-40-20-10 qualifying points to the top-four finishers.

"We're still pointing both of them to the Oaks. The timing is a bit tricky this year, but it is what it is," McPeek said.

A week after sending out Gamine to a monstrous triumph in the Test (G1), Hall of Fame Bob Baffert will seek another Grade 1 win at the Spa with Crystal Ball, who breaks from post 3.

Owned by WinStar Stablemates, the bay daughter of Malibu Moon made a big jump up in class last out when finishing a game second to Paris Lights in the Coaching Club American Oaks off a 6¼-length maiden victory.

Purchased for $750,000 as a 2-year-old from the Fasig-Tipton Florida Select Sale in March 2019, Crystal Ball is out of the Giant's Causeway broodmare Déjà Vu, who is a half-sister to Grade 1 winners Madcap Escapade and Dubai Escapade.

Crystal Ball will be ridden by Hall of Famer Javier Castellano, a three-time Alabama winner.

Harvey's Lil Goil will look to give Hall of Fame trainer Bill Mott his fourth Alabama win when she seeks to become a graded stakes winner on both dirt and turf.

Owned by the Estate of Harvey A. Clarke and Paul Braverman, Harvey's Lil Goil won the Regret (G3) on June 27 over the turf at Churchill Downs in her most recent effort and took the Busanda over the main track at Aqueduct two starts prior.

Harvey's Lil Goil will attempt to give her 2015 Triple Crown-winning second crop sire American Pharoah his first Grade 1 win as a stallion and is out of the Tapit broodmare Gloria S. - a half-sister to 2012 Kentucky Derby and Preakness winner I'll Have Another.

Harvey's Lil Goil will leave from post 6 under Junior Alvarado.

Robert and Lawana Low's Spice Is Nice makes her Grade 1 debut in the Alabama for trainer Todd Pletcher, who trained Princess of Sylmar (2013) and Stopchargingmaria (2014) to Alabama victories.

The well-bred chestnut daughter of Curlin out of the Grade 1-winning Bernardini mare Dame Dorothy won a first level allowance optional claiming event on July 3 going a one-turn mile-and-a-sixteenth at Belmont Park last out. Spice Is Nice made a dazzling career debut when besting a field of maidens by a dozen lengths at Gulfstream Park en route to a runner-up finish in the Davona Dale (G2) at the South Florida oval.

Hall of Fame jockey John Velazquez, a three-time winner of the Alabama, will pilot Spice Is Nice from post 2.

Juddmonte Farms' Bonny South will attempt to add a second graded stakes victory to her resume for trainer Brad Cox.

The chestnut Munnings filly won the Fair Grounds Oaks (G2) on March 21 before a distant fourth in the Ashland.

Rounding out the field is Susan Moulton's Fire Coral for Hall of Fame trainer Steve Asmussen. The daughter of Curlin broke her maiden at second asking Jan. 31 at Oaklawn Park en route to a 3½-length score against allowance optional claiming company at the Arkansas oval.

Jockey Ricardo Santana, Jr. was aboard both of Fire Coral's career wins and will be back aboard from post 7.