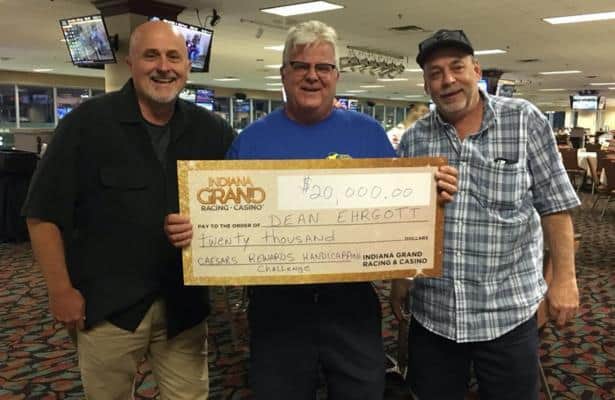 For Ehrgott, it wasn’t so much feeling as if he were awaiting the result of a tight photo finish, but more like sweating out a protracted stewards’ inquiry before the 59-year-old married father of four was declared the narrow victor of the first ever Caesars Rewards Handicapping Challenge last June.

That unique competition was conducted throughout four Caesars-owned racetracks: Indiana Grand Racing and Casino, where Ehrgott played, Harrah’s Louisiana Downs and the harness tracks Harrah’s Hoosier Park and Harrah’s Philadelphia. Contestants were required to play races at all four tracks.

After Ehrgott pretty much led throughout the tournament, the initial posting of the final scores had him dropping to third. Only the winner qualified for Las Vegas, along with a $20,000 first-place check.
However, a delay apparently occurred in communicating results among the four tracks, and Ehrgott’s last-second replacement pick for the late scratch of his selection in the contest’s finale hadn’t registered throughout the competition. Two hours later, the audited results determined that Ehrgott had made his change in time to second-place finisher Chief Red Bull. That $3.40 place price gave Ehrgott the victory, $129.00 to $128.60 for Paul Napoli, who was playing in Philadelphia.
“When the race was over, they actually showed me being in third place,” said Ehrgott, who lives 10 miles southwest of downtown Indianapolis in Camby, Ind., and owned harness horses for many years. “I went to the computer and put my NHC Tour card in and it showed I had ($3.40) more. I said, ‘Something’s weird here. I don’t understand. They’re showing me third, but I think I actually won the thing.’
“When I was racing horses, there is no feeling like winning a horse race, whether you’re running for $2,000 or $200,000. But for a handicapping tournament, to win it in such an unusual way, that was quite exciting. We were on Cloud Nine.”
The former air traffic controller really would be flying high should he win the NHC. Ehrgott would receive not only the NHC’s $800,000 first-place prize but a $1 million bonus as the Caesars Challenge winner.
Ehrgott, who also works in real estate and owns rental properties, is a first-time NHC qualifier. He credits in part his pal Greg Gass, a regular contest participant and past NHC qualifier, for helping him better analyze some of the thoroughbred races.
“Greg’s specialty is Thoroughbreds and mine is harness horses,” Ehrgott said. “That’s really the reason I won the tournament. Because they had a Thoroughbred/harness tournament, and the horses who paid the most were the harness horses. Luckily I was able to have a couple of the long shots. I was in the lead from about the moment the thing started up until the last race when I thought I came in third.”
Ehrgott grew up in Indianapolis, but his parents took him to Churchill Downs long before horse racing came to Indiana. He got into ownership when his job as an air traffic controller sent Ehrgott from California back to Indiana and one of his colleagues, who trained Standardbreds on the side at the state fair grounds, asked if he’d ever thought about owning a horse. As a matter of fact, Ehrgott had, and the men were partners for more than two decades before the trainer became very ill in 2016.
Their best horse was a mare named Radar Contact -- a shout-out to their profession -- who earned almost $1 million and won 34 races.
“We had a couple of races we won in the $300,000 range,” Ehrgott said. “That was obviously a heck of a thrill. But we expected to win them, because the horse was so, so good. But honestly, I don’t spend that much time at handicapping tournaments. So winning that was a shock and a thrill that came pretty close to equaling one of the races of my horse-racing career.
“If I’d win the bonus on top of the actual winnings -- other than maybe having my children -- that would be a feeling I’d never be able to duplicate.”
Asked what is more stressful, coordinating the movement of aircraft or playing handicapping contests, Ehrgott said with a laugh, “Betting horses in a tournament is much more stressful. When you’re in contention, there are a lot of thoughts running through your head. Especially when you’re down to the last few races, you have to determine not only what horse you think has a chance of making money, but you have to make sure that horse, if you choose it, can get you in position to win. A lot of times when it comes down to the last race, you’re not really selecting the horse you like. You’re selecting your second or third choice, because that’s the horse you need to win the tournament or at least finish in the money.
“You can’t second guess yourself in air traffic, because if you do, it will keep you up at night. You have to be very comfortable with your decision-making process. I would say betting horses is the same thing. After a horse race and your horse doesn’t win, it’s very easy to second-guess yourself. But a lot of times, when I make a decision on a horse, they may not win but I really feel like sometimes that horse was the best but racing luck cost you the race.”