Ain't No Other Heads California Flag 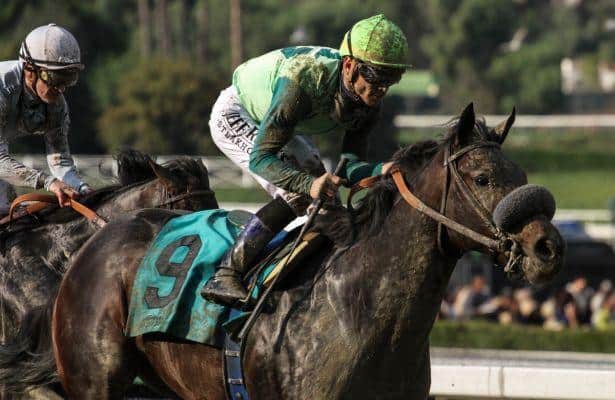 Hard knocking Ain’t No Other heads a wide open field of 10 California-breds in Saturday’s inaugural running of the $100,000 California Flag Handicap, to be run at about 6 ½ furlongs down Santa Anita’s unique hillside turf course.

A winner of the $100,000 Sensational Star Stakes down the hill Feb. 24, Ain’t No Other will be reunited with leading rider Rafael Bejarano on Saturday as he seeks his 10th career win and his second triumph down the hill.

Drawn well in post position seven, the 5-year-old Tommy Town Thoroughbreds, LLC, homebred gelding by Old Topper will likely try to sit a stalking trip as he did with Bejarano in the Sensational Star.  Ain’t No Other comes off a hard-fought second place finish in the $105,000 Pirate’s Bounty Stakes at Del Mar.

Hollendorfer will also send out Atta Boy Pete, who comes off a front-running allowance win going five furlongs on the Del Mar turf Aug. 29—his lone start of the year and his first-ever on grass.  A 4-year-old gelding by Perfect Mandate, he’ll try the hill for the first time Saturday and will be ridden back by Julien Leparoux.

Third, beaten a neck, in Del Mar’s $100,000, five furlong turf Green Flash handicap Aug. 14, Strong Wind was subsequently moved up to second by disqualification and missed by the same margin over the course on Aug. 29 when second at odds of 3-5.

Trained by Mark Glatt, Strong Wind will be ridden for the fifth time in-a-row by Gary Stevens, who won a first condition allowance on him going five furlongs on turf Aug. 1.  A 3-year-old colt by Tribal Rule, Strong Wind will try the hillside course for the first time.

Trainer Marty Jones will be well represented in the California Flag by 5-year-old gelding Dixieland Blues, who broke his maiden down the hillside turf and has two seconds and a third place finish from six hillside tries.  He comes off a nice late-running allowance victory going five furlongs on turf Aug. 25.

A winner of two of his last three starts, all with the now inactive Garrett Gomez, Dixieland Blues will stretch back out in the California Flag and will add Alex Bisono for the first time.

A winner of the $75,000 Governor Cup Handicap, at Barretts Race Meet at Fairplex going six and a half furlongs Sept. 18, Luckarack will once again contest the downhill turf course for a third time Saturday.

Claimed by Mike Pender on Aug. 3, the 5-year-old gelding has won two of his last three starts. Luckarack has three wins and two seconds from seven lifetime starts on the turf and will be ridden by Martin Pedroza for the first time.

A program scratch out of Monday’s ninth race, Tiz a Minister will start from the rail on Saturday. The Paul Aguirre trained 3-year-old colt hasn’t run on turf since January and will try the downhill turf course for the very first time in the California Flag. Third in the El Cajon Stakes at Del Mar on Aug. 30, Tiz a Minister will try the shorter distance after having run routes most of the past year.

Ridden by Corey Nakatani in his last five starts, Martin Garcia will pick up the mount for the first time Saturday. Based at Betfair Hollywood, he has a series of sharp drills, with the most recent being a four furlong work in 49.40 on Oct. 14.

Fifth in the City of Hope Mile on Oct. 5, Starspangled Heat will shorten back up to six and a half furlongs for the first time since April. Trained by Barry Abrams, the 5-year-old gelding by Unusual Heat has two wins, three seconds and five thirds from this downhill course. His most recent drill was a three furlong bullet work on Santa Anita’s main track in 34.80 Oct. 15. He will be reunited with Corey Nakatani in the California Flag.

Owned by Madeline Auerbach LLC or Vincenzo Loverso, Starspangled Heat has an overall mark of 28-4-4-9, with earnings of $340, 142.

» Horse: A Toast to You
» Horse: Circa'sgoldengear