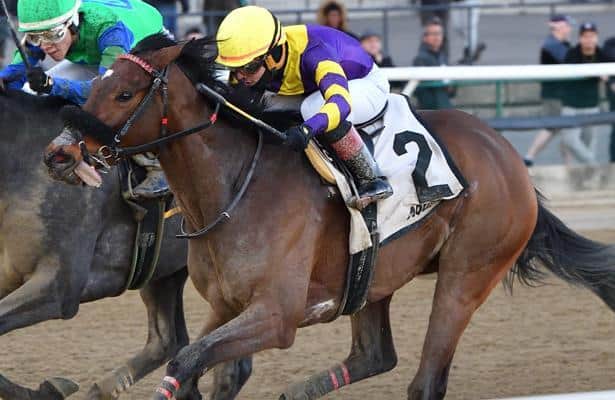 Perrine Time Thoroughbreds' Kansas Kis, who earned 20 Kentucky Oaks qualifying points for her runner-up effort in the Busher Invitational on March 7 at Aqueduct, will return to action in the Grade 3, $400,000 Fantasy on Friday at Oaklawn Park.

Kansas Kis is trained by Ray Handal, who oversees a bustling stable of 30 horses at Belmont Park. The Kentucky-bred daughter of Constitution posted a five-furlong breeze in 1:02.78 on Saturday on the Belmont training track.

"It was a nice little cruise around, and she galloped out nicely," Handal said. "She's an aggressive filly and gets a lot out of her training. We're just trying to keep her happy with that workout today."

Sporting a record of 1-3-2 from seven starts and purse earnings of $141,650, Kansas Kis graduated in a Jan. 23 maiden tilt at Aqueduct and followed up with a strong second to Ilchester Cheetah in a Feb. 21 allowance sprint.

Kansas Kis made a memorable stakes debut in the Busher Invitational, in which she opened up a 3 1/2-length lead at the top of the stretch but was collared in the final stride by Water White.

Handal said the Busher effort, when stretching out to a mile for the first time, confirmed his confidence in the filly purchased for $57,000 at the April OBS Two-Year-Olds in Training Sale.

"She really showed everybody that she's the type of horse I thought she was in the Busher," Handal said. "She ran a fast-closing second in the allowance to Jerry O'Dwyer's filly (Ilchester Cheetah), and I knew the way she galloped out that she would get better with distance.

"She's steadily improved in each start and I think she'll continue to do so. She just turned 3 (Saturday). She's still growing into herself and the time off has done her wonders. I think she's going to make a lot of noise down there and run a big race."

Kansas Kis will exit post 6 under Florent Geroux in the Fantasy.