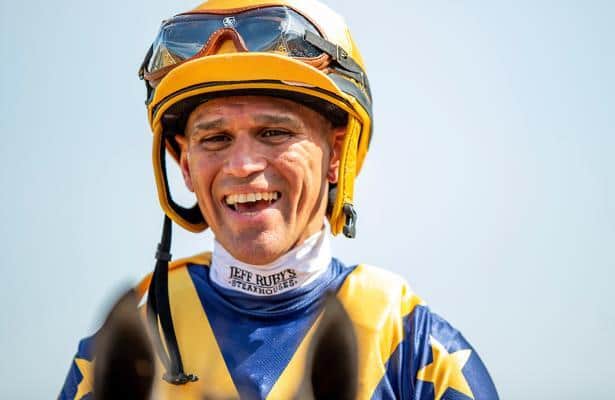 In the first diagnosis made public for a big-name American jockey, Hall of Famer Javier Castellano has tested positive for COVID-19, his agent announced Thursday.

John Panagot said in a post to his Twitter account Castellano was tested on Tuesday after Gulfstream Park mandated he take a physical. The results returned Thursday morning.

"Javier is asymptomatic and feels fine and healthy," Panagot said. "He jogged three miles Wednesday and looked forward to the weekend."

Castellano was scheduled to ride Todd Pletcher-trained Candy Tycoon in the Florida Derby (G1) and Spice is Nice in the Gulfstream Park Oaks (G2), plus had the mount on returning 4-year-olds Vekoma in the Sir Shackleton and Newspaperofrecord in the Sand Springs Stakes among other assignments this week.

Instead of riding, Panagot said Castellano will self isolate until he's medically cleared.

1/2- After being in New York with my family last week, I was asked by Gulfstream to come early to Florida to get tested for the virus. I was asymptomatic all along. Unfortunately the test came back last night as positive. I am otherwise healthy but will follow the doctors...

2/2- orders to quarantine for the next 2 weeks. I have had no known contact with anyone that has tested positive. I appreciate the support from everyone including Gulfstream Park. Stay safe everyone and we will all get through this God willing ??

Castellano last rode in the afternoon on March 15. That's also the most recent time, according to a track statement, he was at Gulfstream Park.

"We have been operating in full compliance with all executive orders issued by the state of Florida and have, in fact, initiated stringent measures for the protection of all of our essential personnel, including our jockeys," the statement reads. "It is because of our strict protocols requiring all jockeys to be screened prior to entering the facility that Javier’s symptoms were recognized and he was able to be tested for which we know he is thankful.

"...Javier will not be able to return to riding at Gulfstream Park until after his mandatory 14-day quarantine is complete and he has received a clean bill of health from his medical practitioner. We wish him a speedy and complete recovery.”

Jockey Irad Ortiz Jr., the two-time reigning Eclipse Award winner, has taken off during the health crisis for precautionary reasons, while Rajiv Maragh, also based at Gulfstream, has been in and out of action, vocal about safety protocols at the track. Last Friday, Gulfstream took a day off from racing before returning Saturday with new restrictions including access to the jockeys' room.

Other major tracks still operating include Santa Anita Park and Golden Gate Fields in California, as well as Oaklawn Park in Arkansas.

Oaklawn continued on after hosting NFL head coach Sean Payton earlier this month; Payton, who presented the trophy after a March 14 stakes race, tested positive for COVID-19 days later. Castellano was also at Oaklawn that day.