Against boys, Moira is favored to win 163rd Queen’s Plate 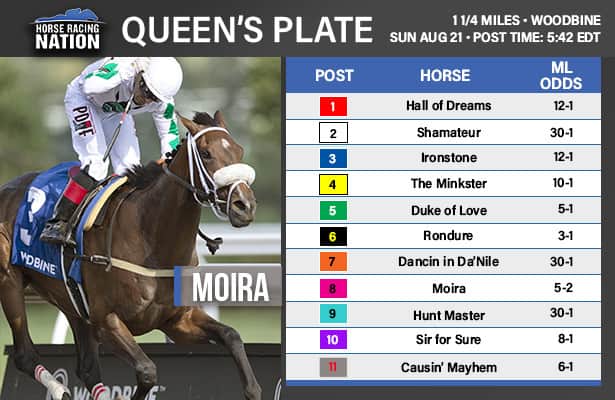 Woodbine Oaks winner Moira, who has raced in nothing but stakes and won three of them, was drawn into post 8 and made the 5-2 morning-line favorite for the 163rd running of the US$773,650 Queen’s Plate Stakes on Sunday.

Eleven 3-year-olds were drawn into the 1 1/4-mile classic, which annually is Canada’s biggest horse race. It will be run on the Tapeta synthetic surface at Woodbine.

Trained by Kevin Attard, the filly by Ghostzapper will try to become the race’s fifth female winner in the last 12 years. Rafael Hernández will have the ride on Moira, who was bought as a yearling for $150,000 by X-Men Racing, Madaket Stables and SF Racing.

Rondure, an Oxbow colt who won the Marine Stakes (G3) last month at Woodbine, drew post 6 and was made the 3-1 second choice. Flavien Prat will ride him for trainer Katarina Vassilieva.

Possible pacesetter Duke of Love will start from post 5 carrying morning-line odds of 5-1. The Cupid colt trained by Josie Carroll is an allowance winner who most recently finished a troubled fourth in the Plate Trial last month at Woodbine.

Canada’s Triple Crown series continues Tuesday, Sept. 13, with the Prince of Wales Stakes, a 1 3/16-mile race on the dirt track at Fort Erie. It concludes Sunday, Oct. 2, with the Breeders’ Stakes, a 1 1/2-mile turf race at Woodbine.

Because the three races are restricted to horses bred in Canada, they are not graded stakes.

The Queen’s Plate, scheduled for Sunday at 5:42 p.m. EDT, is billed as the longest continuously run stakes race in North America. Environment Canada predicted a mix of sun and clouds with a 40 percent chance of showers and a high of 82 degrees.

Horse Racing Nation’s coverage of the Queen’s Plate is made possible with a sponsorship by Woodbine.