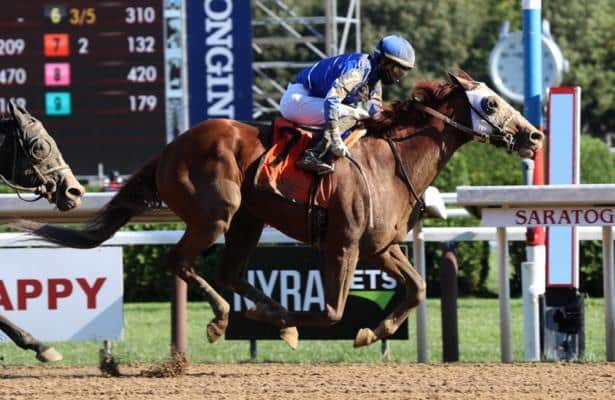 Mystic Guide’s connections chose to bypass last month’s Breeders’ Cup Classic and instead focus on the colt’s 4-year-old season. They now have an ambitious spot in mind for his 2021 debut.

Mystic Guide last ran Oct. 10 at Belmont Park in the Jockey Club Gold Cup (G1). He briefly led in the late stages of that 1¼-mile race before finishing ¾ of a length shy of fellow 3-year-old Happy Saver.

Prior to the Jockey Club Gold Cup, Mystic Guide was third July 16 at Saratoga in the Peter Pan Stakes (G3) before making the grade Sept. 5 at the Spa in the Jim Dandy (G2). For his career, the Godolphin homebred is 6: 2-2-2 with nearly $200,000 in earnings.

Rather than face the likes of Authentic, Improbable, Maximum Security, Tiz the Law and Tom’s d’Etat in the Breeders’ Cup, Stidham opted for several weeks of light training with 2021 in mind.

“We felt like we had picked his spots carefully,” Stidham said. “We’d been real patient with him throughout his 3-year-old year. We felt like focusing on next year was probably the best route to go.

“There was no reason to run him in the Breeders’ Cup when he really wasn’t probably at that level yet. Hopefully, he will be for next year’s Breeders’ Cup.”

Mystic Guide, who is out of the Grade 1 winner Music Note, returned to the official work tab Tuesday at the Fair Grounds, breezing four furlongs in :48.40. Stidham called the move “an easy maintenance work.”

If Mystic Guide runs in the Pegasus, he figures to face a challenging field.

Connections of multiple Grade 1 winners Code of Honor and Tiz the Law have confirmed they are targeting the Pegasus. Newly minted Grade 1 hero Bodexpress and Breeders’ Cup Dirt Mile runner-up Jesus’ Team are both based in South Florida and will likely aim for Gulfstream's signature event.

“He’s certainly going to have to continue improving and getting better and faster as next year goes on,” Stidham said of Mystic Guide. “I see no reason why he won’t. I think he’s a very talented horse. We’ve been real patient with him and hopefully, that’s going to pay off.”

Stidham also provided updates on some of the other standouts in his barn.

Princess Grace is Stidham’s most recent graded stakes winner, having scored in Churchill Downs’ Mrs. Revere Stakes (G2) on Nov. 14. Stidham said the 3-year-old Karakontie filly will enjoy some time off before returning in the spring.

Alms, a 3-year-old City Zip filly, is back in training with an early spring return in mind. The two-time Grade 3 winner was third most recently at Keeneland in July’s Appalachian Stakes (G2).

Another 3-year-old by City Zip, colt Pixelate, is training at the Fair Grounds and targeting that track’s $75,000 Woodchopper Stakes on Dec. 26. He won the Del Mar Derby (G2) on Sept. 6 but has been off the board in two starts since.