After 'scramble' return from Dubai, Tacitus set for Oaklawn Handicap 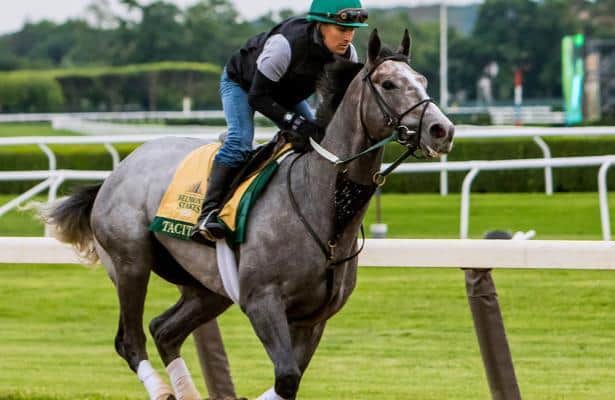 A homebred for famed Juddmonte Farms, Inc., Tacitus is the 9-2 second choice in the program for the Grade 2, $600,000 Oaklawn Handicap for older horses Saturday at Oaklawn Park.

A royally bred 4-year-old gray son of Tapit, Tacitus will be making his first start since finishing fifth in the world’s richest race, the inaugural $20 million Saudi Cup on Feb. 29 in Saudi Arabia.

Tacitus remained in the Middle East and was shipped to the United Arab Emirates for the Dubai World Cup (G1) on March 30, but the race was canceled due to the COVID-19 pandemic.

“We kind of had to scramble to get the horse back here to the States,” Hall of Fame trainer Bill Mott’s son and traveling assistant, Riley Mott, said during training hours Friday morning. “We had to really scramble to find a flight back for the horse because everything was shut down, kind of mayhem.

“Finally got the horse back to New Jersey. They were able to fly him there in late March.”

Following a brief quarantine period, Mott said Tacitus joined his father’s string at Belmont Park in New York and resumed training. The menu is lean on immediate options during the COVID-19 era.

“Obviously, the horse is like geared up, ready to run in Dubai,” Mott said. “Had to come home. Didn’t really know what to point for, as is the case for everybody. We just said if we can put in like two or three good works in New York, we could maybe have him ready to come here.”

After breezing five furlongs in 1:04.19 on April 27 over Belmont’s training track, Mott said Tacitus was flown Tuesday to Arkansas for the Oaklawn Handicap, a race his famous father won in 1995 with future Horse of the Year Cigar and again in 1996 with Geri.

“Never what we had planned on running in, but I’m sure that’s the case for half the field,” Riley Mott said.

The consistent Tacitus (first, second or third in eight of 10 career starts) has bankrolled $2,677,500. His resume includes victories in the Tampa Bay Derby (G2) at Tampa Bay Downs and the Wood Memorial (G2) at Aqueduct and a third-place finish in the Jockey Club Gold Cup (G1) last September at Belmont to conclude his 3-year-old campaign.

Tacitus is out of champion Close Hatches, who was also campaigned by Juddmonte and Mott, Oaklawn’s leading trainer in 1986. Mott saddled Close Hatches to victories in Oaklawn’s Azeri Stakes (G2) and Apple Blossom Handicap (G1) in 2014 en route to an Eclipse Award as the country’s Champion Older Dirt Female.

“Similar in that they’re kind of scopey, elegant-looking horses,” Riley Mott said of Close Hatches and Tacitus. “They’ve probably got a little bit of the same demeanor. That’s good. She was a champion. I think he took a little bit of his mother and a little bit of his dad in Tapit. He’s got a lot Tapit in him. He’s been a fun horse to train.”