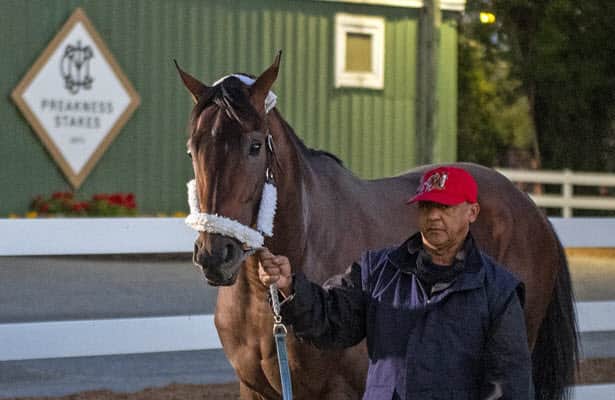 Simplification’s connections were the first to unequivocally commit to the Preakness Stakes after the colt’s fourth-place finish in the Kentucky Derby, a reflection of how optimistic they are about their prospects in the middle jewel of the Triple Crown.

Trainer Antonio Sano and owner Tami Bobo are raving about how well their ultra-consistent horse came out of his solid Derby effort while expressing confidence that he can contend in the Preakness.

“He was walking like nothing happened. It was just another training day for him,” Sano said during an interview in which his son, Alessandro, served as interpreter.

Sano added, “The horse wasn’t freaking out. He wasn’t dead tired. He was calm, focused.”

Bobo, who owns the horse with Tristan De Meric, described the 3-year-old’s post-Derby condition as “amazing.” The winner of the Fountain of Youth Stakes (G2) got pinched back at the start of the 1 1/4-mile classic. He and Jose Ortiz, his unflappable jockey, did well to make up significant ground with a rally good enough for fourth.

Once he returned to the barn, Simplification gave every sign he can handle the quick two-week turnaround with ease. “The horse was happy and on his toes and proud of himself,” Bobo said. “In his mind, he won that race.”

Bobo could not be more excited about her Florida-bred’s chances. “If I could pick the perfect race for this horse,” she said, “I’d pick the distance of the Preakness. It’s ideal.”

Sano wished the Derby, won by 80-1 Rich Strike to make him the second-longest shot to bring home the roses, had unfolded differently.

Sano ranks as the winningest trainer in the history of Venezuela. He was kidnapped twice in his native land, leading him and his family to flee to the U.S to start anew in 2010. One of the keys to his success has been his ability to give young horses a strong foundation that leads to future success.

In an era when many trainers believe less is more in handling elite runners, Alessandro describes his father as “old school.” That is part of what drew Bobo to him.

“Antonio has not lightened the load on this horse from Day One,” she said. “This horse has been trained and trained hard, and he takes the training. He’s a sound horse and he’s a hearty horse. He loves his job. The more you throw at him, the harder he tries.”

Simplification has raced every month except December since his Oct. 1 debut at Gulfstream Park. He used December to prepare for what would be a four-length victory in the Jan. 1 Mucho Macho Man. He had not finished worse than third in six consecutive races leading to the first Saturday in May, including a third-place effort in the April 2 Florida Derby (G1).

Bobo emphasized that she and Sano are paying close attention to what Simplification is telling them.

“He has not had a breather and he’s continued to show this is what he wants,” she said. “This horse is dictating his path.”