After big upset, could Maracuja be back in Alabama? 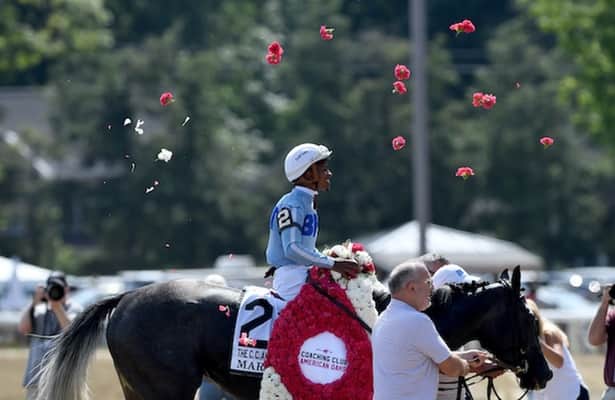 The flower blanket outside of trainer Rob Atras’ barn Sunday morning served as a welcome reminder of what Maracuja accomplished a day prior, when the sophomore filly outdueled 1-5 favorite Malathaat in deep stretch to win the Grade 1, $500,000 Coaching Club American Oaks at Saratoga.

Beach Haven Thoroughbreds’ Maracuja earned a 96 Beyer Speed Figure for her first stakes win, which came when she was the longest shot on the board in the four-horse field at 14-1. It also marked the first career Grade 1 win for Atras, who has been on his own as a trainer since 2009 – and she could aim for the Alabama (G1) for her next start.

Atras said the races earlier on Saturday’s card kept him from thinking too much about the CCA Oaks.

“I was busy the first couple of races; we were looking at a couple of horses to claim, so it kind of kept my mind off it,” Atras said. “I didn’t get too much time to get worked up. But it’s unbelievable; in Saratoga to win a Grade 1. I had so many messages from friends and well-wishers after the race. It felt like everyone was watching.”

Since running second in her debut in December at Aqueduct, Maracuja has finished on the board in four of her five starts in her 3-year-old campaign, including a maiden-breaking win at third asking in February at Aqueduct and a second-place effort going 1 1/8 miles in the Gazelle (G3) in April at the Ozone Park-based track.

After taking the step up in class in a seventh-place Kentucky Oaks finish, Maracuja handled the competition that included Kentucky Oaks winner Malathaat in a race that traditionally attracts the top talent in the division.

“She’s just developed and every race, it seems like she’s moving forward,” Atras said. “Her first couple of races, she was a bit green. After she got her wind, she really just blossomed. She’s come a long way in a short time. I was really proud of her and really impressed how she bore down and got up like that in the end. To run against a filly as accomplished as Malathaat, it was incredible, really.”

“If she continues to come out of the race good then I definitely would like to consider that race,” Atras said. “She ate everything up and cooled out good after the race and she was good this morning. It’s always a concern when they put in a big effort like that, but so far, we look good.”

The red-and-white floral arrangement, which saw a few pedals hit the Saratoga main track on the way to the winner’s circle from jockey Ricardo Santana Jr.’s jubilant celebration, reinforced to the connections that the CCA Oaks was indeed a milestone for the daughter of Honor Code.

“You come in the barn and you realize it wasn’t a dream,” Atras said with a laugh. “It was pretty cool to see because everyone was celebrating and it’s a team thing. To celebrate with everyone and to see the grooms and hot walkers and exercise riders so happy, it meant a lot.”