After Just a Game scratch, Got Stormy to tackle eight rivals in Poker 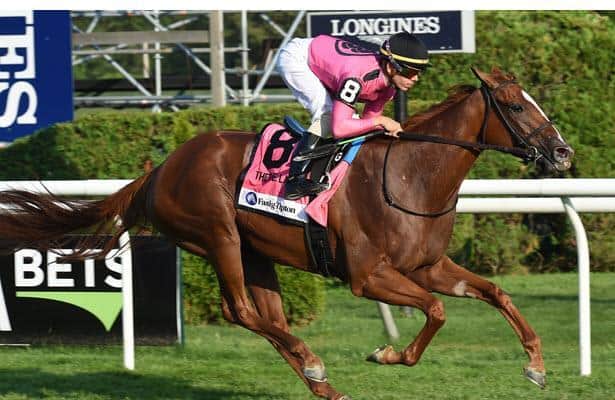 Photo: Janet Garaguso/NYRA
Gary Barber's Got Stormy will once again take on the boys as she looks for the first win of her 2020 campaign in Saturday's Grade 3, $150,000 Poker, a one-mile turf test for older horses on Met Mile Day July 4 at Belmont Park.

In August, Got Stormy, a 5-year-old daughter of Get Stormy, became the first filly to win the Grade 1 Fourstardave, in its 35th running, besting the boys at one mile over a firm inner turf in a track record 1:32 flat at Saratoga Race Course.

Trained by Hall of Famer Mark Casse, Got Stormy would face males in her next two starts finishing second in both the Grade 1 Woodbine Mile, over soft going, and Grade 1 Breeders' Cup Mile at Santa Anita. She completed a stellar season with a win in the Grade 1 Matriarch at Del Mar.

Winless in three starts this season, Got Stormy's best effort came when second by a neck to River Boyne in the Grade 1 Frank E. Kilroe Mile on March 7 at Santa Anita. Last out, she ran fourth in the Grade 3 Beaugay when chasing front-running winner Rushing Fall off a near three-month layoff on June 3 at Belmont.

"The California race was very good. Her last race was disappointing, but we took her out of her element," said Casse. " There was no speed in the race and we tried to keep her closer and that was to her demise. We won't do that again, we'll let her settle."

Got Stormy scratched out of last Saturday's Grade 1 Just a Game after persistent rainstorms soaked the Belmont green. Casse said he made the call after watching Monkeyseemonkeydo win a seven-furlong turf maiden in 1:24.15.

"After watching them run seven-eighths in 24 and change, I said this turf is not for us," said Casse. "She didn't get really good until last summer and her best races are on hard ground. I think the soft turf got her beat in the Woodbine Mile and she was just beat by a better horse at the Breeders' Cup.

"We're just trying to find her top form and I believe it has to do with a harder turf course," added Casse. "She won't get it this weekend at Belmont, but she also likes the sharper turns at Saratoga and Santa Anita because she has a quick turn of foot when you ask her to go."

Hall of Famer John Velazquez, who piloted Got Stormy to victory in the 2018 Wild Applause at one-mile on the Belmont turf, will be legged up on the talented chestnut for just the second time from post 7.

Owned by e Five Racing Thoroughbreds and Michael J. Ryan, Valid Point won his first three career starts topped by a one-length score in the Grade 1 Secretariat in August at Arlington Park. The 4-year-old Scat Daddy colt completed his campaign with an off-the-board effort in October in the Grade 1 Shadwell Turf Mile at Keeneland.

The Elkstone Group's Social Paranoia, trained by Todd Pletcher, offers a consistent record of 14-3-4-5 with purse earnings of $847,210. The 4-year-old Street Boss colt ran second here last year in Grade 1 Belmont Derby Invitational over 1 ¼-miles on the Widener turf to kick off the Turf Triple series. Social Paranoia was an even fourth in the Saratoga Derby Invitational, second leg of the Turf Triple, before winning the Dueling Grounds Derby at 1 5/16-miles at Kentucky Downs.

Social Paranoia made the grade in his seasonal debut with a rousing last-to-first charge in the Grade 3 Appleton, a one-mile turf test on March 28 at Gulfstream Park. He arrives at the Poker from an off-the-board effort in the Grade 2 Fort Marcy contested over nine furlongs on a Belmont inner turf rated good.

Jose Ortiz has the call aboard Social Paranoia from post 5.

Juddmonte Farms homebred Seismic Wave, trained by Hall of Famer Bill Mott, captured the English Channel at one-mile on the Widener turf to close out his sophomore season. The Tapit chestnut, who boasts a record of 12-3-2-2, launched a seven-wide rally in his seasonal debut when charging from last-of-13 to finish fourth in the First Defence, a seven-furlong Widener turf test on June 7 at Belmont.

*Rating is based on HRN fan votes, which rank the Top Active Horses in training.
Got Stormy Poker Poker (2020)