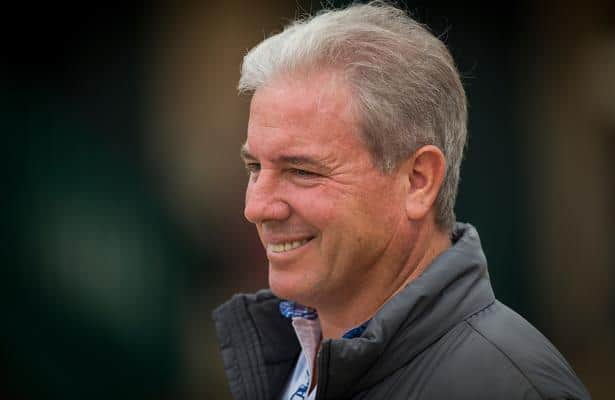 Ten Broeck Farm's Kimari will return to North American stakes action after an impressive runner-up effort at Royal Ascot when she competes as part of a seven-horse field of juvenile fillies in the fifth running of the $100,000 Bolton Landing on Wednesday on Saratoga Race Course's Mellon turf.

Kimari ran second by a head to Raffle Prize in the five-furlong Group 2 Queen Mary on June 19 at Ascot, taking the lead on the straight course at 13-2 odds before 18-1 shot Raffle Prize, under Frankie Dettori, overtook her in the final jumps.

Kimari, who boasts her own legendary jockey in Hall of Famer John Velazquez, arrived in England off a 15-length debut win on April 25 at Keeneland, and trainer Wesley Ward said the travel hasn't impacted the Munnings filly as she settles into Saratoga.

"She's a big, monster of a filly," Ward said. "She's done everything right so far. She came back and it hardly took anything out of her. A lot of these horses, especially fillies, coming back, they'll drop off and lose weight. But she was eating on the plane over and eating on the plane back. Nothing stopped her."

"She's arrived at Saratoga in good order and everything is fantastic," Ward said.

Purchased for $152,000 at the 2018 Fasig-Tipton Yearling Sale, Kimari could be on target for a start in the Grade 1, $1 million Breeders' Cup Turf Sprint on November 1 at Santa Anita, Ward said.

"I have her centered towards the Breeders' Cup Turf Sprint, so we're working from that backwards," Ward said. "We want her to stay as healthy and sound as she is now. We'll have to see how this race comes and how she runs and make a decision for the future, but that's certainly the end goal."

Velazquez, aboard for her first two starts, will be in the irons again, drawing post 5.

Classy Sadie will make the switch back to turf in her second consecutive start at Saratoga for trainer Gary Contessa.

Owned by Pines Stables, John Daley and Paul and Debra Ann Acri, Classy Sadie ran third in her debut on May 2 over Belmont Park turf listed as good. After breaking her maiden at second asking on June 20 on a muddy and sealed Belmont main track in a race taken off the turf, Contessa tried the New York-bred on dirt again in the Stillwater on July 18 at the Spa.
The Emcee filly will now go back to grass in contesting the Bolton Landing at 5 ½ furlongs.

"When you have a 2-year-old this time of year, you have two choices: either they are a maiden and there's lots of opportunities, or you run in a stakes race," trainer Gary Contessa said. "I can either leave her in the stall, or try her in this race. It's a good fit. If it rains, it'll be a good spot for her. So, I'll definitely run her."

Classy Sadie has posted nearly identical Beyer Speed Figures in all three races, notching a 61, 62 and 63 in successive order through her first three starts.

"Her slop race was excellent and she's run the same kind of numbers," Contessa said. "Her stakes race on the dirt was the same kind of number. That's what she is. She's a neat little filly. She's sound. She's fast. She has all the things you need to have, so she's going to run. She's doing well and training well. I'll breeze her Sunday for that race."
Tyler Gaffalione will ride from post 7.
Abscond will look to improve to 2-for-2 in her stakes debut after she edged Ask Bailey by a head to capture a 5 ½-furlong turf sprint on July 21 at Ellis Park. Owned by Apogee Bloodstock and Mike Anderson Racing, Abscond shipped from her training base in Keeneland in preparation for her Saratoga bow.

Purchased for $90,000 at the 2018 Keeneland September Yearling Sale, Abscond will now take a step up in class, drawing post 4 with Hall of Famer Javier Castellano picking up the mount.

Collingsworth Thoroughbred Racing's Persian Queen was also a debut winner, recording a 1 ½-length win on July 25 at Saratoga in a 5 ½-furlong turf sprint. Trained by Carlos Martin, the Union Rags filly sold for $125,000 Fasig-Tipton Kentucky in the fall.

Luis Saez, aboard for Persian Queen's first start, will have the return call from post 3.

Champagne Humor won her only start, topping a nine-horse maiden field at five furlongs on May 25 at Gulfstream Park. Trained by Antonio Sano, the daughter of Distorted Humor will have the services of jockey Luca Panici from post 6.

Vast, trained by Hall of Famer Bill Mott, was a 1 ½-length winner in her first start on July 12 on the Spa's main track and will switch to turf. Junior Alvarado will ride the Lea filly from post 1.