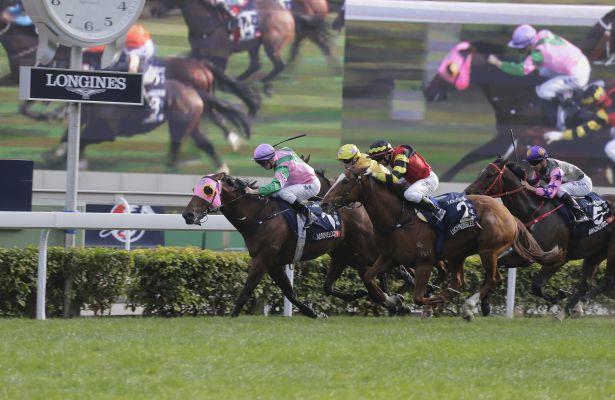 Aerovelocity has long been one of Hong Kong’s most beloved warriors and the eight-year-old achieved one of the more extraordinary wins of his storied career as he tenaciously held off Lucky Bubbles to score his second HK$18.5m LONGINES Hong Kong Sprint victory at Sha Tin today (Sunday 11 December).

No horse older than six had won the Sprint since its inception in 1999 and trainer Paul O’Sullivan had acknowledged throughout the build-up to this year’s edition that he was worried Father Time had caught up with Aerovelocity (Zac Purton). He need not have feared – the bay called on his famed stores of courage and heart to hold out Hong Kong’s emerging star in Lucky Bubbles (Brett Prebble).

Last year’s winner Peniaphobia (Silvestre de Sousa) held on for third after leading, while Amazing Kids (Joao Moreira) charged for fourth to complete a Hong Kong quartet for the second year in a row.

In the process, Aerovelocity made it three wins from three appearances on international day, having won the Class 3 1200m race on the card in 2013 before taking his first Sprint a year later.

The win was greeted by loud cheers from the parochial crowd trackside, as owner Daniel Yeung led a large group waving pink flags and brandishing Aerovelocity plushies. And Purton admitted that despite the horse having achieved so much in his 24 career starts, this win might just have been the most gratifying of them all.

“Out of all his wins, I think this is the most satisfying one because we’ve had some troubles with him,” Purton said. “He has had some problems, he’s older now and Paul had to pull everything out of his trick bag to get him in the condition he is today. I’m just the lucky one to be piloting him.

“It’s a good feeling because we were of the opinion that we were starting to lose him. And we know he’s a warrior and he gives everything he’s got and although he didn’t perform at his best today, his heart is so big that he was able to give us that effort.”

“Paul fine-tuned him and dropped the extra little pounds that he was carrying and got him as best as he could for today so he’s done a great job.”

There were shades of last January’s HKG1 Centenary Sprint Cup (1200m) as Aerovelocity pulled off the back of Peniaphobia and moved up to challenge, and while he hung in badly that day and checked Peniaphobia, Purton said he wasn’t concerned about an issue today.

“There wasn’t a worry when I was doing it because the other day he seemed to straighten up a little bit and I think that’s a sign that he’s not quite the horse he used to be,” Purton said. “He went straight for the majority of the straight and then, obviously, as he was feeling the pinch and under solid pressure he wanted to get in. With 100 metres to go I was very confident of winning but with 50 (metres) to go, I could feel Lucky Bubbles starting to breathe down on me and I was looking at that post and I was praying for it to come quicker and quicker!

“We had a lovely run in the race, though, and he came out and he was just able to amble up. It was hard fought in the end, but he is all heart.”

O’Sullivan had been hopeful rather than confident in the lead-up to the race, saying that he’d had an ideal preparation this campaign but that he was left wondering if the son of Pins was still the same horse this time in.

“I certainly expected him to be competitive, it was just a matter of whether time had caught up with him,” he said. “He’d had probably the best preparation that he’d had going into an international, but he had indicated that he was getting a little bit older – he was taking a little bit longer to come to hand. I thought he’d get some prize money for sure, but to win it is just fantastic.

“He’s had plenty of issues. He had a heart irregularity, he had a significant amount of blood in his trachea on that day, he travelled to Japan last season and got colic. But I said to Daniel (Yeung, owner) before the race today, I can’t get him any better than this. I think he’s peaked on the day, it’s just a matter of whether he’s still got it in him.”

Aerovelocity is known for his pre-race quirks, and O’Sullivan acknowledged that he was pleased to see the horse fired up before the Sprint.

“We saddled him up, I don’t know if he’s broken the mafoo’s arm or not but it has a huge bruise on it!” he said. “And I think if anybody saw him going on to the track, he’s certainly a very quirky horse. But I’d say he’s the bravest horse I’ve ever put a saddle on. Today, he’s been a marvel, an absolute marvel.”

O’Sullivan said that a return to Japan could be on the cards in March, while he wouldn’t rule out Aerovelocity attempting to make history as the first horse to win three Hong Kong Sprints next December.

“He’ll go through the motions now,” he said. “Centenary Sprint Cup next, and maybe he’ll go back to Japan, try for two Takamatsunomiya Kinens now. I don’t think he’ll go to Dubai. The Japanese, as wonderful as their horses are, their sprinters are their Achilles heel.”

Francis Lui-trained Lucky Bubbles had to settle for another second placing after filling the runner-up stall behind Australian speedster Chautauqua in the G1 Chairman’s Sprint Prize (1200m) in May, and jockey Brett Prebble was full of admiration for the chestnut after he overcame trouble to dash home, failing by only a short head.

“It was a pretty rough race and I got shuffled back a little bit more than I would have liked,” Prebble said. “There are a few jocks playing jockeys out there. If I got out earlier he wins, full stop. He is the best horse in the race. There is no better horse in Hong Kong than Lucky Bubbles at the moment.”

Peniaphobia completed a trifecta of sorts in the Sprint, adding a third placing this time around to a second in 2014 and his victory last year.

“He ran a good race,” jockey Silvestre de Sousa said. “It is not an excuse but the horse on my outside pressured me a little bit earlier than I would have liked. Still, I am happy with him.”

John Size-trained Amazing Kids closed solidly for fourth, while French galloper Signs Of Blessing made a tremendous bid from last, running the fastest last 800m of the race in 44.25 seconds. He crossed the line first of the overseas visitors in fifth for trainer Francois Rohaut and jockey Stephane Pasquier.