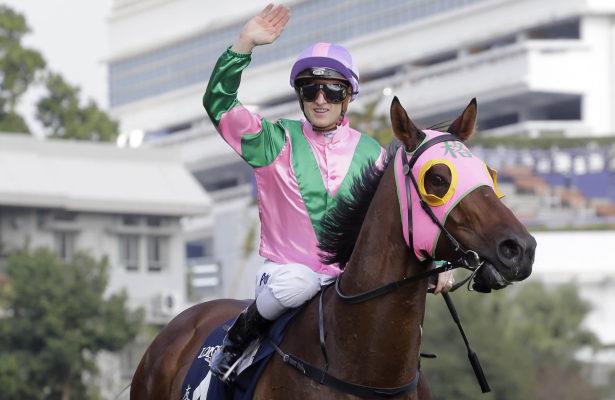 Aerovelocity will depart for Australia and a well-earned retirement at picturesque Muskoka Farm after a farewell ceremony at Sha Tin racecourse on Sunday, 25 June, when his army of fans will have one last opportunity to salute one of the toughest horses ever to have competed on the Hong Kong circuit.

The 2015 Hong Kong Champion Sprinter and four-time G1 victor retires as the only locally-trained horse to have won G1 races in three different jurisdictions, his record of 11 wins from 24 career starts yielding prize money of HK$45,252,368.

But there was always more to Aerovelocity than his latent ability. Every sports fan loves a fighter, especially one that rises through the ranks, defying expectations and reputations along the way. Paul O’Sullivan’s charge had all of that, as well as a heavy dose of brute charisma.

“He was just a warrior, really, a real bulldog,” said Zac Purton, the man who rode him in his last 20 races. “He’s probably the toughest horse that I’ve ever ridden, he goes out there and he leaves everything on the track.”

Toughness is Aerovelocity’s hallmark. O’Sullivan has worked with numberless horses in his lifetime and the former New Zealand champion trainer asserted: “I’ve been fortunate enough to be associated with a lot of great horses; Horlicks and Mr Tiz were world-class and, to be fair, this bloke was pretty close – he would certainly be the toughest and most tenacious horse I’ve ever put a saddle on!”

That grit was manifest multiple times, not least in the gelding’s last win. Two years on from a breakthrough Group 1 in the LONGINES Hong Kong Sprint (1200m) and one year after connections had heeded his negative physical cues and removed him from a defence of that trophy, Aerovelocity bounced back for a second triumph in the 2016 edition of the December feature. And it was achieved in typical battling style; a short-head verdict to keep the young upstart Lucky Bubbles in his place.

It was a fitting final win for a worthy hero who, in the short space of five months from December, 2014 to May, 2015, made history by winning the Hong Kong Sprint, Japan’s G1 Takamatsunomiya Kinen (1200m) and Singapore’s G1 KrisFlyer International Sprint (1200m).

“It does feel like he’s been my mate for a while now and it will be sad to see him go,” Purton said. “I’d say he’s the best sprinter I’ve ridden, he and Little Bridge have both been great to me as I had such a long association with both of them, but Aerovelocity’s obviously got a better record, he’s a two-time Hong Kong Sprint winner and the only horse in Hong Kong to have won three G1s in three different countries in the same season. He’s not a champion like Silent Witness or Sacred Kingdom but for me, of the sprinters I’ve ridden in Hong Kong, he’s at the top of that list.”

Aerovelocity was foaled on 8 September, 2008 at Windsor Park Stud in Cambridge, New Zealand - by Pins out of the Kaapstad mare Exodus. The bay was sent to the Karaka Premier Yearling Sale in February, 2010 where, sent through the ring as Lot 398, he caught the eyes of O’Sullivan and his brother, champion jockey-turned-trainer, Lance. They parted with NZ$120,000 and departed with a future star.

“It was the most we’d ever paid for a horse to own ourselves,” O’Sullivan revealed. “He was just a magnificent yearling, I know when he went through the ring they thought they would get a lot more money for him than what we paid for him. From my eye, he was just a standout yearling.”

But, with O’Sullivan’s Sha Tin operation in the doldrums, convincing others that the youngster was a worthwhile investment proved difficult.

“Lance had a huge opinion of him,” O’Sullivan recalled. “He said, ‘This is the real deal’, so I tried to sell him to every second bloke in Hong Kong, but I couldn’t sell him.”

The O’Sullivans opted to qualify the then unraced youngster as a Hong Kong “PP”, so he was taken to Awapuni racecourse in Palmerston North where, registered as Naisoso Warrior, he won a three-year-old maiden by two lengths for trainer Andrew Scott and jockey Hayden Tinsley.

“He just cantered up,” O’Sullivan said. “I tried to sell him all around Hong Kong again until a bloke called Daniel Yeung came to me. He said he had a friend who had a horse in work with me, so we set up a coffee. We chatted away for an hour, very interesting guy, at the end of the hour he said, ‘I have a PP permit, have you got a horse?’ And I said, ‘Have I got the horse for you?’ That was Aerovelocity.”

The horse drew a blank in his first four Hong Kong starts, all in Class 3, but he did run second on two occasions.

With headgear applied, Aerovelocity raced seven times for five wins during the 2013/14 season, each score arriving in succession. His rating rose from 71 to 113.

The last of that quintet of wins was a bulldozing, cocked head, lugging-towards-the-rail, short-head verdict over Divine Ten in the HKG3 Sha Tin Vase Handicap (1200m).

That desire to feel the white rail against his flank was just one of Aerovelocity’s oddball traits.

“He was a very unassuming horse, he never gave the impression he’d be the horse he’d end up being,” Purton said.

“He’s probably the most unassuming horse I’ve ever ridden. Every time I won a race on him I’d come back to Paul and say, we might be able to win one more – that was from Class 3 right through. He’d win another and you’d think maybe he could get one more. He just kept raising the bar; he kept getting better and better and better. I’m glad to be proven wrong, but he never gave me the feel of a horse that was going to be at the level which he got to.”

The following season (2014/15) he won four from six, his wins included his famous international G1 trio, while one of those defeats was an unlucky unplaced effort when badly impeded in the November, 2014 G2 Jockey Club Sprint (1200m), a race he had looked well-placed to win when turning for home.

Sha Tin regulars will remember the time Aerovelocity put assistant trainer Pierre Ng through the white rail on the walkway that runs from the Parade Ring to the turf track entrance; they can recall the time he tried to bite the outrider after a pugnacious Centenary Sprint Cup win in 2016; the mornings when he would attempt to steam across the sand yard; the mafoos who have nursed sore arms, ribs and shoulders.

Purton would never ride the gelding at trackwork. Even when he did get the leg-up for barrier trials and races, the rider would wait until the horse was well down the walkway before mounting. The antics were all part of Aerovelocity’s aggressive, street fighter appeal.

“He was always a difficult horse to handle,” Purton said. “I never rode him in any trackwork, I was always only the barrier trial and race day jockey for him, just because he’d come out in the mornings and want to go over the top of people. You’d quite often see him, he’d just scatter the sand yard here, coming through, just charging his way through other horses.

“As he went on and travelled a little bit he did mellow towards the end of his career, but he was still never easy. On race day, the hardest part was always trying to get on him going out on to the track but he put all that aggression into his racing.

“Whenever he was in a fight though he was always up for it, he never laid down,” Purton continued. “He liked to bully other horses; he would always want to out-muscle them and that’s why we switched from a full blinker to a visor part-way through his career, just so he could see the other horses coming. I think it really helped him because when he did see them coming, you could feel him surge a bit for you and give you that little bit more.”

The headgear, bright pink to match his owner’s silks, became his trademark look.

Aerovelocity retires a couple of months short of his ninth birthday and O’Sullivan was quick to give credit for the horse’s longevity to Yeung, the man whose first horse turned out to be a star.

“The reason for his longevity is simply that he is owned by the right guy,” the trainer said. “He’s not the soundest horse in the world, and I said to Daniel about three years ago that he wouldn’t last if we wanted to run in everything, all the Group 3s and Group 2s as well as the Group 1s. He said, ‘just run him in the big ones, he’s up to it’, and that’s why he only has five or six runs every year.

“If he was owned by someone who wanted to run him in everything, he’d be well retired,” he added. “And things like, when he was up for a US$1m bonus if he wins the Hong Kong Sprint in 2015 but he had that heart irregularity, how many owners would say no to that? Ninety-nine per cent would say, just run, just run. But that’s why the bloke deserves everything he got. The reason he won the international this time around is solely due to the patience of the owner, no more, no less.”

Overcoming that heart irregularity and bouncing back from the minor colic that scuppered a planned follow-up assault on the 2016 Takamatsunomiya Kinen only enhance Aerovelocity’s folk hero status.

“He’d do anything for you,” O’Sullivan said. “So that’s how he will be remembered by me, he just loves a dogfight and he was good at it!”

Aerovelocity will join another former Hong Kong star, Champions Mile and SIA Cup hero Dan Excel, at his new home. The farewell ceremony will take place in the Parade Ring after race five on Sunday, 25 June.