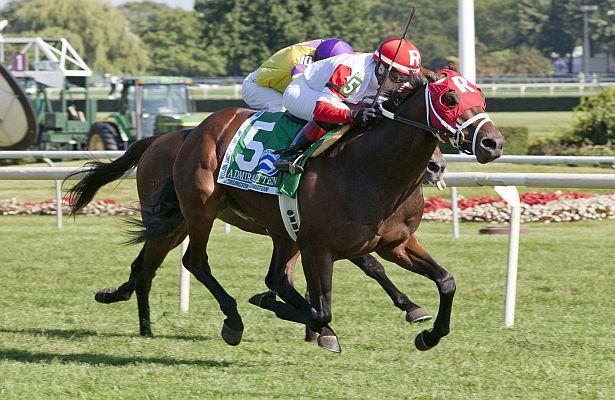 Admiral Kitten will take on familiar foes Stormy Len, Jack Milton, and War Dancer when he aims for his second Grade 1 win in the $500,000 Jamaica Handicap on Saturday at Belmont Park.

The Jamaica, a 1 1/8-mile turf race for 3-year-olds, attracted 13 entries and 12 betting interests, with Admiral Kitten coupled in the wagering with Get In Line. It was carded as the 8th race with a 4:40 p.m. scheduled post time and precedes the Grade 1 Frizette and Grade 1 Foxwoods Champagne.

From April through July, Admiral Kitten finished second in four straight races: an allowance at Keeneland, the Grade 2 American Turf at Churchill Downs, and the Grade 3 Arlington Classic and Grade 3 American Derby at Arlington Park.

Admiral Kitten picked a good spot to post a breakthrough win, sustaining a steady run from 10th to win the Secretariat by 1 ¼ lengths on August 17, one of two Grade 1 wins that day at Arlington for owners Ken and Sarah Ramsey, who also took the Arlington Million with Real Solution.

Mike Maker trains both Admiral Kitten and his entry-mate Get In Line, who was claimed for $50,000 out of a fifth-place finish in May at Churchill Downs. The front-runner enters the Jamaica off a fifth in an off-the-turf edition of the Grade 3 National Museum of Racing Hall of Fame on August 9 at Saratoga.

Rosie Napravnik will ride Admiral Kitten from post 4, with David Cohen set to ride Get In Line from post 11. The entry was tabbed as the 7-2 morning line favorite.

Stormy Len and Jack Milton, second and third, respectively, in the Secretariat, will try to turn the tables on Admiral Kitten in the Jamaica.

Trained by David Donk for Leonard Leveen and Michael P. Shanley, Stormy Len has made an additional start since the Secretariat, finishing third, beaten one length, against older horses in the Grade 1 Northern Dancer on September 15 at Woodbine. He was third by a head in the American Derby prior to the Secretariat.

"I've always felt he was going to make a better 4-year-old than a 3-year-old," said Donk of Stormy Len. "I'm really happy with the progress he's made since early summer. Last time, it was a lot to ask of him to race a mile and a half against older horses. He was little bit rank because the pace was so slow, so it turned out to be a really good effort. There's still a maturity he needs to reach, but it's a big field and there should be pace in the race. He stands as good of a chance as anybody."

Alex Solis, aboard Stormy Len in the American Derby and Secretariat, will be back aboard the colt on Saturday. Stormy Len drew post 7 and was installed at 8-1 on the morning line.

Gary Barber's Jack Milton, winner of the Grade 3 Transylvania in April at Keeneland, finished 2 ½ lengths behind Admiral Kitten in the Secretariat. He also was third in the Penn Mile in June and in the Grade 2 Virginia Derby in July.

Todd Pletcher trains both Jack Milton and New York-bred Notacatbutallama, who has won five stakes, including three at Belmont. Notacatbutallama captured Belmont's Grade 3 Hill Prince in June and the Solar Splendor overnight stakes in July, then added a win in the Grade 3 Hall of Fame in the slop at Saratoga in August. In his most recent start, the Repole Stable color-bearer was second to Jamaica entrant Five Iron in the Grade 3 Saranac on September 1 at the Spa.

"Both horses are very consistent and always run well," said Pletcher of Jack Milton and Notacatbutallama. "In turf racing you need a good trip, and, hopefully, we can maneuver one of those in a full field. A mile and an eighth is a little bit of a tricky race from a position standpoint. The 'Llama' has run well here on numerous occasions. Jack Milton has not [raced at Belmont], but he has run well at Gulfstream and Keeneland and Arlington and Virginia, so he doesn't seem to be particular about his courses. I think both would benefit from a legitimate pace."

Jose Lezcano has the call aboard Jack Milton, 6-1, from post 5. Notacatbutallama, 8-1, will depart from post 13 with Javier Castellano in the irons.

Magdalena Racing and Diamond M Stable's War Dancer got up to win the Grade 2 Virginia Derby by a head in July at Colonial Downs, then was sixth when switched to the dirt for the Grade 1 Travers on August 24 at Saratoga Race Course. He received a Beyer Speed Figure of 98 for his Travers performance, four points higher than his previous best, achieved on the turf in the Virginia Derby.

Prior to the Virginia Derby, War Dancer was third behind Noble Tune and Admiral Kitten in the Grade 2 American Turf in May at Churchill and second in the Centaur in June at Indiana Downs.

"We were confident he'd run well in the Travers, and it doesn't surprise me he ran his best number in that race," said trainer Ken McPeek. "If the race had set up a little better for him, he might have finished better. We could have run in the Secretariat at Arlington or stayed in New York for the Travers, and we felt like he deserved a chance to run on the dirt. The timing of the Jamaica makes it a really good next spot for us, but we're not opposed to taking him back to the dirt at some point."

The 5-1 third choice on the morning line is Balance the Books, who garnered the Stroll overnight stakes by a neck on August 14 at Saratoga. It was his first win in four starts so far in 2013. As a 2-year-old, Balance the Books won the Grade 2 With Anticipation and Grade 3 Bourbon, and was third in the Grade 1 Breeders' Cup Juvenile Turf.

"[The Jamaica is] obviously a really tough race. We'll just take our shot in there," said Chad Brown, who trains Balance the Books for Klaravich Stables and William H. Lawrence. "The distance of the race looks right for us, and he's in good health and is training well. [In the Stroll] he found himself closer off a slow pace, and he still kicked. He obviously needs to step up and come with a career-best race to make an impact on this field, but he certainly is capable of it. It looked like he had a big 3-year-old year ahead of him, and he got sidetracked in the first part of the year. I'm hoping he's rounding back into the form he had going into the Breeders' Cup last year."

The field includes four other stakes winners: Five Iron, Joha, Michael With Us, and Up With the Birds. Mills and Global Asset complete the field.